Fiscal Policy Trade-offs: Interest Spending Not Much Of A Concern 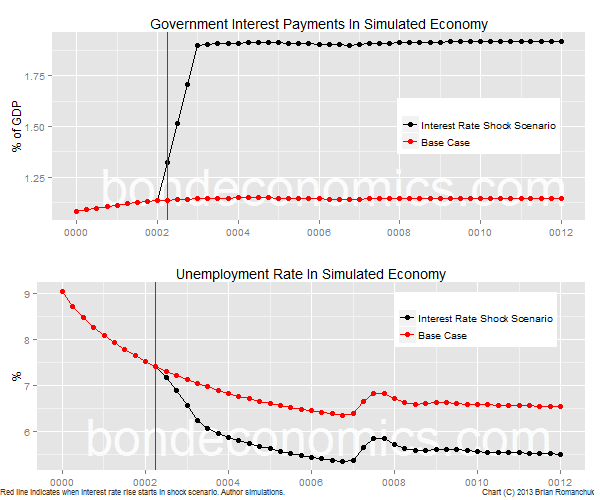 This article is going to be the first of a series which discusses the trade-offs involved in fiscal policy. To illustrate my points, I run simulations on a basic Stock-Flow Consistent (SFC) model, such as the simulation data shown above (see this entry to see my other discussions of SFC models). This model is a teaching tool to illustrate long-term fiscal dynamics, and there has been no attempt made to fit it to real-world economic data. Business cycle dynamics are also deliberately suppressed; I explain why further below.

(Note: I wrote an earlier article, “Why Interest Payments Do Not Pose Fiscal Risk”, which gives a verbal outline of why this dynamic occurs. I hope that the use of the simulation should make the explanation easier to follow.)

My model is a variation of the models discussed in the textbook “Monetary Economics” by Wynne Godley and Marc Lavoie. I have built my model to represent the trade-offs involved in fiscal policy for a modern welfare state, and is less sophisticated than the more advanced models in that text for modelling business cycle dynamics. This was a deliberate choice: if the model economy continuously generates strong business cycles, the outcome of simulations will mainly depend on whether recessions are avoided or not. Instead, my model has fairly damped cyclical dynamics, and slowly moves towards steady-state outcomes.

This model does not follow analytic conventions used in modern Dynamic Stochastic General Equilibrium (DSGE) models, which are the modern mainstream economic analysis framework of choice. I do not view this as a problem, as I believe that DSGE models have been constructed to model monetary policy almost exclusively, and are not useful for analysing long-run fiscal dynamics. I will discuss this claim in follow-up articles; it would be too much of distraction to attempt to cover that topic right now.

How the model largely abolishes the business cycle is that fixed investment is not considered – firm output is determined solely by the number of employed workers. There is investment in inventories, and there are some cyclical dynamics associated with inventory adjustments. (In the chart above, the rise in the unemployment rate around year “0007” was caused by a small overshoot in inventories before the economy reaches the steady state.)

Since there is no fixed investment, there was no need to model private sector financial assets (other than the non-traded equity of the business sector). The only financial asset is floating-rate government debt, which is also used as money (it trades at par). I do not divide government liabilities between non-interest paying money and interest-paying debt, as that distinction is a cosmetic detail in macro models at this level of abstraction.

Fiscal policy within the model is characterised by the following parameters.

I would like to underline that fiscal policy is 100% passive; there is no attempt to change spending or taxes in response to the business cycle. However, taxes and welfare spending will act to stabilise the business cycle. (See my article on the debt limit to see a simulation of what happens if these welfare state programmes are deactivated.) 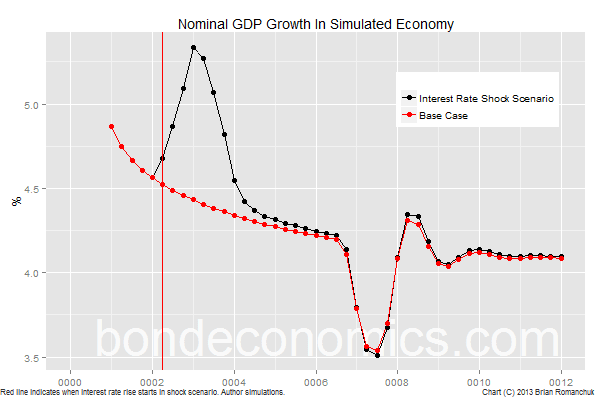 Since the economy is growing at (roughly) 4% per year, if the household sector is to keep its financial asset holdings near a target ratio to its nominal income, the stock of government debt has to be growing at 4% per year. This implies that the government must run deficits, and in the top panel of the chart below, we see that the two scenarios have the deficits roughly converging to the same level. (There is a small difference, as higher interest payments raises household incomes in the shock scenario.) This illustrates the important point which does not appear to be widely understood – an economy growing in nominal terms needs to run fiscal deficits in order to stabilise the ratio of government-guaranteed financial assets (including money) to incomes. 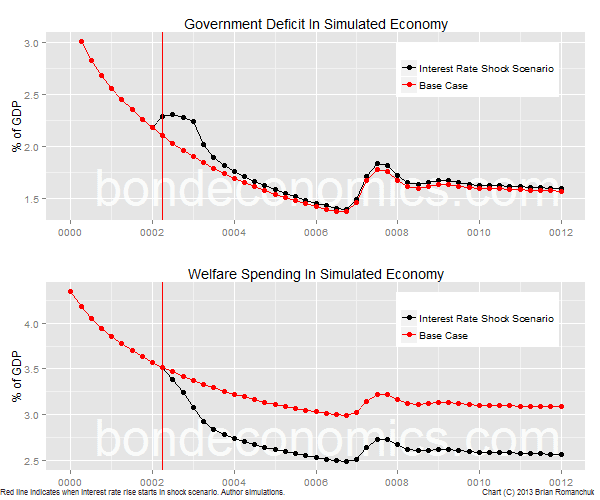 Since the government deficits are essentially the same (as a percentage of GDP) in the two cases, and all other spending and tax parameters also match, the only way that interest payments can rise is if welfare payments fall. As the bottom panel in the chart above shows, this is what happens. Since welfare payments per recipient was fixed, the unemployment rate must be lower in the steady state (as was shown in the first chart at the top of this post).


The standard working assumption in the analysis of fiscal policy is that the government wants to keep its fiscal parameters fixed. The idea is that the chosen policy mix has to be shown to be “sustainable”.  (Of course, in practice, fiscal policy settings are juggled continuously as the result of the political process.)

In the context of this model, that standard is met – no fiscal parameters were changed, even though interest payments rose. Welfare spending fell, because people left welfare to enter the workforce. (A policymaker would have to be somewhat sociopathic to demand the level of unemployment does not fall so that welfare payments are not reduced.) There appears to be a free lunch – crank up interest spending in order to drive down unemployment.

However, this is not really a free lunch – fiscal policy settings are too tight in the base case scenario, and the same reduction of unemployment could have been achieved via cutting taxes. (For those of you who follow Modern Monetary Theory, Warren Mosler pointed out that tax cuts would be preferable to interest income to stimulate the economy.)

The limit to loosening fiscal settings would be the achievement of “full employment”. Inflation generated by excessive demand is the real constraint on government spending. (The view that inflation is the real limitation on government spending was first advanced by Abba Lerner, who called this approach "functional finance". This recent post by Bill Mitchell has a small discussion of functional finance.) This model is not set up to analyse the details of that trade-off; it depends upon how sensitive inflation is to lower unemployment rates. That said, interest rates are higher in the “shock” scenario, which would theoretically act to offset the inflationary impact of a lower unemployment.