The consensus view amongst central banks and market participants is that lower interest rates are stimulative for the economy (and raise inflation). In this article, I give an introduction to what is called the “interest income channel” effect which casts some doubt on this view. The interest income channel could explain why growth and inflation have been more sluggish than was generally expected after the end of the financial crisis.

I will quickly define the interest income channel. In order for an increasing dollar amount of goods to be purchased by the household sector, households have to have an increasing nominal income (or increase borrowing). Wage incomes will rise as the result of increasing numbers of employees, as well as wage inflation. However, people living off of financial assets also need increasing income to keep up with nominal GDP growth. Low interest rates squeeze incomes for that segment of the population.

(Note: This is the first article within the Theme of "Interest Rate Effectiveness"; see that article for more references.)

I have generally seen little discussion of this effect in mainstream analysis, other than responses made by central bankers to older citizens complaining about the pitiful interest income they receive on their savings. The consensus view is that the gains for the overall economy outweigh the suffering of a few pensioners.

However, many unorthodox economists argue that the effect of lost interest income could be more important than the other effects of low interest rates For example, this article by Linwood Tauheed and L. Randall Wray covers this subject in greater depth. This criticism is not new; very similar points were raised in the 1970’s, although the concern then was that rising interest rates were helping to fuel inflation. The question was subjected to a fair amount of analysis. By the mid-1980’s, the mainstream consensus was that the empirical work strongly validated the conventional thinking that lower interest rates stimulated the economy (and higher rates slowed the economy). The Volcker experience provided an example that high interest rates killed inflation.

Over time, I would like to look at the empirical analysis. But I will just show here some of the relevant data, in order to give an idea of the potential magnitude of the interest income channel effect (but please see the notes below). 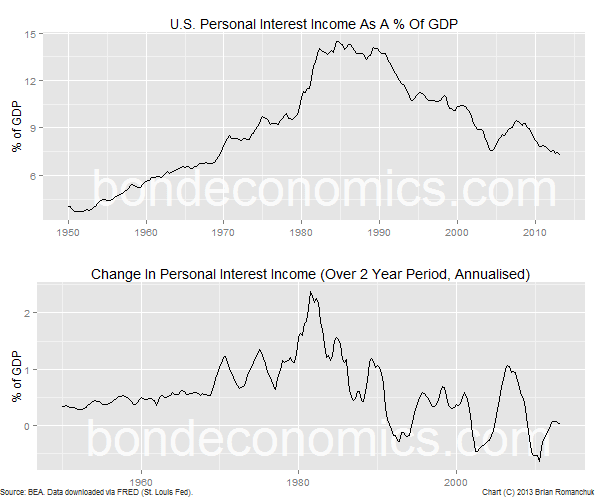 This chart shows what I view as an important difference between now and the 1970’s. People often draw the parallel between the negative real interest rates we have at present and the negative real rates of the 1970’s. Those negative real rates are commonly held to be the source of the great inflation of that period. However, what we saw during that period was a trend rise in nominal rates, and so interest income was rising. This helped the household sector to keep up with inflation. Conversely, the present cycle has seen a drop in interest income, which happened to coincide with sluggish nominal growth. That said, the effect has now leveled off with interest rates being stuck at the same low levels for some time.

Although this chart is suggestive, I will point out that it provides an incomplete picture.
Even with this disclaimer in mind, I argue that low interest rates are a subsidy for the government and corporate sectors at the cost of the household sector and foreign holders of domestic debt. Given that the main constraint on growth in the developed world is sluggish consumer demand, this should be at least a small drag on economic growth.