Primer: What Are Adaptive Expectations?

Adaptive expectations for inflation are based on historically experienced inflation, with a greater weighting on more recent data.


This definition sounds fairly reasonable, in particular when compared to the strong modelling assumptions behind rational expectations (which largely replaced adaptive expectations in mainstream modelling work).

However, in practice, adaptive inflation expectations are calculated as the exponential moving average of historical inflation rates. (Or for those of you who have studied communications systems, the output of a first-order low pass digital filter.) When put this way, the defects of adaptive expectations become more obvious. An exponential moving average is a pretty good filtering function, but it is limited in what it can accomplish.

What Is An Exponential Moving Average?


To calculate the exponential moving average, we need to choose the value for a parameter which determines how quickly the filter “adapts” to new data. For example, assume that we use an adaptation parameter of 0.05 in our filter. In this case, the value of inflation expectations at a point in time is given by the sum of:
Expressing as an equation:

From the point of view of communications systems, the exponential moving average is the simplest possible filter to remove high frequency information from a discrete time series. Since the high frequency components of a time series are typically interpreted as noise, the output of the filter represents the “underlying trend” of the data.

Unfortunately, the act of smoothing out high frequency components creates a time delay in the filtered output. For example, a standard moving average introduces a time lag of roughly one half of the width of the averaging window. Therefore, there is a trade-off involved: getting a smoother output series comes at the cost of a greater time lag in the output.

Comparison To The Standard Moving Average 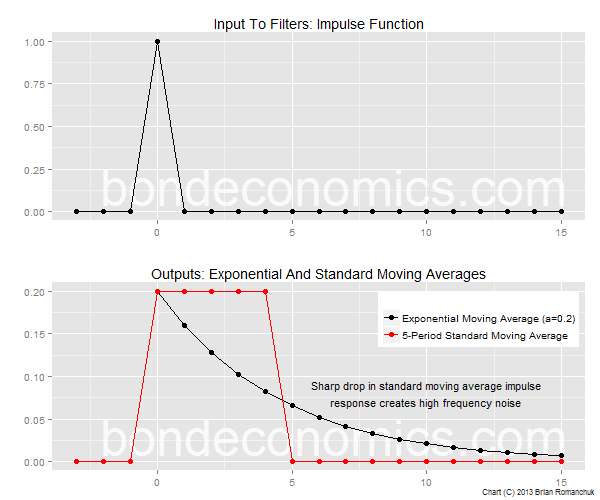 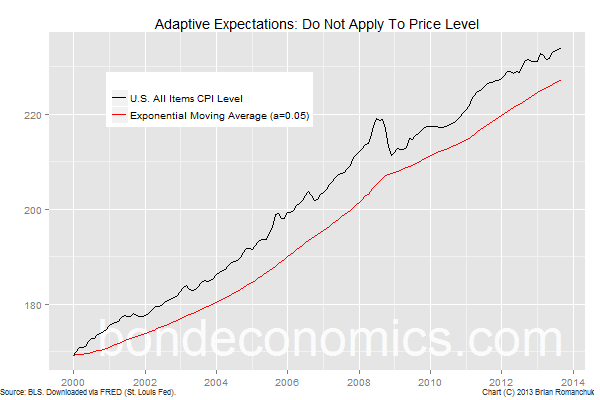 The chart below shows the exponential moving average applied to the U.S. CPI inflation rate, from 1970 to present. Recent performance looks reasonable, but the 1970’s experience showed the problem with the technique. Since the filtered series is always below the maximum up to the point of calculation, the series will lag behind actual inflation if inflation is rising. Additionally, if entities within a mathematical model use filtered inflation to set prices within the model, the model cannot generate accelerating inflation, unless the modeler adding other factors to the pricing decision to push prices higher. 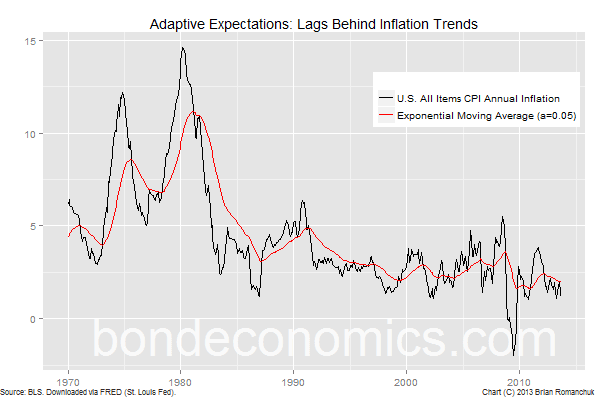 Therefore, it comes as no big surprise that adaptive expectations was abandoned during the 1970’s. The fact that model entities would not react to policy or other information which indicated rising inflation made the models a dubious guide to policy in an environment where consumers and businesses were hypersensitive to information about inflation. As Simon Wren-Lewis discusses in this article, it was inevitable that adaptive expectations would be replaced by something; and rational expectations was what appeared to fill the vacuum.

I am generally in agreement with Professor Wren-Lewis. Economic models that are aimed to simulate the response to policy need to incorporate forward-looking behaviour. However, it would be very difficult to embed more complex inflation forecasting behaviour inside a model without the model turning into an extremely complex "black box" that we have no hope of understanding. That said, the assumptions behind rational expectations appear too strong, and kludges have to be employed to find solutions to even slightly complex models.

In conclusion, adaptive expectations are a useful modelling tool, but their lagging nature means that they are not particularly well suited for generating inflation expectations.