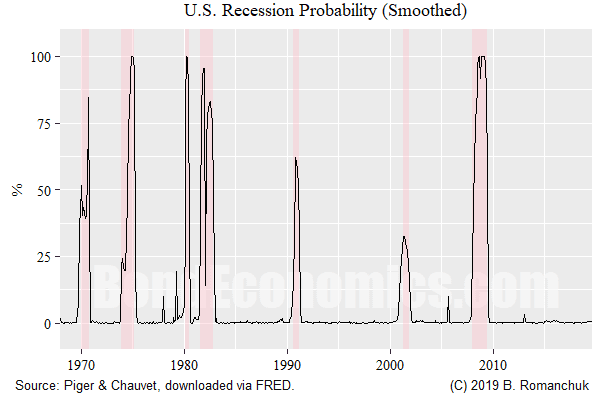 This is a short update of an article I wrote on activity-based recession probability models (link). The difference between this class of models and those relying on forward-looking information is better underlined as a result of recent events. Activity-based models are much less jumpy than those that rely on the yield curve (for example).

The figure above shows the probability based on the Piger & Chauvet model, which looks at current activity variables. It has rolled along with a near-zero probability reading since the end of the last recession. The run of data ends in August 2019, reflecting the publication delay for data.

This is in stark contrast to recession probability indicators that use inputs like the yield curve. As is well known, models and analysts that rely on the yield curve have been flashing recession risks for most of the year. They could be vindicated by history, but we will not be able to make any definitive statements for some time (barring some immediate collapse in the financial markets, which would cashier the expansion in short order via the seizure of credit availability).

To summarise points made in earlier articles (and in my manuscript), these activity-based recession models are effectively an alternate definition of a recession. They are purely quantitative, based on a few key activity indicators. Conversely, the usual way to define a recession in the United States is to rely on the judgement of the NBER business cycle dating committee, that takes a more holistic view of the available data. So far, these two competing definitions have coincided, but one could imagine some strange technical distortion to data that could lead to the model indicating a recession, while the NBER committee says "nah."

The fact that it is an alternate recession definitions means that the signal is reliable -- very few false signals. The downside is that such models are not really a forecasting tool, which is what financial market participants really want.

(I have had a large number of distractions pop up this week, so this is once again a short entry.)