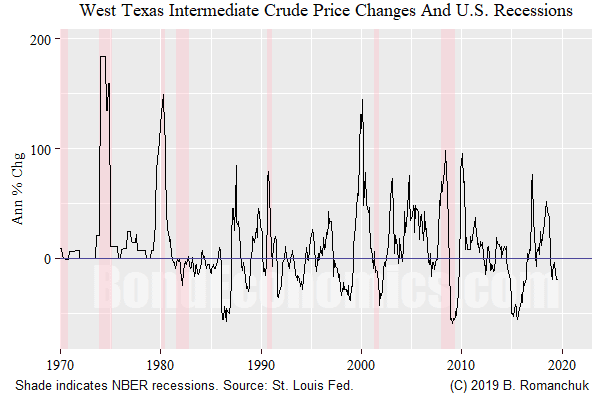 (This article is a short unedited excerpt from my manuscript on recessions. I just added the section, as I found that it was a key missing topic of discussion. I discussed this subject in my earlier book - Interest Rate Cycles: An Introduction.)


Another possible mechanism to generate a recession is that the rise in the price of imported necessities will reduce the demand for domestically produced goods. The most important example are the various oil shocks that started since the 1970s. Although oil shocks were the historical experience, one could imagine massive simultaneous crop failures causing similar problems. Oil price spikes are somewhat distinct from most discussions of the “external sector” as the price of oil was rising relative to all currencies, so this is not related to the usual concern of a single country having facing adverse circumstances with trade.

The fact that oil price spikes have preceded U.S. recessions since the early 1970s (figure above) is heavily cited in discussing the importance of energy prices in creating recessionary conditions. The argument is straightforward: industrial societies are heavily dependent upon hydrocarbon energy sources, so a spike in energy prices has a depressing effect on economic activity. There are a few channels for this effect. The first is the redirection of income flows towards oil exporters (and most developed countries are oil importers), which is why I lump oil price spikes with external sector sources of recession. The next problem energy price spike pose is that the rise in energy costs for consumers means that they redirect spending, implying that other sectors of the economy will face falling revenues, and thus risk bankruptcy and/or lay off staff. Finally, the uncertainty about oil price spikes (and falling revenue) will depress investment in industries that do not benefit from higher energy prices.

There is no doubt that an energy price spike will be a negative for growth. There are two ways of generating such a spike in a country: oil prices rise versus all currencies, or the currency of the country collapses. The cost of “strategic imports” is probably the main reason to fear a currency collapse (the other main concern being food prices).

Nevertheless, I would not lean too heavily on the “oil price spikes cause recessions” theory, which was popular in Peak Oil circles. Not all countries are oil importers – an oil exporter welcomes the higher price. Not all countries have the same recessionary periods as the United States, even though oil prices were spiking in all major currencies at the same time. Even for the United States, the recessions since 1990 coincided with problems in the financial sector that would have derailed the economy anyways.

I expect that I will return to this subject in the planned second volume on my book on recessions, as part of an analysis of the explanatory power of differing recession theories while looking at the historical experience across multiple countries.

(If one wanted to fit this text in with current events, one may note that the Peak Oil'ers argument that recessions are caused by oil price spikes was not disproved by the events in 2019, under the assumption that we will manage to avoid a recession.)