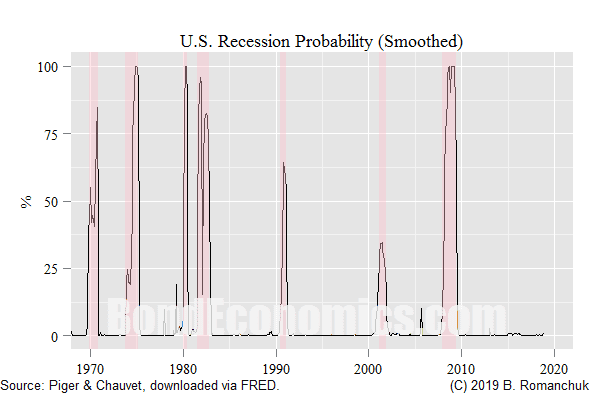 There are two broad classes of models that produce recession probabilities: those that are based on activity variables, and those that use indicator variables to generate forecast information. This article discusses the former category: models that are based on activity variables, which provide a coincident recession probability. Forecasting models are obviously more interesting, and attract the most research attention. However, activity-based models are more reliable, to the extent that data are not revised.

The figure above shows the (smoothed) recession probability for the United States generated by the model of Jeremy Max Piger and Marcelle Chauvet.* As can be seen, the probability for the latest data point (October 2018) is nearly zero, despite the signals of standard probability indicators (such as yield curve flattening). Note that the end point of the series is behind the date of update (early January 2019) as a result of the publication lag of the economic data. As a result, the model is not truly coincident, but lags as a result of the publication delay. That said, one may note the absence of false recession signals in the back history, which is not a feature of recession forecast models.

The model is a Markov-switching model, where there is a hidden state variable that jumps between two regimes: high growth, and low growth. In this case, the low growth regime is associated with negative growth, or a recession. If the state is in the expansion state in one month, the most likely transition is to remain in the growth state. However, there is a low probability of jumping to the recession state. The recession state is less sticky than the growth state, which matches the tendency of recessions to be short-lived versus expansions.

The above variables were not arbitrarily picked; they are key variables that are tracked by the NBER recession-dating committee. One way of looking at this model is that it provides an alternative purely quantitative recession definition.

One could choose alternative activity measures; the simplest is to use real GDP. The use of real GNP was one of the first variants of this model, as developed by J.D. Hamilton.** One disadvantage of GDP (GNP) is that it is quarterly, which is somewhat imprecise given that recessions can be short-lived. However, it may be that quarterly data would need to be used in some countries with data limitations.

One of the useful features of the Chauvet and Piger model is that it is fairly robust with respect to data revisions. In fact, the cited paper was an analysis of the usefulness of the model when applied to data available in real time (as opposed to after revisions). My instinct is that the importance of revisions will be much greater if one attempted to fit a similar model to GDP.

One of the beauties of this model is that it is largely independent of the macro wars. It is purely a summary mathematical description of economic activity, and somewhat theory-free. At most, the models may be incompatible with some potential macro economic models, but this would likely only happen if the model was itself completely unable to generate economic time series that resemble real world data.


Is There a Simpler Way?

The key to this model is that it provides a probability of being in recession. It may be that the user does not need such a probability, in which case, the model may be overkill. There are two simpler alternatives.
Given that the PCA analysis provides a more general tool, I would view it as being a higher priority for market economic research.

One of the problems with these models is that certain model parameters are estimated based on the entire available history. This means that we should be cautious about trumpeting the in-sample performance of the model, since the model technically has access to some future information. The hope is that these model parameters will be stable over time, and so the model will not blow up as we enter new regimes. (I looked at this very briefly, and I did not see any obvious concerns. I would need to re-build the model myself to get a better handle on this issue.)

Another technical issue is the possibility that the estimation procedure could split the high growth/low growth regimes differently. For example, if there is a secular change in growth rates, the state variable could correspond to the decades of high versus low growth. This was discussed in the Hamilton paper (page 372), but it was not clear to me how applicable it is to the Chauvet and Piger model at the time of writing.

Activity-based recession probability models are useful for providing a robust summary of coincident economic data. However, most market analysis revolves around forecasts, and so a coincident model does not appear too exciting (when one takes into account publication lag). As a result, it is unclear how far one should pursue these models, at least for the United States.

* Chauvet, M. and J. Piger, “A Comparison of the Real-Time Performance of Business Cycle Dating Methods,” Journal of Business and Economic Statistics, 2008, 26, 42-49.