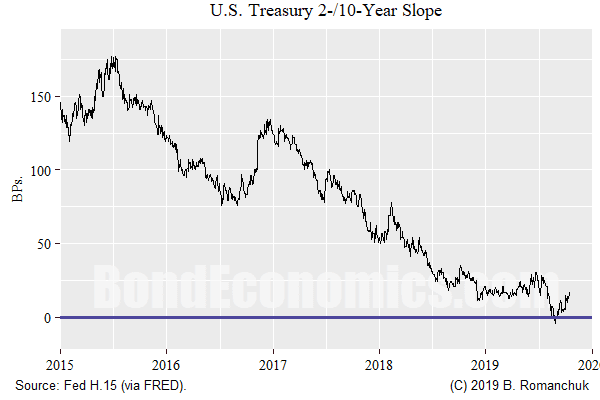 My main writing duties have been cleaning up my manuscript. One of the sections I was looking at discussed how the manuscript text was mainly written by early 2019, and I am not attempting to have it capturing the latest data. One scenario that was obviously embarrassing would be a recession starting before the official publication date.

If we are to believe the conventional interpretation of the yield curve, that odds of that outcome has receded. The figure above shows the 2-/10-year slope, which was only mildly inverted. (The 3-month/10-year slope is probably better as a recession indicator, but the 2-/10-year is the trading vehicle. Duration matching a 3-month bill versus a 10-year note is not exactly a sensible structure.)

We are back where have been for a few years: a dead flat curve. This is not necessarily a statement about recession risks, rather the direction of Fed policy. The lack of acceleration in the economy has to be telling Fed officials that their estimate of "neutral" rates has to be close to current levels. As such, the risks for the next move in interest rates is symmetric. Given the massive demand for duration matching and the age of the current cycle, there is no obvious reason why there should be a large positive term premium in the Treasury curve at this point.

My argument is that we need a large change in the propensity to invest in order to generate some cyclical excitement (in either direction). I confess ignorance as to what might cause such a change in animal spirits, as there are no obvious suspects for change, other than developments outside of North America.

As one final theoretical point, the Fed rate cuts will probably be interpreted as a triumph for interest rate policy by neoclassicals. One could use recession forecasting models based on the yield curve to argue that there was an elevated risk of recession. Policymakers note the risk in their meeting minutes, and cut rates in response. The curve disinversion lowers the estimated probability of a recession. Using the highly scientific "narrative" method that is approved by the "Top 5" economics journals, this means that monetary policy prevented a recession. Meanwhile, the fact that the theory that monetary policy is utterly ineffective is also consistent with observed data is not going to get published in a "Top 5" journal, and so we can safely ignore it.