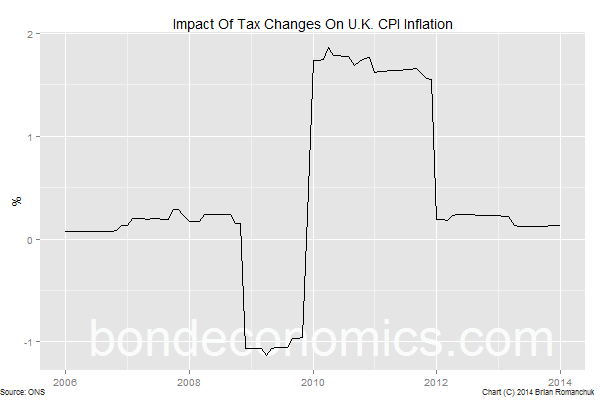 One of the problems of studying inflation in a low inflation environment is that special factors may have a larger impact than underlying economic forces (like the output gap, wages or import prices). This makes inflation modelling difficult, and data interpretation is strained if you do not take those special factors into account. One of the largest impacts can occur from Value-Added Tax (VAT) hikes, which mechanically raise the price level in a country. The chart above shows the experience of the U.K., where various tax hikes raised CPI inflation by almost 2% in 2010-2011. Despite the belief that bond investors are supposed to have a Pavlovian aversion to inflation, this was actually bullish for bonds. I discuss this point here, as well as the issue of U.K. inflation sensitivity to the pound.

In 2010 and then again in 2011, the U.K. central government raised consumption taxes, which had the effect shown above on CPI inflation. In interests of space, I will avoid discussing whether hiking consumer taxes was a particularly good idea at that point in time. This hike, as well as the weakness in the British Pound (which I discuss further at the end of this article) meant that inflation broke well above the Bank of England's inflation target. This was despite the weakness in the economy, which was expected to lower inflation. The chart below shows how this move helped created a mini-"stagflation" panic in the U.K. 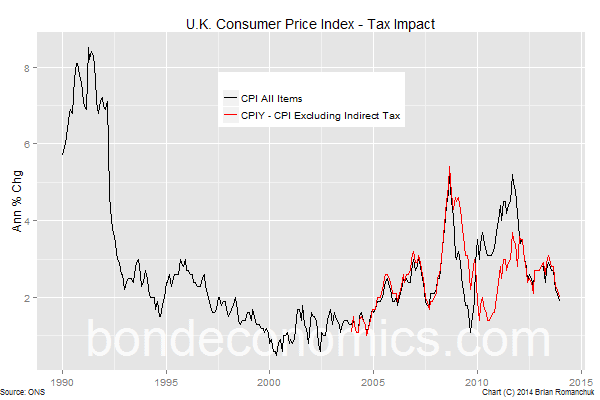 The chart shows CPI inflation, and the CPIY measure - in which indirect taxes are stripped out of prices. (The chart at the top, which is the direct measure of the impact of tax changes,  is not the spread between these two measures, rather it is calculated on the basis of holding tax rates constant relative to a reference period.)

The impacts of the tax hikes can be summarised from a number of points of view:


Japan is about to undergo the same sort of experimentation shortly. People who forget to strip out the impact of taxes on the price level will probably declare "Abenomics" a success in terms of breaking the hold of inflation. The raising of consumption taxes will be restrictive for Japan, even though they are attempting to cut corporate taxes to balance the consumption tax hike. The reason why there will be a net tightening is because the same dollar amount of consumption taxes is much more effective in suppressing demand than the same dollar amount of corporate taxes. Since mainstream modellers avoid thinking about distributional issues as much as possible, this effect is ignored. 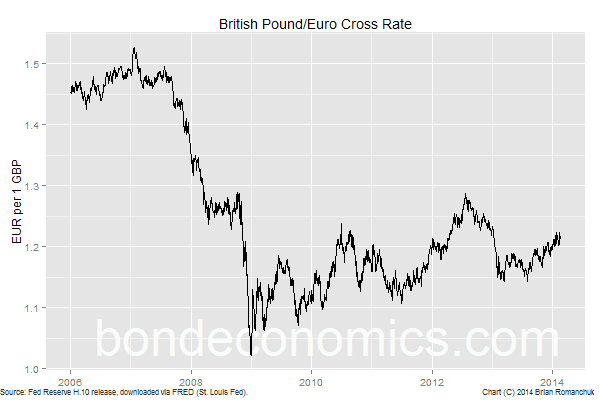 One of the impacts of the financial crisis was that the British pound cratered. This certainly raised the U.K. inflation rate by some amount, as imported goods prices would rise. The question is: by how much?

Based on the chart of CPIY inflation, the upper bound for the effect would have to be around 2% for a couple years or so. Based on the experience of other developed countries, outright deflation appears to be difficult to achieve. (The U.S. was hit a lot harder, and it still avoided deflation.) And I would emphasise that I view 2% as an upper bound, my guess would be a number closer to 1% or so. Given that the pound fell around 25% (using averages) versus the euro. this sensitivity does not appear extremely large. (Note that the trade-weighted pound fell by less than it did versus the euro; I do not have the time series handy.) In any event, the consumption tax hike generated a price level shock which was at least as large as the currency effect.

And like the VAT hike, currency falls cannot be sustained indefinitely (as long as inflation is controlled, like it currently is in the developed world). As a result, I do not worry too much about the value of the currency, as I discussed in this recent article.

As a final aside, this article by Nick Edmonds discusses the impact of the weaker pound on U.K. trade. His takeaway:

Nevertheless, the other notable thing about these graphs is the strong upward trend in the UK's import ratio.  The decline in the exchange rate halts this for a while, but we can see that it is then starting to resume its upward course.  The growing propensity to import remains one of the UK's greatest long-term constraints.

I have never spent too much time analysing trade balance trends; my bias is that they are driven by industry-specific factors (anti-pollution regulations pushing dirty industries overseas), relative wage costs, as well as savings rates differentials. These are structural factors that move slowly, and are not easily dealt with by the standard macroeconomic policy levers. As a result, I do not have a firm opinion as to how strong the trade constraint that Nick Edmonds identified is.