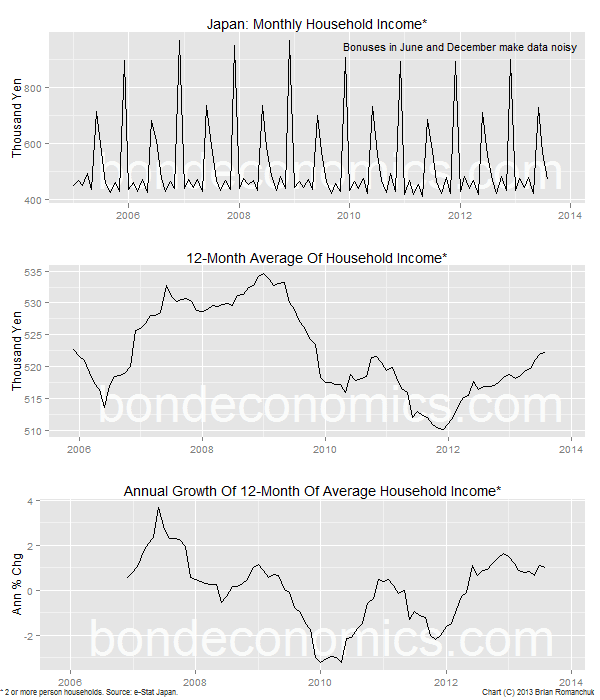 One of the more interesting initiatives undertaken by Japanese Prime Minister Shinzo Abe in his "Abenomics" programme is a push to get companies to raise wages. If Japan wishes to have a steady positive inflation rate of 2%, it will need to get a mild wage-price spiral going. This wage-price spiral will probably have to get underway before the hike in the Value-Added Tax (VAT) hits the economy. The government is planning on using infrastructure spending to dampen the blow of the VAT hike, but there are a lot of historical precedents that indicate that this policy mix may still end up being a drag on growth. The risk is that the Japanese domestic economy will do a faceplant once again when hit by a tax hike.

It is difficult to monitor the efforts to raise wages. The chart above shows the Japanese monthly household wage data. As the top panel shows, there are bonuses paid in June, July and December which greatly distort the series. Attempting to calculate a seasonally adjusted series makes little sense, as this would give the months with bonuses the same weight as other months in the series. In the second panel, I show the 12-month moving average of wages, which means that each point now includes a full annual bonus payment pattern. This smooths out the series, but effectively introduces a time lag. As a result, it will take time for any rise in wages due to this initiative to show up in the smoothed series.

The bottom panel shows the annual rate-of-change of the smoothed series. It is rising at an annual rate of 1.0%, which does not appear to pose much of an inflation risk when you take into account the fact that workers should be more productive over time. 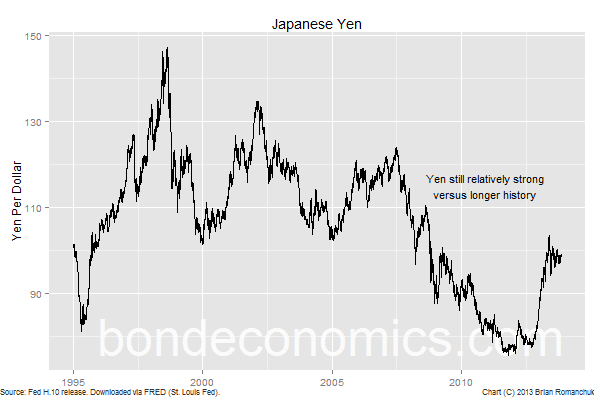 Another possible source of inflation in Japan is the fall in the yen. As the chart above shows , the yen weakened rapidly in response to the announcement of "Abenomics", but has since stabilised near the 100 yen level (reminder: an increase in the number of yen per dollar means a weaker yen). Despite the headlines, this is still a relatively strong when compared to the past 15 years.

The drop in the yen helped create an upward bump in the level of the CPI. However, since the yen has not been steadily depreciating for an extended period, this is a one-off adjustment, and not inflation. Inflation implies that the price level is rising over an extended period of time.