It’s A Trap! (Review Of The Two-Income Trap)

The Two-Income Trap, by Elizabeth Warren and Amelia Warren Tyagi (her daughter), explains the dynamics that has left U.S. middle class families in a fragile financial state. The book is from 2003, and thus is from the era before the financial crisis. However, the problems they highlight still exist. In this review, I discuss the principle observations of the book, and the implications. The implications for planning personal finances for a couple are important. I will also touch on some of the policy issues they raise; although the authors attempt to strike an optimistic tone about solutions, I explain why I am somewhat pessimistic about this problem from a public policy standpoint.


Starting around the 1970’s, women started entering the work force in large numbers, and families switched from having a single wage earner (the husband) to two incomes becoming the norm. Having two wage earners superficially appears to make the family’s finances more secure, but the reality is that they have become less secure.

The reason for the increased insecurity is that there are now two members of the household exposed to the risk of job loss. (The odds of a family member losing a job roughly doubles, if job losses are assumed to be random.) Meanwhile, there will only be one person available to look for work to replace lost income. In a single-earner household, the historical pattern was that both adults would be able to look for work after the husband lost his job. Although women were not exactly treated fairly in the work force (and a stay-at-home mom presumably had a weaker resumé), it was still possible to earn enough to keep the family going.

The end result is that current two-income households are more likely to lose their jobs than the 1973 single-income household, and they are at greater risk of rapidly going bankrupt in consequence.


A common argument for financial fragility for households was due to frivolous spending. Their analysis shows that amongst discretionary spending, the average spending habits showed shifting amongst categories, but total spending across most categories was unchanged. The increase in spending was mainly in the following categories, which are all fixed costs for households:


The authors trace this increased spending to one driving factor – children. Parents have used the extra income from the second wage-earner to bid up the price of houses near good schools, and the cost of education. Even cars purchased are larger (SUV’s) to fit those massive child seats. As a result, having children is the best predictive variable for personal bankruptcy.


The book discusses “The Financial Fire Drill”: three questions to ask yourself if you are in a two-income family.


They note a counter-intuitive part of personal finance: it is preferable that your spending is tilted towards optional frills than “necessary” fixed costs (assuming that you are at saving at least some of your income). If your spending is optional, you at least have the option of cutting back your spending if something changes.

The problem that households face is that the period of time of unemployment is unknown, so it is difficult to know whether it is necessary to invoke the “emergency backup plan”. For example, one could sell a second car, or pull the kids out of private school. However, it does not make sense to make drastic moves that you would have to undo if you do find a job within several weeks, which is a relatively common occurrence. The obvious risk is paralysis, and not taking necessary steps in the hope that things will eventually turn out. This is why it may be best to commit yourself to some form of plan that you mechanically follow as time passes.

The book also discusses other issues, such as personal bankruptcy, reflecting Elizabeth Warren’s expertise in that area. One problem that many households face is that they do not know their rights, and are often taken advantage of by financial creditors who insist upon repayment of debts that were actually discharged in bankruptcy. I will also note that this and other topics is written in a non-technical manner, but has extensive endnotes and a technical appendix if you want to dig deeper.


One point to note that the book is focussed on problems for the middle class. Welfare state programmes are correctly aimed at the poorest members of society, and income support cannot replace a professional salary.* However, raising people from being poor to being broadly middle class is an aspiration that no North American politician I am aware of would disagree with – although there is no agreement of how this can be achieved. Having large numbers of people crashing out of the middle class back into poverty is not a welcome development regardless of political views. Unfortunately, there are no obvious solutions for these middle class problems.

Elizabeth Warren is currently a Democratic Party Senator for Massachusetts, and even is seen as a possible presidential candidate. She is generally viewed as being on the left wing of the Democratic Party, but such a stance is not too obvious in this book (to me at least; I imagine a libertarian might find lots of embedded politics). The problems identified in the book are the result of market forces interacting with government policies, and any solutions are not readily categorised on a Left/Right axis.

One example of this is their comments on day care. Although subsidised day care is typically viewed as a liberal policy, they are not in favour. Subsidised day care is a transfer towards two-income households (and single-parent families), and offers nothing to single-earner households with one parent at home. This transfer of resources would probably just free up more space for two-income households to bid up the price of other items, putting single-earner households at an even greater disadvantage.

They also point out some unintended consequences of liberal reforms. For example, banks used to ignore the wife’s income in determining the size of mortgage they would grant. Although it was good to eliminate this chauvinism, this change is what made it possible for two-income households to build up fixed commitments that cannot be easily serviced. 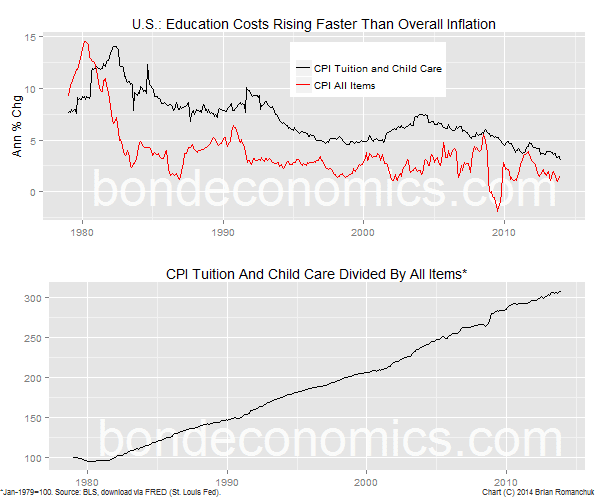 Another example is the well-known explosion in tuition costs. As the top panel of the chart above shows, the category of the CPI for Tuition, school fees and child care has had an inflation rate above the overall CPI since the very early 1980’s; it has taken an oil price spike for all-items CPI to catch up to education costs. This has meant that prices in this category have risen by a factor of 3 in constant dollar terms over the period 1979-present.

The interpretation of the authors (with which I agree) is that the extra income from the second parent was used to bid up the price of education. As they note, grants to universities from governments have risen faster than inflation, but this has not been enough to cover exploding costs. Student debt has exploded in order to finance this.

Since this price rise is demand driven, it is incorrect to blame this on shiftless government-paid teaching staff. Rather, costs have mounted as Universities all attempt to become above-average. The wave of dollars from parents (and student loans) has allowed administrators to self-aggrandise, building extremely expensive sports programs, infrastructure, and paying themselves handsomely for their “leadership”. Even if the government stepped out of the picture, market forces would probably have achieved the same outcome – except that the whole thing would have been financed with even more punitive student loan structures.

Given the market structure, the authors suggest freezing tuition costs in public universities. This would hopefully dampen private university costs as well. This would not be a subsidy, rather the cost expansion would have to be reversed: admin staff cut back, teaching loads increased at the cost of higher prestige research, and sports budgets gutted.


Another suggestion the authors make regards the re-introduction of usury laws (laws setting a maximum interest rate that can be legally charged) for household borrowers. If there is a maximum interest rate in place, financial institutions cannot profitably loan to high-risk borrowers. There is not enough of a spread to compensate for default risk. Bankers have no choice but to boring and staid. (It is clear when reading the book that it was written before the crisis. Subprime lending is characterised as the most profitable market for banks. It was, but the banks’ finally bit off more than they could chew starting in 2005. Just as Minsky’s views of the financial sector would predict.)

I believe that the complete relaxation of usury laws in the 1970's was a mistake (although they needed to be changed into a spread over a short rate in order to survive the Volcker Madness that infected the Federal Reserve). But the problem is – getting there is going to be very difficult, and politically unpalatable. If a limit on spreads for personal credit was put in place, there would be a vast number of households who would be cut off from credit market access. Doing this without any compensatory actions would cause a Depression in a monetary economy. The financial cost to make it possible would be spectacular, and extremely unpopular amongst households who have managed their finances prudently. Such a change would have to be phased in over a long period of time.

But even if usury laws came back, I am unsure whether they could stick. Payday lenders achieve an extremely high effective interest rate, and they do this without explicitly charging interest. They achieve this subtracting a small charge on the cheques they buy. If the customer is forced to keep rolling their cheques, they are effectively borrowing at a high effective interest rate. Other creditors will be happy to apply financial engineering techniques to embed charges into credit agreements, “enhancing” the yield. For example, there is considerable optionality embedded in mortgage contracts. As the Canadian banks have demonstrated, it is possible to make that optionality very expensive for borrowers.


This book is full of out-of-date statistics, which may be a problem for some. The trends they discussed were stable during the 1995-2005 period, but the financial crisis presumably changed things. However, if you are like myself and not worried about the exact numbers, the underlying principles are probably still there.

It is also based on U.S. data. But from a Canadian perspective, the principles in this book offer a very good explanation of what is happening here now. Tough mortgage underwriting standards were in place in Canada until the very end of the 1990’s. Canadian house prices, other than in Vancouver and Toronto, were very cheap on an international perspective (and even Toronto was not that expensive considering that it is a financial centre). But the loosening of standards allowed the middle class to bid up house prices in suicidal fashion. As in the U.S. before the crisis, the strong housing market has obscured the underlying fragility.

* For example, the Modern Monetary Theory (MMT) Job Guarantee. Although a job is guaranteed for everyone in such a programme, it is at a wage that will be in the neighbourhood of the minimum wage. Randy Wray (an academic prominent in the development of MMT) has noted that this may not be much use to a high-income professional.


Finally, the book is available at Amazon at: The Two-Income Trap: Why Middle-Class Parents are Going Broke (affiliate link).