How To Use Aggregate Indicators 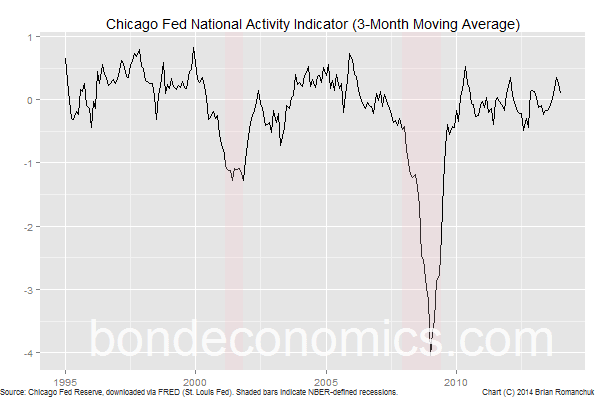 The overall trend in U.S. economic data has wiggled lower recently. In this article, I discuss a few indicators of the overall direction of the economy, and I give an introduction to how economy-watchers should use these types of indicators.


As has become apparent over the few years, the trend in the labour market is the most important driver for Fed policy. One could argue that inflation is more important (despite the dual mandate, the Fed appears to care more about inflation than unemployment), but this is embedded in my statement. Wage inflation is a key factor behind core domestic inflation; the central bank can do little about things like energy prices or the level of the currency (as I discussed in my previous post). And wage inflation is presumably determined by the state of the labour market.

However, the labour market data is coincident with the economy. What fixed income investors (and forecasters) need are forward-looking indicators for the labour market. Businesses hire people if revenue is growing; hence the need to forecast economic growth.


One way of gauging the trend in the economy is to follow the news flow on a release-by-release basis. At an extreme, some market gurus have a particular set of indicators that they believe offer the best forward guidance. As every economic release hits the newswires, there is a flurry of reports sent out, explaining what the data mean.

These reports are quite useful - if you know how to use them. If you are already following the economy, you should have an idea of the structure of the data, and you should understand the context. You probably also know the prior views of the person writing the report. As a result, these reports aid your ability to update your views over time.

However, the reports may be too persuasive for people who do not watch the economy on a full-time basis. Since the people writing the data responses for a large firm cannot change the house view based on the latest data point, almost all reports “spin” the data to match a pre-determined macro viewpoint. (E.g., if the data is weaker than your house forecast, you “discover” that the weather was bad.) It is very easy to just select the reports that match your bias (confirmation bias) - a fact which can be verified by reading “doomer” web sites.

An additional problem with just looking at a few favourite indicators is that they can break down as circumstances change. The best example is the ISM Purchasing Manager’s Index – even though it may be good at forecasting the manufacturing cycle, the collapse in manufacturing employments means that this is no longer significant for the overall labour market.

As a result, if you do not want to make economy-watching a full-time job, you probably should work with aggregated indicators for the economy. These are based on a wider range of data, and are less susceptible to “anecdote risk”.


The Chicago Fed National Activity Index (“CFNAI” - website link) is one of the best public domain aggregate economic indicators for the United States. It is shown at the top of the post, and the 3-month average has hooked down to 0.10 in January 2014 (it was released yesterday). (As a sensationalist blogger, I should be highlighting the fact the latest monthly value was -0.39, but the reality is that the single-month figure is quite volatile. The November figure was 0.73, and one could have written that the economy was ready to take off into the stratosphere.) The index is designed such that “0” represents the national economy growing at a trend pace. (This means that it has to get fairly negative for it to signal a recession.) As a result, the 3-month average being positive is an indication that the economy should be growing slightly above trend, but momentum is slipping away.

The CFNAI is meant to be a coincident indicator – what is happening right now. In other words, it should go up and down at the same time as GDP. For historical analysis, one might as well use GDP. However, GDP comes out with a lag, and the data are heavily revised. Considering how people like the Fed did not realise the economy was in recession in 2008 – despite the fact that the recession started in December 2007 - having a good feel for what is happening at present is a lot less useless than “economic expectations purists” would have you believe.

The construction of the CFNAI should be interesting to a fixed income analyst – it is a Principal Component Analysis (PCA) of 85 economic indicators. The developers used PCA – a statistical technique – to extract the “underlying trend” of all of those indicators. PCA will implicitly adjust variables to take into account their differing volatilities, which would be difficult to do if you did something basic like take the average (mean) of a bunch of series. This statistical technique is used in fixed income analysis to describe yield curve changes. The “first principal component” of the yield curve represents a typical shock to the yield, which varies slightly based on maturities (e.g., when interest rates are well away from zero, yields on shorter-maturity bonds typically move more than yields on longer-maturity bonds). 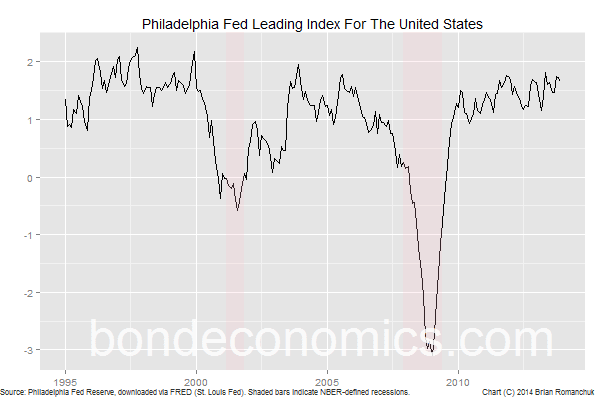 The problem with the CFNAI is that it is coincident; it tells us what is happening now, but traders want to know what will be happening in the future. So the idea is to concentrate on variables that appear to offer leading information about the economy.

These LEI’s are good if you are an observer of the economy – e.g., a central banker, an economist for an industrial firm, or a blogger who does not give investment advice – but they are somewhat problematic for investors. The reason is that they incorporate financial variables within them. In the case of the Philadelphia Fed Leading Index, it incorporates the 3-month/10-year slope. The Conference Board changes their LEI over time, but it includes equities in addition to a yield curve measure. In other words, these indicators embed the variable you are trying to forecast. 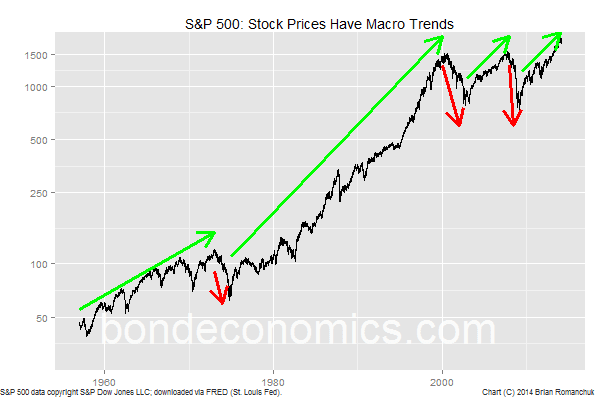 The chart above illustrates one problem with the use of equities in an indicator. Equities probably can be viewed as some sort of random walk over short time intervals (e.g., daily data), but exhibit macro trending behaviour on longer time frames (for example, if you use monthly data). Those trends will then show up in a LEI that uses stock prices, and you end up with a disguised “technical analysis” indicator. (Technical Analysis is the use of historical prices and volumes to forecast future asset price moves. The advantages of Technical Analysis over fundamental analysis are it can be applied to any asset, and that once you learn the patterns, you do not have to think very much. The downside is that if markets are even slightly “efficient”, technical analysis will not be profitable.)

Another problem is that stocks should be priced based on expected earnings, not aggregate economic activity. What we have seen in this cycle is booming profits despite fairly tepid growth (since the wage share of income has collapsed). As a result, the stock market has heavily outperformed economic growth this cycle. Therefore, the apparent breakdown of equities as a leading indicator is not a sign that the stock market is irrational; rather the embedded assumption that the profit share of national income is stable was wrong.

Turning back to the Philadelphia Leading Index, it faces the potential problem that the yield curve may be “broken” as the result of zero short rates. The slope between short rates and the 10-year bond yield often inverts ahead of a recession. But unless the bond bulls get really ahead of themselves, that is not going to happen until the Fed hikes rates with gusto. As a result, the readings of the LEI will be biased upwards in the current environment. (This breakdown of the yield curve as an indicator in a zero policy rate environment was obvious a long time ago for anyone who covered the Japanese economy.) Returning the Philadelphia Fed index, this may be an explanation of why it is still relatively high, but I will stress that I have not looked at this possibility in detail. (I would have to replicate the index methodology to see what is happening.)


This article by John Jansen of "Across The Curve" discusses the Citigroup Surprise Index. This index is a measure of how much recently released economic data is surprising the economic consensus (as based on surveys). As noted there, the Surprise index is negative, indicating data has recently been coming out below consensus.

These indicators are relatively new (in addition to the one produced by Citigroup, I believe other investment banks produce their own versions). Unfortunately, I do not have access to them, so I cannot comment too much on their details.

These indicators should theoretically be the best type of index for market participants. Under the assumption that market prices incorporate the consensus view, deviations from consensus is what should be driving asset price changes.

However, surprise indicators are not supposed to convey information about the economy (but it may be possible that they could be useful to adjust a model in practice). Theoretically, if economists slashed their growth forecasts quickly enough, there might be no negative economic surprises when the data are released, even if the economy falls into a recession (that was not previously expected).

Additionally, the recent run of data has been distorted by the systematic forecast errors created by economists not taking into account how seasonal adjustment algorithms operate. Most discussions of economic data revolve around the seasonally-adjusted versions of the data (myself included; adding in non-seasonally adjusted data sets is not a priority item for me). The collapse in activity due to the financial crisis was unusually violent, and it was big enough to affect seasonal adjustments.

A seasonal adjustment algorithm averages the behaviour of a series across several years. The crisis was big enough so that the average looked like a small financial crisis was supposed to occur at the same time every year. Since the seasonal adjustments are constrained to average out over the year, this implies that a recovery must occur in the remaining part of the year. Since those crisis were avoided, the data has been alternatively overshooting or undershooting that expected pattern, causing a big ripple in the seasonally adjusted data. (The algorithm cannot fix the pattern for all time, as seasonal patterns do drift as the economy evolves. Additionally, manual corrections cannot be used, as that introduces too much human judgement into the production of data. If there are conspiracies to manipulate government data, they cannot do things that would be easily picked up by fixed income analysts.)

The end result has been highly seasonal forecast errors after the financial crisis. This situation was only widely diagnosed in the last year or two, just when the effect is fading out. With that problem out of the way, it will now be easier to tell how useful these surprise indicators are.


At present, I would lean towards using the Chicago Fed National Activity Index as a summary indicator for the economy. It is giving a signal of deceleration; but we have seen other such wiggles during this expansion.