Mysticism about money is damaging to economic theory. This shows up in even the most fundamental questions, such as defining what “money” really is. It is clear that the developed countries are “monetary societies,” and behaviour is very different from those societies where money is either not used or highly ceremonial in nature. Unfortunately, our usage of the word money is often muddled, as we say things like “she made a lot of money selling used cars,” even though what we really mean is that “she earned a high income selling used cars.” For those with an interest in describing macroeconomic behaviour, such vagueness is not enough; we have to pin down what we mean by money.

If money were to be abolished from economic theory, the only references to money might be in reference to the monetary aggregates. This primer explains the definitions of these aggregates (without diving into the institutional differences between different regions).

(Note: this article is an unedited excerpt from the upcoming Abolish Money (From Economics)!) 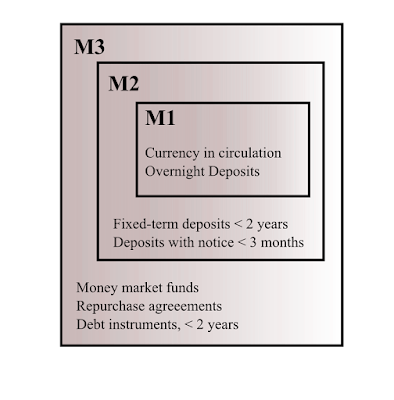 
The definition of the monetary base (“M0”) is not given by the ECB, but for Canadian data, the definition is “notes and coin in circulation, chartered bank and other Canadian Payments Association members' deposits with the Bank of Canada” (from CANSIM table 176-0025).

The Canadian definition of the monetary base is similar to that for the United States, but there is a key practical difference. In Canada, banks are not required to hold deposits at the central bank (the Bank of Canada), while in the United States, banks are required to hold reserves at the Federal Reserve banks. This means that the definition in the United States would be modified to include “required reserves and excess reserves” (excess reserves are deposits at the central bank in excess of reserve requirements, which are based on the size of bank’s deposit base).

The only reason to care about monetary aggregates is that we can relate them to other economic variables. By themselves, they are only of interest to accountants (“how many currency notes did we print, anyway?”).

The Quantity Theory of Money in its simplest form argues that we can directly relate the price level in the economy to the money supply. However, the simplest version of the theory (in which increases in the money supply create proportional increases in the price level) can be rejected by the empirical data, using any of the monetary aggregates to stand in for the vaguely defined “money supply.” However, it is possible to conceive of more complicated relationships between monetary aggregates and the price level, in which increases of money translate into inflation “in the long run.” Monetarism was an influential body of economic thought which tried to find such relationships.

Attempts to validate such a relationship explains why there are so many monetary aggregates. Since existing aggregates failed to have predictive powers, new aggregates were developed, which were supposed to cover up the defects of the existing aggregates by adding in new “monetary” instruments. However, these new aggregates also generally failed to be useful as well. As a result, the attractiveness of Monetarism collapsed (although a few rebranded “Market Monetarists” remain), and most analysts pay little attention to the monetary aggregates. The empirical relationships are discussed in “Instability of Money Velocity” and “Should We Care About Money Growth?” (Note: These have not been previously published; early versions of the analysis appear here and here.)

Discussions of “money” within macroeconomics are often detached from reality. We need to define a monetary aggregate that we wish to analyse, and then attempt to see whether it provides any useful information about economic behaviour. In general, we find that the information provided is extremely limited, which explains why monetary aggregates are now rarely discussed in market analysis.