Primer: When Does The Quantity Theory Of Money Make Sense?

In this post, I give a quick overview of the Quantity Theory of Money, and I look at the empirical evidence in post-World War II North America. A weak form of the theory can be arrived at in a number of ways, and one could argue that it holds "in the long run". But as my empirical evidence shows, the "long run" may be far too long to be of any use for analysis. I tend to ignore the theory for this reason, which appears to be a consensus view amongst fixed income analysts.

The Strong Version Of The Quantity Theory Of Money


The equation of exchange is a formula which acts as the definition of the velocity of money. There are a number of forms of writing the equation, and I will use:

Note that since this defines "velocity", it always holds.

What I refer to as the "Strong Version Of The Quantity Theory Of Money" is that velocity in the above equation is a constant value, V.

The implications of this theory are straightforward and powerful. For example, a rapid doubling the "money supply" (I discuss the issue of which monetary aggregate to use below) implies that nominal GDP will double over that period. Since it is unlikely that real production can react quickly to a change in the money supply, the bulk of the adjustment would be in the form of price changes, hence the price level would roughly double.

I will immediately note that no respectable living economist believes in the Quantity Theory of Money in this strong form. Earlier economists may have written down theories that were equivalent to this version, but they were operating in an era where macroeconomic data were either unavailable or even not even conceptualised yet. The real debate is over a weaker version of the theory, as I discuss below. However, this simple version allows us to see what the point of the quantity theory is - it provides a mechanism to explain inflation.

Weaker Versions Of The Quantity Theory


Quantity theory exists in a weaker form, in which the velocity of money is not constant, rather it is a function of other economic variables. The idea is that the velocity will mean revert to a long run value, and so the strong relationship between money and nominal GDP will hold "in the long run". This idea has a long history, and I do not wish to discuss it here; I will refer the reader to the Wikipedia entry for more details.

I will instead run through reasons why velocity may be stable in the long run.


Although these arguments are hard to refute theoretically, the empirical usefulness of these observations is limited, as seen in the next sections. 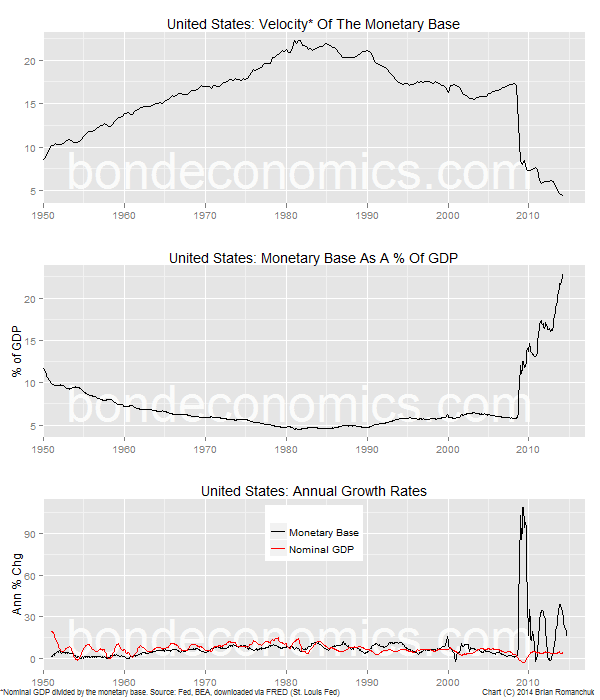 Although the U.S. Federal Reserve's Quantitative Easing did nothing useful for the economy, it was helpful in putting a stake through the heart of the Quantity Theory Of Money.

The chart above shows the relationship between the (adjusted) monetary base - which includes deposits at the central bank, as well as notes and coins - and nominal GDP. During the period 1950-2007, velocity ranged from less than 10 to more than 20. This means that the strong version of the quantity theory of money would yield predictions of nominal GDP that are off by 100%, which is a fairly lousy performance.

More recently, a foolish hyper-activity by the Fed after the financial crisis led to the monetary base exploding in size, and velocity collapsing. There has been no impact on nominal GDP growth, which is mired at a steady state annual growth rate of about 4%.

One of the problems with the Quantity Theory of Money is that it is unclear what monetary aggregate to use. Within simplistic DSGE models, in which banks do not appear, money is a well-defined concept, and corresponds to the monetary base. But in the real world, we need to take into account bank lending, particularly if you are a believer in the "debt-based growth" explanation of the quantity theory. As a result, we can define the velocity in terms of a broader monetary aggregate. 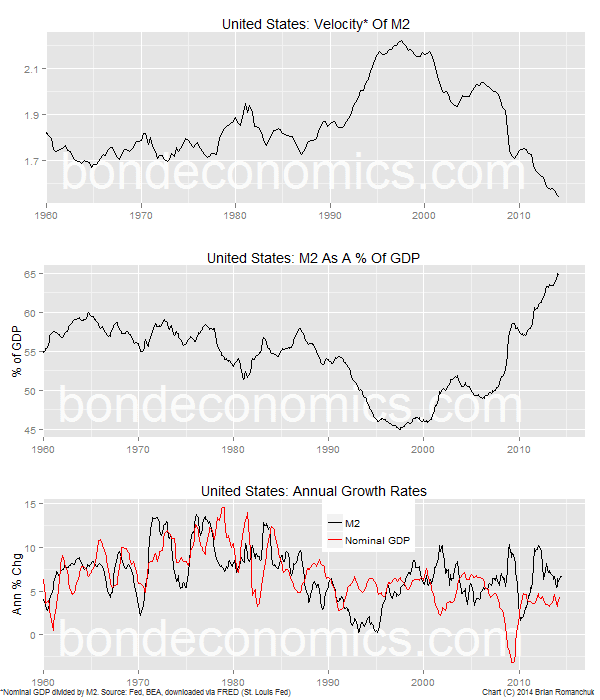 Once we move to a broader monetary aggregate - M2 in this case - velocity is more stable. However, when we look at the bottom panel of the chart, there is still very little relationship between M2 growth rates and the growth rate of nominal GDP. 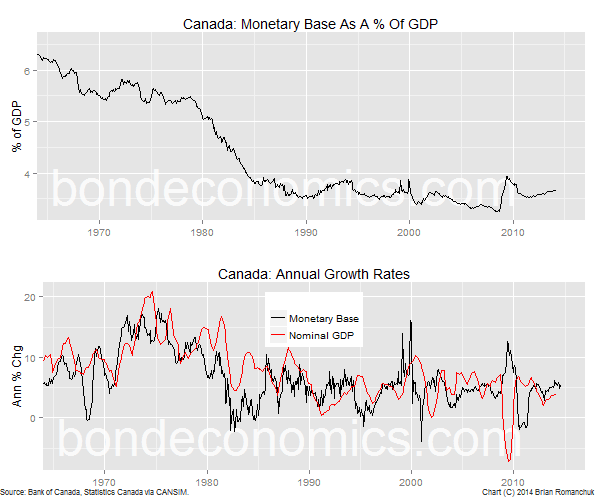 The Canadian experience is similar to that of the United States, but there are two divergences. Firstly, the Bank of Canada did not get caught up in the Quantitative Easing insanity that infected other central banks. This keeps the series spiralling out of control at the end of the data set. Secondly, Canada abolished regulatory reserve requirements within the banking system. As a result, the monetary base has shrunken relative to nominal GDP. (Since velocity is just the inverse of the percentage of GDP of money, I dropped the velocity panel from the charts as being redundant.) 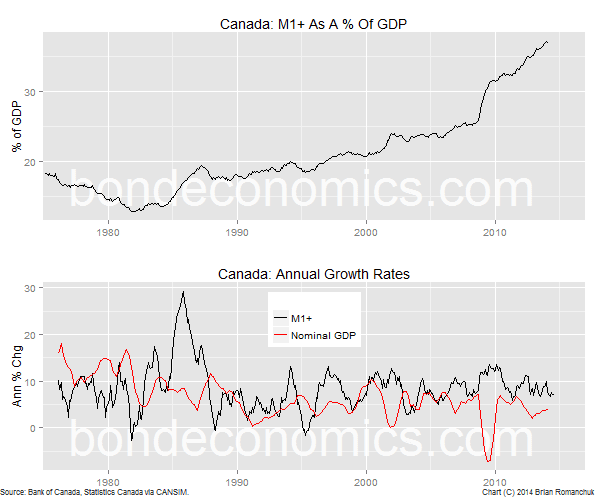 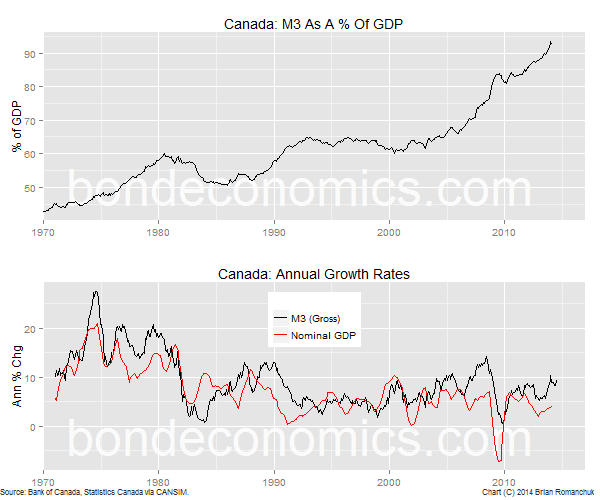 The two charts above show wider Canadian monetary aggregates: M1+ and M3 (gross). Both have been rising faster than nominal GDP since the mid-1980s. The recent spurt of growth non-coincidently arose when the Canadian housing market has entered a rather spectacular debt-fuelled bubble.

This latter factor probably explains why we cannot use the Quantity Theory of Money on reasonable forecast horizons - 3 to 5 years, say. Money is not just used to support transactions in the real economy, it is also used to support transactions in assets, notably real estate assets. Since buying and selling houses do not directly add to GDP (other than various fees), a spectacular wedge can arise between debt/money growth and GDP growth.

Although the Quantity Theory of Money may hold in simple economic models, velocity is too unstable for it to be useful for estimating inflation or nominal GDP on any reasonable forecast horizon. Even if velocity mean reverts on a very long horizon (20-30 years, for example), we have no way of forecasting money growth on such a horizon.