Effects Of Tax Cuts In A Simple SFC Model 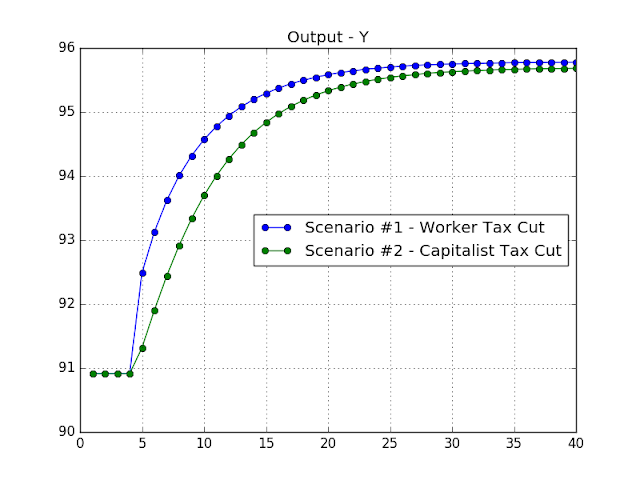 I will discuss the details further below, but I will now briefly summarise what is happening in the simulation.
As can be seen in the above chart, GDP converges towards roughly the same steady state level in both scenarios. (The fact that scenario #1 has a slightly higher level might be an artefact of rounding assumptions, and is not viewed as meaningful). However, in the short run, Scenario #1 exhibits a more rapid growth of GDP.

Although this example is not an attempt to be a serious model of a real world economy, it does illustrate why Keynesian economists would view tax cuts aimed at the richer segments of the population will be less effective for generating growth in the short term. (This property relies on the belief that workers will have a higher propensity to consume than capitalists.)


Supply Side Versus Demand Side

It must be immediately noted that free market-oriented "supply side" economists would object to these results. The counter-argument is that by aiming tax cuts at businesses, it would induce additional investment, and boost long-term growth rates (since the capacity of the supply side is presumably increased by increased investment).

This ends up being a very ideological debate that I do not expect to resolve. However, I would note that the model that I am looking at makes such a determination impossible. The model is extremely simple, and it is entirely demand-driven: there are no supply side constraints within it whatsoever. (As tax rates tend to zero, output tends to infinity.) Therefore, within the context of this model pursuing the debate makes no sense; we need to look at a model with capital accumulation. Therefore, the discussion here is not meant to be interpreted as policy advice.

That disclaimer aside, I think the results are roughly reflective of real world behaviour; in the short-term, we need to look at the effect of fiscal policy from a demand-driven perspective.

The means by which I adjusted the model SIM is non-standard, but I think it is easier to understand than the alternative. I broke the household sector into two sub-sectors, one whose income is entirely wages, and the other that is entirely dividends. Each sub-sector has its own consumption function parameters, as well as facing a different tax rate. (The tax rate is a flat average tax; no attempt is made to account for the progressive nature of tax brackets.)

The usual way of modelling the household sector would be to lump the two sub-sectors into a single mass. My concern with this is that we probably need to differentiate the income streams in order to get a more realistic model, which means that we are effectively breaking up the household sector within the equations anyway.

Within Model SIM, there was effectively one state variable -- the household sector's holdings of government liabilities. Within this augmented model, there are now two state variables -- the financial asset holdings of the two sub-sectors of the household sector. (If the two sub-sectors had the same propensities to consume ("alphas"), we would not be able to distinguish this model from model SIM.)

The Python source code that generates the model is in the appendix. (The code relies up my sfc_models package; this article describes the installation process. As a technical note, the code below uses features that are only in the development branch of the package at the time of writing. Unless you are working with the development version, which is directly updated from GitHub, you will need to wait for the release version of the package to catch up to the new features.)

The initial steady state has the following characteristics (all numbers are rounded).

The scenarios are generated by reducing the tax rate for a sector so that its taxes paid is $1 less, assuming an unchanged pretax income. (Since the tax cut stimulates growth, the pretax income rises above the original steady state, and so actual taxes paid in the next time period drops by less than $1.)
Since the profit share was assumed to be fixed at 20%, the aggregate worker pretax income is 4 times the pretax value of dividends. Correspondingly, the tax cut for dividends has to be much larger in order to generate the same $1 in tax cuts.

Although the models I have so far developed are quite simple, they allow us to understand some of the underlying dynamics that will show up in more complex models. The current example shows why Keynesian economists emphasise the differentials in the propensity to consume by different classes of households.


The code to generate the scenarios is given by: