Is High Money Growth Telling Us Anything? 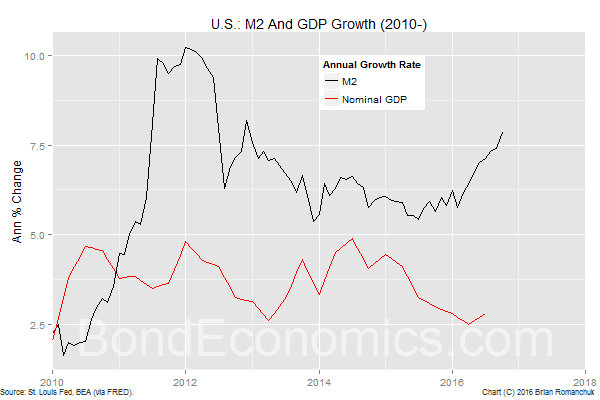 Although money supply growth has dropped off the radar of most analysts, I occasionally see references to it. Given the sentimental attachment to the Quantity Theory of Money that still exists, a figure like the one above may raise eyebrows. With the annual growth rate of M2 in the United States near 8%, is that a signal that nominal GDP growth is about to accelerate?

(As a technical note, I am using the seasonally adjusted monthly M2 series calculated by the St. Louis Federal Reserve in the charts in this article. I produced the charts as part of finishing up "Abolish Money (From Economics)".)

My best guess is that the correlation will hold, and that nominal GDP will rebound from its sub-4% pace. However, that is just based on mean reversion in growth, and that the money growth figures are not adding a lot of information to that call. The reason for my skepticism is found in the historical record. 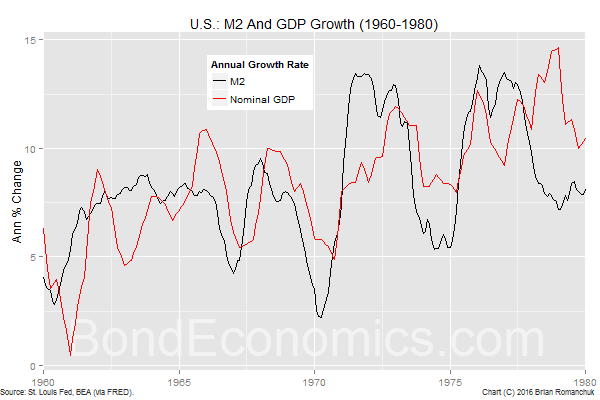 If we look at the data period which validated the belief in Monetarism -- I use 1960-1980 as a rough sample period -- the correlation between the growth rates in the money supply and nominal GDP was strong. During that era, it was a good bet to use money supply growth to infer the direction of economic acceleration. (The velocity of money was not constant -- although it was relatively stable during that era -- so we still would need to be cautious about forecasting the level of growth rates based on money growth.) 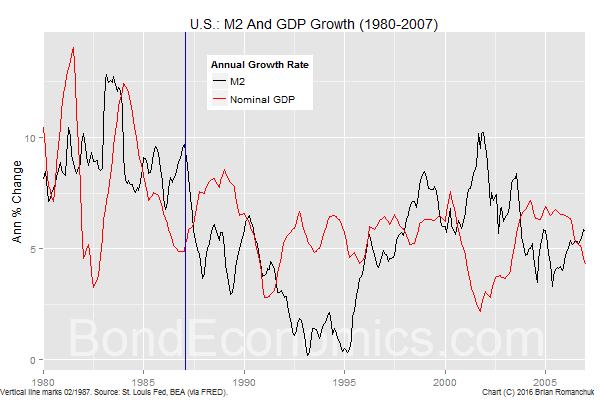 However, the usefulness of money growth as an economic indicator faded by the mid-1980s. For example, the trends completely diverged in 1987 (as indicated by the vertical line), Furthermore, M2 growth essentially stopped dead during the expansion of the early 1990s, as well as during the expansion of the mid-2000s. (A period that commentators such as John Taylor argue was a period of excessively loose monetary policy.)

One possible response to such an analysis is the argument that the money supply needs to be adjusted to take into account various special factors. Unfortunately, that appears to be an analytical dead end: if we keep "correcting" almost any series, it can always explain historical data. Unless we have a way of knowing how to make such adjustments in real time, we do not have a useful forecasting indicator.

Instead of relying on such magical indicators, the best way forward is to focus on the fundamentals driving growth. This mainly revolves around forecasting the prospects for fixed investment, although a hefty loosening of fiscal policy would also change the outlook. I do not have a strong opinion about the strength of fiscal policy (although I expect some loosening as a result of tax cuts), while I do not see strong reasons for fixed investment to accelerate strongly in either direction. As a result, "muddling through" still looks like a reasonable base case.