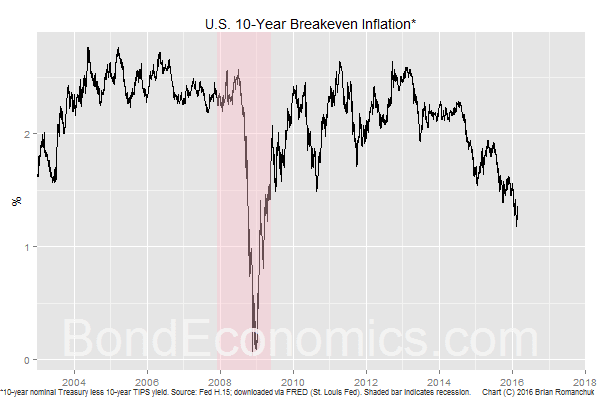 The ongoing collapse in breakeven inflation (roughly speaking, what rate of inflation is priced into the bond market -- primer) is not a particularly optimistic sign about the global economy. However, this does not necessarily reflect a belief that a recession is imminent. The fall reflects the weakness in oil prices, and probably is also related to the directionality of the inflation-linked bond market (TIPS in the United States). This article explains this notion of directionality.


The U.S. TIPS market has been only in existence for a short period of time, and the publicly available data series is even shorter -- only starting in 2003. Since there was only one full cycle during that time (unless the U.S. economy has entered recession), it is difficult to discuss how interest rate cycles relate to breakeven inflation with that data. Instead, we will switch to the Canadian data -- for 30-year Real Return Bonds. For these bonds, we have a data set (from the Bank of Canada) stretching back to 1995, which gives us a bit longer track record to look at. The U.S. TIPS market moved in a similar fashion to the Canadian market if you look at its pre-2003 history (if you have access to the data).

The United Kingdom was one of the earliest modern issuers of inflation-linked debt ("linkers"), with issuance starting in the early 1980s. Unfortunately, the design of U.K. inflation-linked gilts was extremely complex, and the market data hard to deal with. The Bank of England publishes yield curve data; I may look at it in the future. 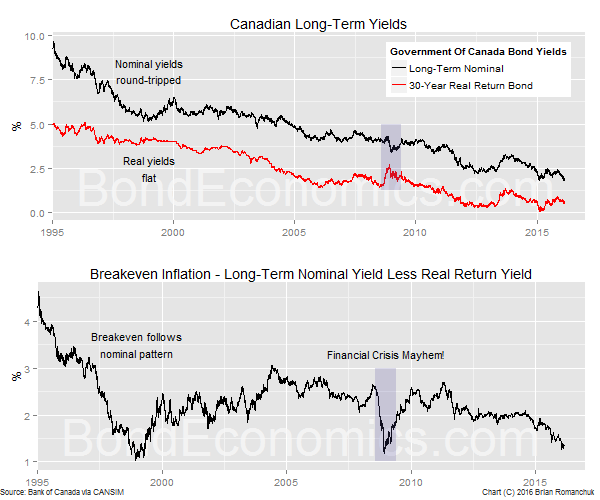 The chart shows the last two decades of the secular bond bull market in Canada. The top panel shows the nominal yield (yield on a conventional bond), and the "real yield" -- the quoted yield on Real Return Bonds. (Indexed yield is probably a better term for this rather than real yield, but most people call it the real yield, and I will follow that convention here.)

(As a technical note, I am using a "Long-Term Bond Yield" instead of a 30-year benchmark yield for the nominal rate due to data availability issues. I doubt that this would make anything other than a cosmetic difference in the results.)

The experience during the LTCM crisis in 1998 illustrates the directionality effect. As highlighted on the chart, the nominal bond yield fell as that financial crisis took hold, and then reversed higher once it was clear that the U.S. economy was largely going to be unscathed. (The Asian economies had been levelled earlier, and so the U.S. was somewhat decoupled from global conditions.) The technology boom was still under way, and yields rose as the job market tightened and investment boomed.

However, the Real Return yield was largely unchanged during this episode. (The market was not exactly liquid, so perhaps all of the market makers were too busy day-trading internet stocks to change prices.)  As a result, the breakeven inflation rate fell than rose, following the pattern of nominal yields (as noted on the chart). 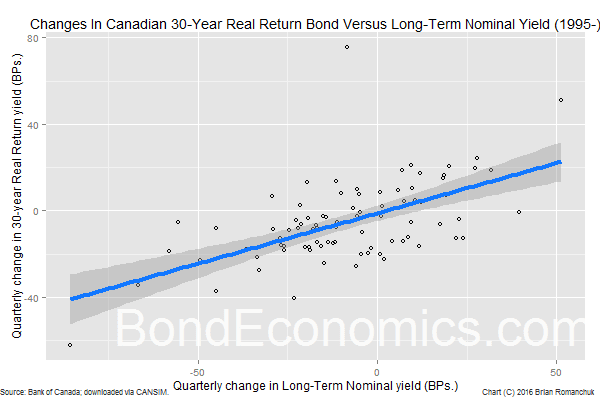 Obviously, the scatter plot is somewhat of a cloud of points, which understates the effectiveness of the relationship. Most of the time, yields are stuck in trading ranges, and so we can end up with the two markets somewhat uncorrelated. However, if we isolate large movements in yields -- bond bull or bear markets -- we see that real yields fairly consistently move by less than nominal yields during those periods. In other words, you can trade between the markets based on your view of the big underlying trend in yields. 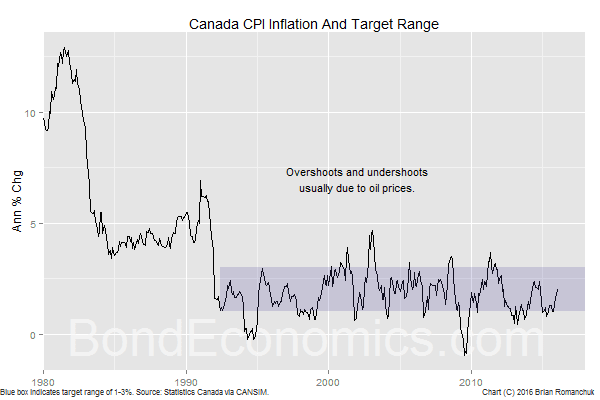 However, there are limits to how far this directionality will work. Breakeven inflation cannot move too far from expectations, and in the modern era, those expectations have not strayed too far from the central bank's target. The chart above shows the Canadian experience, which is a poster child for inflation targeting. The shaded bar indicates the 1-3% range for inflation, and the line indicates headline inflation. (Inflation-linked bonds pay off based on headline inflation, which includes food and energy. Economists often prefer to look at core, which excludes those components.) Other than brief misses -- generally due to energy price movements -- inflation has been within the target band. This helped anchor 30-year breakeven inflation expectations in the 2-3% range over most of the period after the year 2000.

This anchoring implies that breakevens will drift within a trading range near the central bank inflation target (assuming that the target remains credible); the directionality effect explains whether the breakeven will be near the top or the bottom of the trading range.

As stated earlier, this pattern of behaviour has generally held across the developed countries. The chart below shows the scatter diagram for yield changes for 10-year U.S. bonds over the 2003-2015 period. The regression coefficient is slightly higher, with a sensitivity of 0.53. Once again, this is close to the rule of thumb that real yields move half as much as nominal yields. 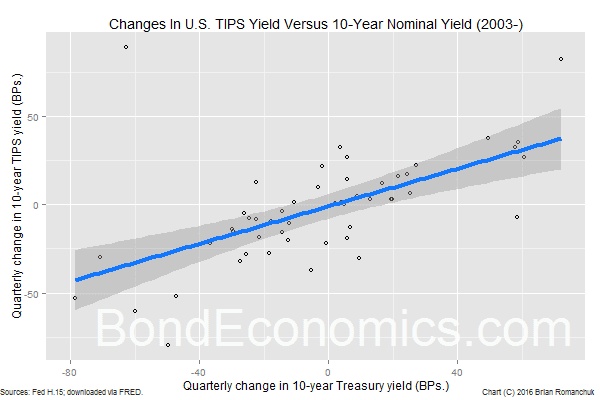 This is a large subject. I am largely dismissive of how risk premia are being calculated by various research groups, but I recognise that there are times when they matter. If you return to my earlier chart of Canadian breakeven inflation, you will note the highlighted area labelled "Financial Crisis Mayhem!" During the 2008 Financial Crisis, nominal yields fell and real yields rose, causing a fairly spectacular plunge in breakeven inflation.

It must be remembered that oil prices did crater after spiking to $150/barrel; but the effect of that deflation is not going to be too significant for 30-year annualised inflation. (Short-term breakevens were legitimately under pressure.) Additionally, the disarray in the financial markets did hit economic confidence, but probably not by as much as the fall in breakevens imply.

The explanation for the move had nothing to do with efficient markets: there were a lot of trading desks stuck in levered positions in index-linked bonds across the developed world. Everybody knew that they had to get out, and nobody who had the capacity to buy was willing to do those other players any favours by paying reasonable prices for index-linked bonds.

None of this has anything to do with stories about "inflation risk premia"; this was just a period when the markets were completely disorderly, and instruments were not priced anywhere near fair value. Very simply, I see no way of modelling such behaviour -- how can a mathematical model pinpoint an utterly nonsensical price?

Note: This is the first draft of a section that appeared in the report: Interest Rate Cycles: An Introduction.