One of the non-intuitive aspects of the analysis of inflation-linked bonds (also known as index-linked bonds, or even linkers) – is that their “real yield”* is almost a point of trivia for their valuation. Linker valuation is best understood by looking at their implied breakeven inflation rate.


(Note: I defined the breakeven inflation rate in this primer.)

This is very different than the situation for standard ("nominal”) bonds of a wide variety of types (corporates, asset-backed, govvies, etc.). For these bonds, the payments are legally fixed in dollar terms (although they may reference floating-rate benchmarks, such as LIBOR). For such bonds, and even fixed income derivatives, it is possible to define the carry (running yield less cost of funding) over time periods. A good deal of fixed income trader-focussed trade recommendations fixate on the 6-month or 3-month carry of the position.

For inflation-linked bonds, looking at the carry is highly questionable. This is because of the seasonality of the inflation index, as well as the erratic nature of inflation (in particular, energy prices).

In the chart below, I look at the yield over 6 months for the Effective Fed Funds Rate (which is a reasonable risk-free short-term benchmark, although repo rates may be preferable). In nominal terms, the yield is (roughly) equal to the 6-month moving average. As we see in the top panel, the yield is a smooth function over time, reflecting the fact that the Fed pegs that interest rate. 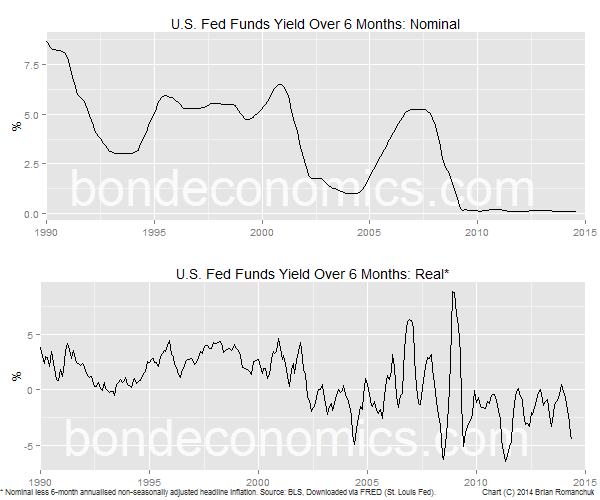 The bottom panel of the chart shows the yield when expressed in real terms – it swings up and down wildly. Since we are annualising the rate of interest, the changes in the inflation index are magnified. The real yield would be even more erratic if I chose a shorter calculation horizon.

The significance of this is that all financial instruments are priced to have an expected return that is equal to the risk-free rate (plus risk premia). Therefore, if there were short-term inflation-linked Treasury Bills, arbitrage considerations would force their quoted yield to match the trajectory shown in the bottom panel.

(NOTE: I have simplified the calculations in order to make it easier for a reader to replicate my results. My calculation ignores the lag in the bond indexation calculations, as well as the different quote conventions. All those complications do is shift the time series slightly, and create miniscule corrections to the figures.)


The decomposition of nominal bond yields into expected inflation and real yields by Irving Fisher has cast a long shadow over how economists view bond valuation. Unfortunately, it creates a bias towards dubious analysis. It is often assumed that real yields matter, and that these real yields are constant. This thinking reaches its apex in the Real Business Cycle models (a sub-category of Dynamic Stochastic General Equilibrium models) which are models of the economy whose bedrock assumption is that the price level in the economy continuously adjusts to result in a constant real yield. (The chart above shows that this assumption stinks.)

My impression is that this bias leads to commentators paying too much attention to the real yields on index-linked bonds. However, there is no valuation anchor for the real yield curve – the real yield can take relatively arbitrary values over the short run. At the time of writing, I would argue that we could say that the probability of the nominal short rate 6 months from now being less than -3%, or greater than 3%, is pretty close to 0.  But, based on the analysis above, it would be hard to rule out such a swing in the six-month real yield.

And over the long run, there is little sign that real yields are constant – even though central bank reaction functions are biased to act that way. In particular, real yields have been negative for several years now, and there is no sign of the economy accelerating. The chart below shows the real yields based on a 24-month calculation window. (I used 24 months instead of the more common annual inflation in order to smooth out energy price spikes.) 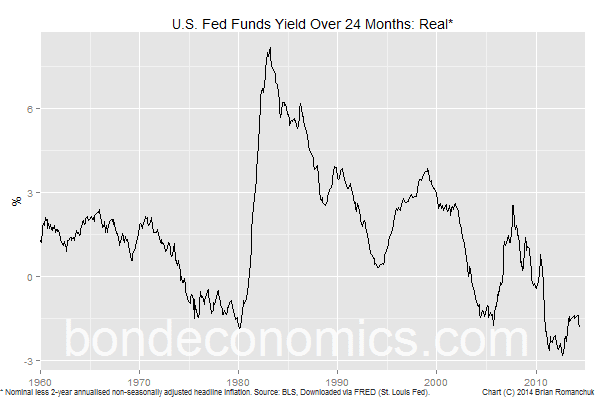 Breakevens Are The Valuation Anchor


The breakeven inflation rate acts as the valuation anchor for inflation-linked bonds. It is possible to buy and sell linkers versus nominal bonds, and book profits if realised inflation differs from the breakeven inflation rate in the manner that you forecast (assuming you can hold to maturity). For a long-dated bond, it is difficult to hold to maturity, but it is feasible for short-dated bonds. (However, in Canada, where there are only 30-year index-linked bonds issued, nobody has yet had the chance to hold any of them to maturity.) This creates a valuation method at the front of the curve, and then forecasts of forward inflation can be used to value longer-dated bonds.

This is analogous to the situation for corporate bonds. We cannot really judge whether a particular yield level for a corporate bond is reasonable, but we can judge whether its spread compensates for the expected default risk (as well as illiquidity premia, which are a major component of highly-rated corporate spreads).


There is a potential exception to my view, which is the case of ultra-long (e.g., 30-year maturity) index-linked bonds. Nobody can hope to forecast inflation over a 30-year horizon, so one could easily doubt the value of inflation expectations over such a long horizon. And there are investors who are targeting long-term returns relative to inflation (e.g., pension funds with inflation-indexed payouts to retirees). As a result, it seems possible that real yields could matter for such bonds.

Furthermore, we do see some deviations from pricing on a spread basis in corporate bonds. High yield (below investment grade rating) corporate bonds seem to trade on a yield basis, not a spread basis. This is possible because the investor base for high yield debt is distinct than that for investment grade corporates, and those investors have an absolute return perspective. Since there is a distinct investor base interested in long-dated linkers, it is possible that their pricing could also diverge from what is implied by the nominal government bond curve.


Although it appears that there are three yield curves one can trade – nominal, real, and breakeven inflation – in practice there are only two with useful valuation anchors. The third curve – the real yield curve – is just the residual between the other two curves. Analytical frameworks need to take this into account.

* The use of “real yield” for the quoted yield of an index-linked bond is inconsistent with how real yields have been typically defined by economics – the current nominal yield less spot (or expected) inflation. There is a good argument to use “indexed yield” instead of “real yield” (or even “own yield”), but that usage is not very common. I use the more common “real yield” to reduce confusion.