Primer: What Is Breakeven Inflation? 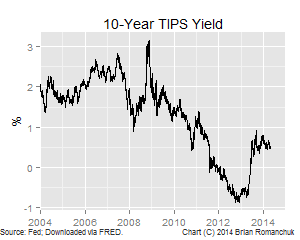 The breakeven inflation rate is a market-based measure of expected inflation. It is the difference between the yield of a nominal bond and an inflation-linked bond of the same maturity.

Since investors' money is on the line, they presumably have an interest in pricing inflation correctly. It is viewed as a more reliable measure of inflation expectations than those measured by surveys. In this article, I explain how this concept is used in bond market economic analysis.

I will illustrate my discussion with data from the U.S. inflation-linked bond market (known as the TIPS market, where TIPS stands for Treasury Inflation Protection Securities). Inflation-linked bonds are also known as index-linked bonds, or even "linkers". Other sovereigns have issued similar bonds, and they mainly have a similar structure.

The original (modern)* index-linked bonds were issued by the United Kingdom, and they thus have the longest run of available data (since the early 1980s). The problem with the U.K. market was that the design of the index linking was such that analysing them is very difficult, and the pricing rules of thumb I discuss here do not apply to those bonds. (At one point when I wanted to look at the pricing formulae for those bonds, even the U.K. Treasury was unwilling to print out the full calculation formula in one of their guides since the formula was such a mess.) Canada introduced a cleaner design for index-linked bonds in the early 1990s, and the "Canadian Model" was followed by most other sovereigns that started issuing index-linked bonds (including U.S. TIPS). 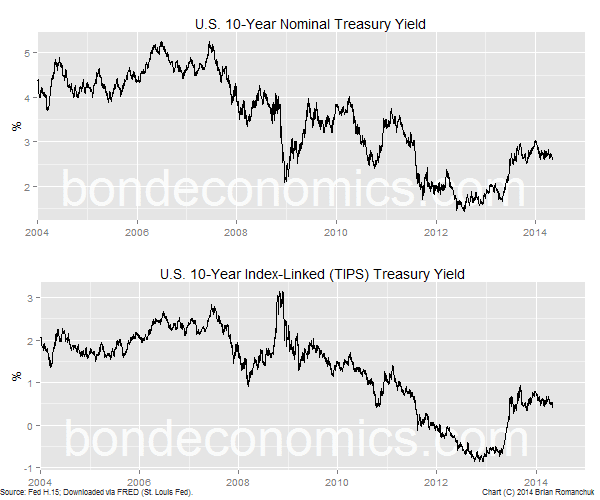 For readers who are unfamiliar with index-linked bonds, the primer: "Understanding Inflation-Linked Bonds" gives an introduction to how the bond design gives investors a total return that is protected from inflation. This section is a summary of the points in that article.

Inflation-linked bonds are bonds whose cash flows are indexed by a consumer price index; in the case of the United States, it is the non-seasonally adjusted CPI. In the Canadian model, the price and yields of the bonds are calculated in "real terms" - you can think of it as constant dollars, or even a bond in another currency, where the "exchange rate" is the CPI index.**

Inflation-linked bonds therefore allow you to create retirement cash flows that are indexed to inflation.

(Technical note: For TIPS (but not all other markets), there is an added guarantee that you will get your money back if you buy it when first auctioned. Even if there is deflation over the lifetime of the bond, the principal payment will always be at least $100. Note that if you buy the bond in the secondary market for more than $100, you can lose money on the principal.)

The chart above shows the yields of generic 10-year U.S. government bonds. Since having your cash flows indexed to inflation is valuable, the quoted yield on TIPS are generally less than on regular ("nominal") Treasurys. Most people refer to the yield on TIPS as being the "real yield", although that conflicts with the definition of real yield that is often used in economics (which was developed before inflation-linked bonds existed). 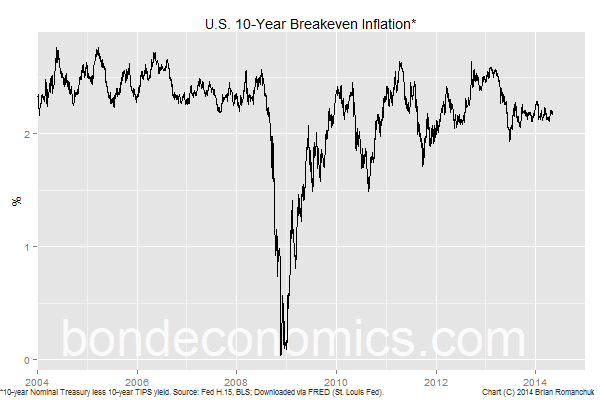 The chart above shows the 10-year breakeven inflation rate, which is defined as:

It is called the breakeven inflation rate because you would (roughly) receive the same total return on TIPS as you would a nominal Treasury if CPI inflation averages that level over the next 10 years. Note that this estimate break-even rate will be slightly off for bonds trading away from par, and does not take into account things like the difference in financing costs. The true economic breakeven will be even further from this spread for shorter maturity bonds, for reasons I discuss further below.

As an aside for those of you who write about the markets. The breakeven is a spread between bonds, but the convention is to quote it as a percentage, and not in basis points. This is because you typically compare the breakeven to the level of inflation, which is an outright percentage.

Breakeven Is A Hold-To-Maturity Concept

This is the same as other fixed income valuation measures like yields or spreads. They are expressed on a hold-to-maturity basis, but there is no guarantee that returns over shorter periods will match the hold-to-maturity average.


The relationship between breakeven inflation and expected inflation is murky. There are a number of factors that can cause breakeven inflation to be biased relative to "true" expectations. (Note that I am ignoring the relatively small pricing errors from using the breakeven spread calculation. Under normal circumstances for long-dated bonds, the approximation is usually within 10 basis points of the true economic breakeven.)

During the crisis, the TIPS market broke down. I would argue that although the 10-year breakeven inflation rate dropped to about 0% at the end of 2008, no major market participants expected no inflation over the following 10 years. Rather the situation was that very few investors had the capacity to buy them, and everybody knew that there was a lot of forced selling to come. Therefore, there is no point trying to line up the breakeven inflation rate with inflation surveys at that point in time. 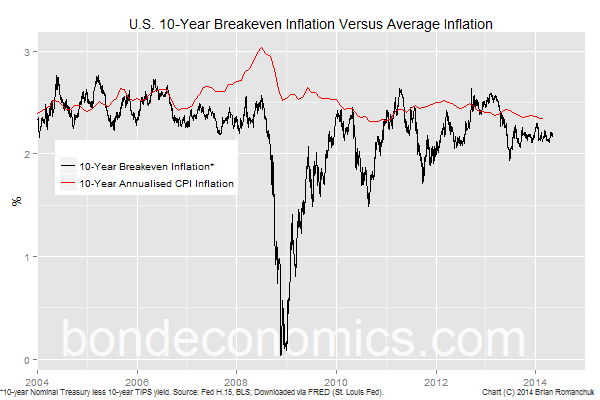 The TIPS market came into existence during an era of inflation stability. Although the Fed does not have an official inflation target, it has been acting since the early 1990s as it has one. As the chart above shows, 10-year annualised CPI inflation rate has been steady at just above 2% for most of the last decade. Since headline CPI is used, the spike in gasoline prices in 2008 managed to get the 10-year average inflation rate to 3% temporarily.

What we also see is that breakeven inflation has also stuck close to historical average inflation. Although one has to keep in mind that backwards-looking measures of inflation were a disaster in the 1970s, the experience of the past two decades was that inflation has stuck near 2-2.5% despite some wild swings in the economic cycle. (Note that the CPI has an upward bias relative to the Personal Consumption Expenditure price deflator, which is the Fed's preferred inflation measure. Thus when people talk about the Fed wanting "inflation" to be 2%, that implies that CPI inflation is above 2%, as shown above.) 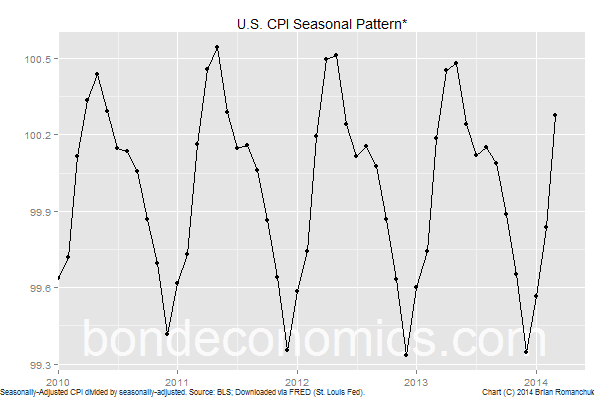 One of the nuisances of pricing TIPS is that they are based on non-seasonally adjusted CPI. For calculations involving fitted bonds with an exact number of years to maturity (such as I do above), seasonality does not matter. But for actual bonds in the market, most of the time there is a non-integer number of years to maturity. This means that the time of year in which you buy does not match the time of year of the maturity.

The chart above shows the seasonal pattern in the CPI index. It is calculated by dividing the non-seasonally adjusted CPI by the seasonally adjusted version (and multiplying by 100). The seasonality factor dips down to about 99.3, and reaches 100.5. That is a difference of 1.2%, or 120 basis points. Although this does not sound like a lot, this change is compressed into a period of 4-5 months. This creates an annualised rate of change of a few hundred basis points. For short-dated bonds, this factor can have a large impact on the true economic breakeven between TIPS and nominal bonds. As a result, you can get some extremely weird-looking yields on short-dated TIPS, even though there are no unusual factors in inflation.

As a result, the use of the breakeven spread as a proxy for the true economic breakeven for short-dated bonds is not recommended. (This topic is further discussed in this article on inflation-linked carry.)


If you are a retail investor who invests in Exchange-Traded Funds, and you want to know how to judge whether an inflation-linked bond ETF will outperform a nominal bond ETF, all I can say is - good luck. Even if I had access to all the relevant pricing information (which I no longer do), I would despair at trying to calculate the true economic breakeven. ETF's represent baskets of bonds, and it is hard to maturity match between them. Moreover, the constituents change continuously, so you would need to make assumptions about how the bonds are rolled over.

About all you can do is look at the indicative breakeven inflation rate at a few benchmark maturities, and use that to make a judgement call on overall relative valuations.