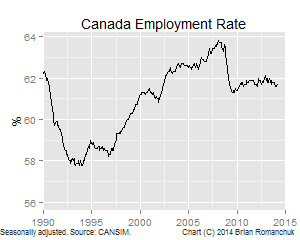 This is just a quick note related to the labour markets in Canada, the United States and Australia. The Canadian Labour Force Survey was strong in March, similar to the U.S. Household data. However, the housing market hangs over the Canadian economy. Australian labour data were weak in March, remaining on a sluggish trend.

The March Canadian Labour Force Survey was strong, although it is noisy from month-to-month (like the U.S. Household Survey, which has a similar methodology). This volatility means that we cannot conclude very much from one strong month, other than the run of weaker data has ended. The unemployment rate nudged down 0.1% to 6.9%, and the employment rate* rose 0.1% to 61.7% (chart above). 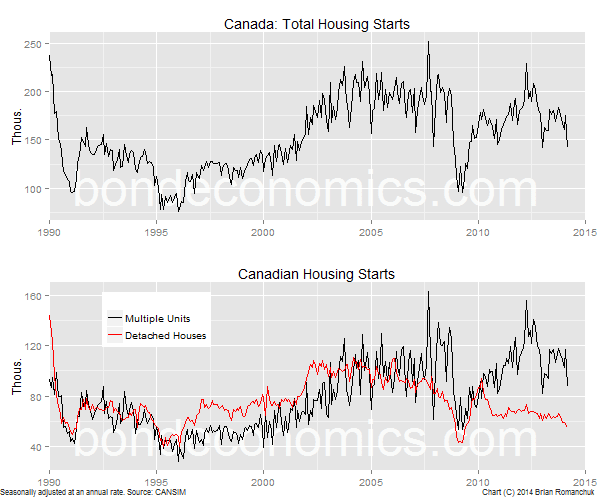 The risk to the Canadian economy is the construction sector, and the latest data (also for March) were dismal. Canada was more frozen than usual this winter, and so it is unclear whether this was just a weather-related blip. However, the trend does look fairly ominous. I am not concerned about house prices on the basis of nebulous concepts like the wealth effect, rather my worry involves the employment impact of the unwinding of the bubble in construction. Detached housing (single units) has been weak for some time, which is a positive from the supply/demand viewpoint. That said, there appears to be a glut of unsold condos, and more coming in the pipeline. Since projects that have started are being finished, it will take time for any weakness in starts to feed through into employment.

There is an interesting article on the Macro Blog (Fed Reserve Bank of Atlanta): Reasons for the Decline in Prime-Age Labor Force Participation (by Melinda Pitts, John Robertson and Ellyn Terry). (Note: "prime age" is the 25-54 year old age cohort.) There's a lot of graphs and discussion. My concern with much of the discussion around this topic is the assumption that the drop in the participation rate reflects real factors such as ageing, and not the weakness job market. They write:


As chart 2 makes evident, the vast majority of the rise in prime-age nonparticipation since 2009 is due to the increase in those saying they do not currently want a job. The largest contributors to the increase are individuals who say they are too ill or disabled to work or who are in school or training (see the orange and blues lines in chart 5).

Those who say they don't want a job because they are disabled have a relatively low propensity to subsequently (re)enter the labor force. So if the trend of rising disability persists [my emphasis], it will put further downward pressure on prime-age participation. Those who say they don't currently want a job because they are in school or training have a much greater likelihood of (re)entering the labor force, although this tendency has declined slightly since 2007 (see chart 6).

It seems somewhat suspect that people have been increasingly unwell just as the labour market started softening around the mid-2000s. But it could reflect an increased weighting towards older members within the 25-54 year old cohort over time. In any event, the rise of people in school or training almost certainly reflects the weak job market.

Going further afield, the Australian labour force data were weak. Bill Mitchell covers the data in detail on his blog.


Today’s release of the – Labour Force data – for March 2014 by the Australian Bureau of Statistics tells us that last month’s data, which depicted a strengthening labour market was an aberration. Today’s data brings us back to the stagnant situation that we have been witnessing for the last few years. Employment growth weak and barely keeping pace with the underlying population growth and the participation rate falling. Many commentators are expressing surprise that the unemployment fell by 29.9 thousand but a close examination of the impact of the decline in participation shows that all of that unemployment fall is due to the participation effect. There is nothing good in it at all. Further, full-time employment declined sharply further emphasising the on-going weakness. It remains that employment growth has been around zero for nearly two years and there is an upward bias in unemployment.

The Australian data are also choppy month-to-month, but the jobs market there appears stagnant. Australia is in a similar position to Canada: an over-extended housing market, and a labour market lacking the momentum to make a dent in underemployment.

Finally, technology stocks have been rolling over. Although it is clear that some market participants are over-extended (what else is new?), it is unclear whether this reflects anything other than the excessive valuations in that sector. In the meantime, relations between Russia and NATO are souring. The situation does not look particularly positive for Ukraine**, but my assumption is the western powers will remain outside any conflict (outside of token sanctions). It appears the bond markets will be following those signals in the near term.

* The official name for the employment/population ratio in Canada was changed to the employment rate.
** It was news to me, but the "the" was dropped from "the Ukraine" in English usage after its independence.