This month’s Employment Report may be a victim of the government shutdown (the data have already been gathered, so it is possible that the report could be released). Unfortunately, it is the best source of information on the labour market, which is critical for the Fed outlook. Inflation is quiescent, so the only justification for Fed tightening in the near term will be a tightening labour market. The weekly Initial Jobless Claims may continue to be produced (as the data is processed by the States). These data paint a fairly positive picture of the labour market situation; however this reflects limitations of the data.

One limitation of the Initial Jobless Claims data is that it only tells us about one side of the labour market (separations), and not the other side – hiring. A further limitation is that people who voluntarily quit employment are generally not eligible for unemployment insurance, and so it only provides a partial picture of the separation side of the labour market. The chart below illustrates how these limitations make these data less useful at this point of the cycle. 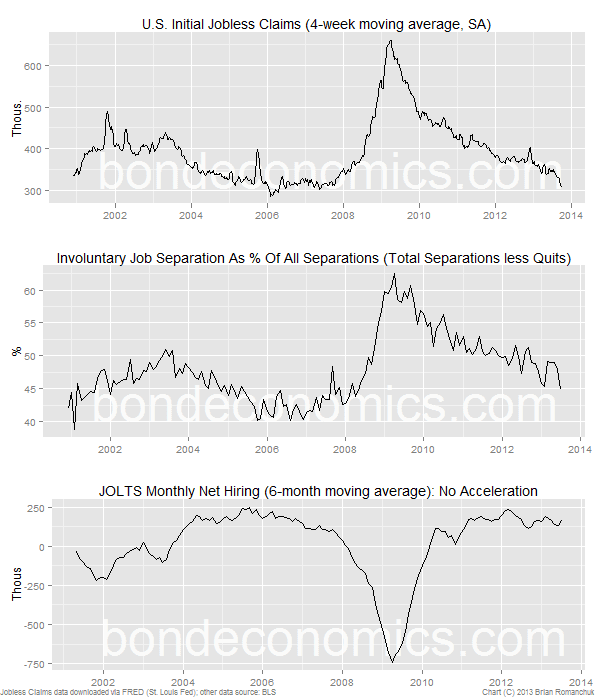 In the top panel, we see the 4-week moving average of Initial Jobless Claims, which are marching steadily lower. However, this is explained by the second panel: the percentage of involuntary job-leavers has also been decreasing since the end of the recession. (This data is from the JOLTS survey of the Bureau of Labor Statistics, which starts in 2000. I define "involuntary" separations as Total Separations less Quits.) In other words, the number of people eligible for unemployment insurance has been reduced as headcount reductions have been increasingly achieved via people quitting.

The reduction of involuntary job losses has not meant that job growth is accelerating. The third panel of the chart shows the net monthly job creation according to the JOLTS data has been averaging around 150-200 thousand per month since the end of the recession – similar to the Establishment Survey numbers (Nonfarm Payrolls). Although positive job growth is welcome, it has not been enough to greatly increase the percentage of the total population that is employed (the Employment Ratio). Investors and policymakers need the more comprehensive data from the Employment Report to judge the amount of slack in the labour market.

(This post was triggered by this post on jobless claims from a few weeks ago by Warren Mosler.)

In conclusion: an upward spike in Initial Jobless Claims data is a very useful indicator for confirming that the economy is heading into recession. However, once corporations have finished their downsizing exercises, the initial jobless claims head lower without giving us much information about the vigour of net hiring or the tightness of the labour market. Investors who use Initial Claims for directional signals for the Treasury market need to take into account these two regimes of operation.