Education As An Automatic Stabiliser 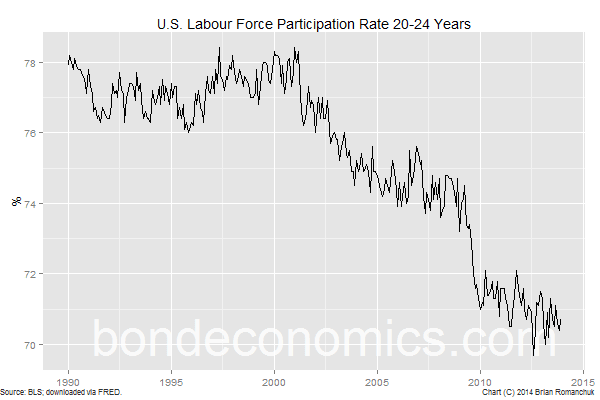 The fall in the Labor Force Participation Rate (LFPR) is possibly the most important analytical conundrum in this economic cycle. The falling LFPR explains how it is possible that that percentage of the population that is employed (the Employment Ratio) is not rising, while at the same time the Unemployment Rate is dropping like a rock. The subject is complicated because the LFPR is not steady over time (e.g., women entered the labour force), and varies across age cohorts. I cannot cover the whole subject in this article, rather I will look at one piece of the puzzle – the role of education in the fall of the LFPR.

There has been a lot of research published on the fall of the LFPR, but I have not found anything that I view as definitive. In fact, the two most compelling articles I have seen (both by Fed researchers) are contradictory. Although I am happy to give the pros and cons for arguments regarding nebulous topic such as whether interest rates will rise or fall this year, it seems awkward to present two papers which directly contradict each other on a narrow technical question. Once I have looked at the data in more detail, I will comment further.

Participation Rate For The Younger Cohorts


The chart at the beginning of this post shows the LFPR for the 20-24 year old civilian population in the U.S. from 1990-present. (I zoom in on this period as I am not interested in the earlier structural changes.) We see that it has fallen after the recession, and has not really recovered. Looking at these data tells me that the U.S. labour market is in an abnormal state, even if I do not have a numeric estimate of the magnitude of the problem for the aggregate labour force.

The “micro” mechanism for an increasing number of students is easily understood. When I finished my undergraduate degree in engineering, everyone applied for a number of jobs as well as grad schools. At that time (1991), the electrical engineering job market was weak, and so a number of people ended up not taking a job like they planned, but they went to grad school as a backup. I assume students are as smart now as we were then, and that quite a few have ended up in various educational institutions (including vocational training). The rising amount of student debt outstanding seems to validate this assumption.


Now, let’s imagine a very small country with nice stable demographics, and we want to track the labour market status of university graduates.  During the “normal” period, 100 students graduate every year, and 20 go on to a 3-year post-graduate programme (in which we assume everyone completes in the 3 years, which is unlike any postgrad programme I had contract with). Therefore, the labour market has to absorb 100 people every year; 80 direct from undergrad, and 20 graduating from grad school.


Then, a slowdown hits the economy, and there are only 90 jobs for new graduates. This can be accommodated by having 10 extra students opting out of the job market and going to grad school.  The job market only needs to absorb 70 undergrads, and the 20 graduates of grad school. But the participation rate for the overall population we are tracking is lower, as there are more students (30 in the first-year instead of 20).

We assume that the next thing happens again, for the next two years.

The next year is where things are different. The size of the graduating class for the grad school is now 30. The job market once again has to absorb 100 graduating students (70 from undergrad, 30 from grad school) in order to avoid unemployment. Hiring would have to be even faster to return the grad school class size to a “normal” size of 20.

What happened is that the grad school acted as a buffer for students who would have been unemployed. But what happens is that buffer has a finite lifetime before those students return to the labour force. So unless the size of people entering education continues to increase, employment growth that is below population growth will eventually lead to higher unemployment.


Historically, the U.S. job market was dynamic, and had not suffered such a prolonged spell of job destruction as seen in this cycle. This meant that people who started education programmes when the economy was weak re-emerged when the economy has had jobs ready for them. What is probably happening now is that those graduates are re-emerging with the job market still in a weak state.

Since people who have just graduated are likely to undertake a job search, the odds are that they will not drop out of the labour force if they cannot immediately find a job. They thus start to put a floor under the LFPR (at least for this younger cohort).

The conclusions I draw from this thought experiment:

Thoughts On Education As An Automatic Stabiliser


Although not normally counted as such, it seems clear to me that education acts as an automatic stabiliser in modern economies. The students are still consuming goods and services (as marketers of RESP’s remind us Canadians…), but do not provide outputs that are sold in the market. This means that they are in a deficit position, injecting cash flow into other entities in the economy. This deficit spending is financed either via running down personal savings, or by borrowing. (To what extent the students do paid work cancels out this net stimulus.) This helps reduce the shock of a recession to the labour market as well as smoothing aggregate demand.

Education acts in a similar fashion to buffer stock employment, known as the Job Guarantee that is advocated by Modern Monetary Theory. However, in this case the government provides money in the form of a loan, instead of wages. Additionally, students are removed from the labour force for the length of the course, which lasts from a few months to a great many years for some doctoral students.

Education certainly appears to be a win-win-win solution for those who can be helped by it:


However, there is little point in forcing people to train for jobs that do not in fact exist. As such, education should be a voluntary automatic stabiliser. Society still needs to have other programmes to better utilise the talents of those who have been excluded from a job, such as the Job Guarantee advocated by Modern Monetary Theory.