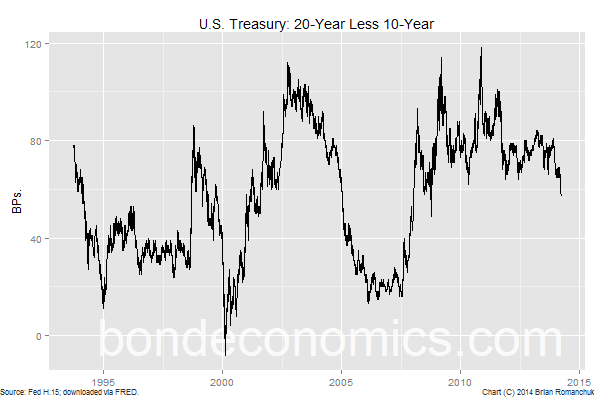 The Treasury yield curve has decisively flattened in response to Yellen's comments as well as other developments. The markets are now settling in and focussing on the prospect of rate hikes starting in mid-2015. In this article, I outline the parameters that drive the Treasury market outlook.

There are four questions that matter:

Question 1 - No Hikes? The answer for the first question is critical; if the Fed does not start hiking rates, the other questions do not apply. Although recent economic weakness is being blamed on the weather, the previous surge in the Chicago Fed National Activity Indicator (shown below) looks similar to previous surges that excited the hawks. (The National Activity Indicator is a summary indicator based on a large number of indicators, designed to give an overall summary of U.S. economic activity.) The possibility remains that people who dropped out of the U.S. labour market will return, such as students who entered university programmes when they could not find employment. Since there are less people to drop out of long-term unemployment, the participation rate could finally stabilise. The implication is that the unemployment rate would stagnate, as happened in Canada, another slow growth North American economy. This could take rate hikes off of the table, even if a recession is avoided. 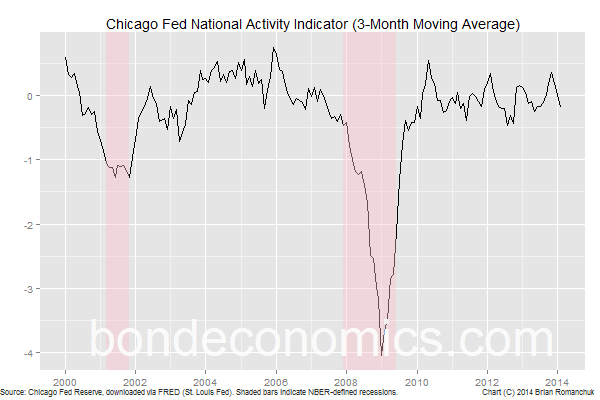 Otherwise, the answers to the questions 2-4 will determine the trajectory of the policy rate (Fed Funds rate).

Question 2- Timing? It seems unlikely that rate hikes would occur before 2015; the Fed will be content to let Quantitative Easing wind down, and the mortgage market adjust to the expected upward bump in mortgage rates. As such, hikes would be not much earlier than the six month period after the end of QE, as suggested by Janet Yellen. Alternatively, the Fed is unlikely to want to wait too long before hiking rates; the economic cycle is already old, and they are unlikely to want to head into a recession with the policy rate at zero. As a result, an interval of a few months around mid-2015 seems to cover the most likely outcomes.

Question 3 - Pace? As for the pace of hikes, the default assumption should be 25 basis points per meeting, based on previous cycles. Hikes every second meeting would be possible if there is no sign that the economy is accelerating, and inflation is stuck below 2%. Hikes at a such a slow pace would make it extremely likely that the policy rate would be very low heading into the next recession. 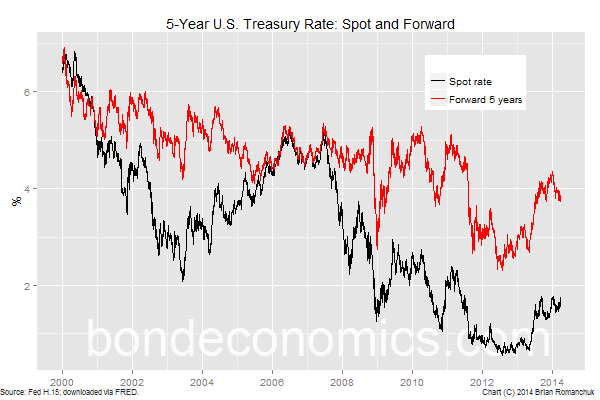 Question 4 - Terminal Rate? Finally, the terminal rate is of importance for the pricing of long-dated forward rates. My approximation of the 5-year rate, 5-years forward is near 4%, which is a reasonable guess for a terminal Fed Funds rate. At 25 basis points per meeting, that level would be hit two years after rate hikes start - mid-2017 on a default timing assumption. Since it is highly possible that the economy could fall into recession by then, it seems that it will be difficult to dislodge that forward rate to a higher level. The implication is that if the forward rate is stuck, but shorter maturity rates rise in line with Fed rate hikes, the curve will relentlessly grind flatter.

At the long end of the curve, the 10-/20-year slope, it has already flattened significantly (chart at top the article). (I used the 20-year yield for the long maturity as the 30-year history was disturbed by the period when 30-year auctions were stopped.) The absolutely low level of interest rates should tend to keep the long end steeper, on the basis that people will expect "mean reversion" in rates on long-term horizons. Additionally, long-term yields are far below actuarial return targets, limiting the demand for long-dated paper. This will make further flattening more difficult to sustain on that part of the curve.

The implication of these developments is that 10-year Treasury may already have done a good job of pricing the rate hike cycle; there could be a sell off from here, but less dramatic than last year's sell off. It will take about two years time to see whether yields are too low relative the realised terminal rate. As a result, the 10-year yield may be much more resilient than many non-fixed income specialists may expect.

There have been many attempts to price the 10-year yield using variants of regression models; using Fed Funds as an explanatory variable. Since the Fed Funds rate and the 10-year yield tend to move in parallel over long histories, the model coefficient will often be close to 1. This generates the belief that a rise in the Fed Funds rate will have a major effect on the 10-year yield. Looking the forwards tells us the impact could be relatively muted. In my view, this forward behaviour explains the "conundrum" of the mid-2000's cycle - why bond yields did not rise in tandem with Fed Funds. In other words, it was not the result of indiscriminate bond buying by central banks, which was a popular explanation at the time. Since forwards were sensibly priced, there was no conundrum to explain.