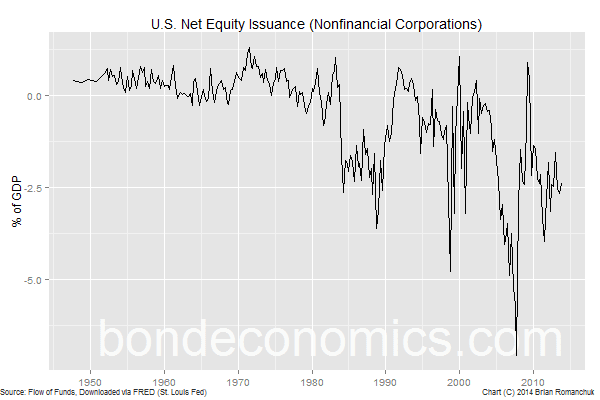 In the United States, corporations now have the tendency to return profits to shareholders via stock buybacks. The explanation that is usually given is that this is for tax efficiency. However, in this article I show that this complicates the valuation of equities. Once the expectation is that money is returned via stock buybacks, there is no way of valuing the equity of the firm without referencing the market price at which it is bought back. If management destroys value with the buybacks, the fair value of the stock is lower. Additionally, it is necessary to incorporate the stock holder’s strategy into the valuation exercise – stockholders need to sell when management is buying back shares. This ambiguity of pricing reinforces Keynes’ argument that equity pricing is a form of beauty contest – but the judges that matter the most are in corporate management.

The chart above shows the net amount of money raised via issuing equities on the part of nonfinancial corporations in the United States (according to the Flow of Funds) – it is heavily negative in recent decades. This negative value is the result of the fact that corporations are buying back stock, and taking part in cash takeovers. (An all-stock deal would result in zero net issuance of equities.) Corporate behaviour is different than it was in the 1960’s; the stock market is no longer a source of funds for capitalism. It is now a place where corporate cash disappears.


To start, we will value the equity of a corporation that pays dividends. It has 1 million shares outstanding. For simplicity, we assume that the discount rate is 0% (which sadly close to recent interest rates). We assume that:

It is left as an exercise to the reader to determine that the expected value of the dividend payouts is $2 per share. (I.e., the probability-weighted average of total payouts possible is $2 per share.) We would say that $2 is the fair value of a share using a dividend discount model, and that the fair value market capitalisation of the firm is $2 million. (Once again, remember that the discount rate is 0%; the expected present value would be lower if we discounted with a positive interest rate.)

Additionally, since the description of the cash flows is time invariant, the fair value will always be $2/share if we repeat the valuation exercise at a future year under the condition that the corporation still exists.


We now look at what happens if the dividend payment is replaced with share buybacks. Instead of paying cash to shareholders, the company wades into the market and buys back shares. What is the fair value of the company’s shares now?

The only answer that appears to internally consistent to me is:
The strategy appears attractive from a tax standpoint; the stock price is rising, and so any shareholder profits will be in the form of capital gains.

What Happens If The Buybacks Occur At Different Prices?


I cannot come up with a convincing fair value model if management buys back at a different price than the trajectory I give above. For example, if they pay too much (a very real possibility), less than half of the shares are retired in the buyback. The people who sell get an excess profit, and the people who hold their shares lose value.

In the real world with uncertainty, buybacks away from fair value obviously happens. However, such a possibility appears internally inconsistent within an asset price model. A fair value model typically assumes that investors should be indifferent between buying and selling at the fair price. An internally consistent model would tell you that if management pays too much, you sell, and the analysis stops there.


What I find most puzzling about this example is what happens to a buy-and-hold investor that starts with a relatively small holding.

In the case of dividend payments, the expected value of the cash flows is $2 for a buy-and-hold investor (i.e., the fair value calculated above).

In the case of the buybacks, it is almost certain (i.e., with probability 1) that the buy-and-hold investor will be wiped out at some point. The expected value of the cash flows is $0. The company is worthless to such an investor.

Obviously, once an investor owns more than half of the shares outstanding, that investor has to participate in the buybacks if they occur at the fair value trajectory. But if the investor starts with a small holding, it is unlikely that the investor would end up in that position.

It appears to me that in order to value the stock, you need to incorporate the selling strategy of the investor. The most consistent strategy is that all investors sell their stakes proportionally to the buyback. If we ignore tax consequences, this ends up being equivalent to a dividend payment. Any deviation from this strategy will create winners and losers amongst equity holders.

Note that although my mortality statistics are high, this is not a special case. Since every company is just one too-aggressive CEO away from bankruptcy, every company is ultimately doomed. If you never sell your equities, the cash spent on buybacks is worthless to you.


In addition to the tax advantages of stock buybacks, supporters point out that dividends are old school. What matters is total return. Since a great deal of equities are held in the form of funds that reinvest dividends on behalf of investors, the money would have just been plowed back into equities anyway.

However, buybacks represent forced reinvestment into the participating corporations. On a portfolio basis, it is a forced reinvestment towards a particular type of corporation – corporations that heavily buy back their shares. If share buybacks are a mark of companies with poor prospects, this is a suboptimal reinvestment rule. Additionally, if you refer back to the chart at the top of this article, it appears that net issuance of equities is cyclical – shares were being retired before and after the recent crisis, when stock prices were at their highest. I do not have the data that distinguishes buybacks from takeovers, but my understanding is that buyback timing has been destroying value in aggregate.

Once we realise that we have to incorporate the market timing acumen of management into the valuation of a stock, we come to the conclusion that equity valuation is inherently circular. For a minority shareholder, fair value is what someone else is willing to pay for it – Keynes’ beauty contest.

Rather than looking at the corporate valuation from the standpoint of a minority shareholder – which is what security discounted cash flow represents – we have to look at the value of the firm as a business. And in particular, what is the value of control of the firm to an acquirer. Suddenly, some of the weirder metrics used in valuation of technology companies make more sense – value per engineer, etc.

Although this sounds more sophisticated and business-savvy, it is just as circular in the current environment. In general, it is the same corporate managements that buy back their own shares who also buy out other companies. And it is unclear whether they are interested in valuing the shares they purchase properly. They are incentivised to push stock prices higher, courtesy of stock-linked compensation. And if they overpay? At the end of the day, it’s not their money, it’s the shareholders’.

It appears that we are back where Keynes’ left us – it’s just a question of animal spirits. But, in the current environment, it’s the spirits in the C-suite offices that really matter.