Links: NAIRU and The Money Multiplier 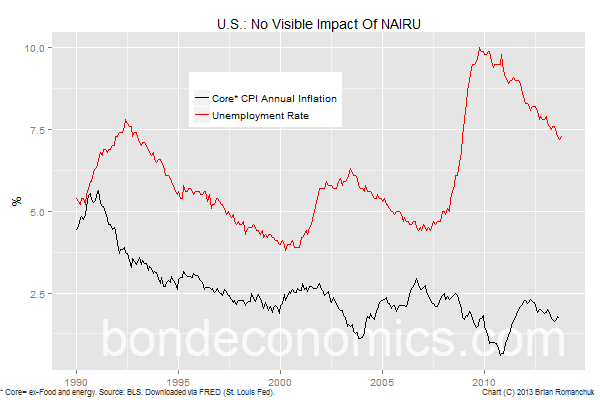 In "Why we have to learn about NAIRU (and reject it)", Bill Mitchell discusses the theoretical problems with NAIRU. NAIRU is the Non-Accelerating Inflation Rate of Unemployment, which replaced the "natural rate of unemployment", which was empirically rejected. Professor Mitchell actually posts a video that demonstrates how the estimated NAIRU is just a smoothed version of unemployment. In other words, it is almost the same thing as taking an exponential moving average of the unemployment rate (as known as "adaptive expectations"). (Bodies that calculate the NAIRU, like the OECD, probably use a more complicated filter, but the result ends up being roughly the same.)

As my chart above shows, there does not appear to be a level for the unemployment rate for which:

Email ThisBlogThis!Share to TwitterShare to FacebookShare to Pinterest
Labels: Inflation, Money, Stuff I Read On The Internet