Some comments on discussion of interest rates at zero elsewhere...


First, the FOMC Minutes show that policymakers are still trying to convince everyone that rates will be at zero for a long time.

At the conclusion of the discussion, the Committee decided to continue adding policy accommodation by purchasing additional MBS at a pace of $40 billion per month and longer-term Treasury securities at a pace of $45 billion per month and to maintain its existing reinvestment policies. In addition, the Committee reaffirmed its intention to keep the target federal funds rate at 0 to 1/4 percent and retained its forward guidance that it anticipates that this exceptionally low range for the federal funds rate will be appropriate at least as long as the unemployment rate remains above 6-1/2 percent, inflation between one and two years ahead is projected to be no more than a half percentage point above the Committee's 2 percent longer-run goal, and longer-term inflation expectations continue to be well anchored

However, this is to keep everyone's mind off of "tapering". It seems clear that tapering will push up rate expectations, at least initially. The Fed has not really offered clear guidance on how to measure the slack in the labour market yet, and so there is no good reason to believe their forward guidance. That said, it may be that Yellen will have a more clear message when she moves to head the FOMC. As such, I find the current outlook fairly difficult to read.

Secondly, in "Is zero the new normal?", Simon Wren-Lewis discusses the debate whether rates will remain at zero for a long time due to the "natural real rate" (NRR) being depressed for a number of reasons:
(He defines the "natural real rate" as the real rate of interest that keeps inflation constant.) I generally agree with his logic, although I will note that he has made the standard assumption that interest rates are effective for controlling inflation, a point that has been debated.

However, I am unconvinced by a point he raised at the end of his article.

If we look at the United States post-World War II, government debt ratios were "high" at two points: just after World War II, and now. (The same roughly holds for other countries in a similar situation after World War II - Canada, U.K., Australia.) During these periods, realised real rates of interest were low, and this did not cause inflation to rise. During the high-inflation period of the 1970's to the early 1980's, real rates started out too low, and then increased. But at that time, the government debt/GDP ratios was quite low, as nominal GDP growth grew the denominator of the ratio. 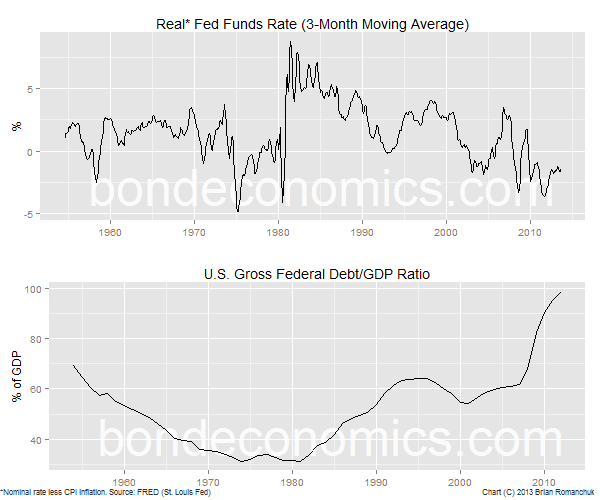 As a result, I am unsure that the data bear out his assertion that increasing government debt levels raises the natural real rate. (Note that since I view government bonds as a reserve drain, I disagree with the idea that "too much saving goes into buying government debt", but one could argue that the NRR is raised as the result of other effects.)

Email ThisBlogThis!Share to TwitterShare to FacebookShare to Pinterest
Labels: Central Banks, Stuff I Read On The Internet