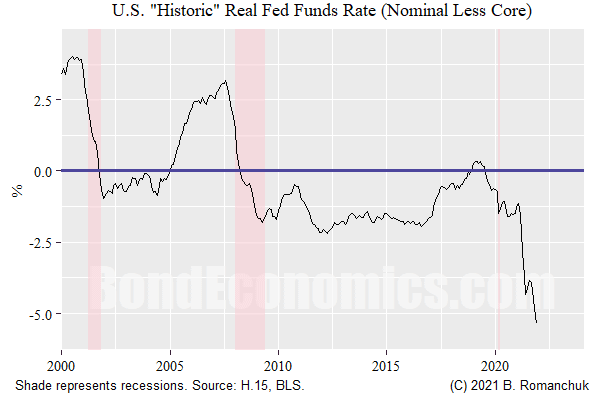 (Note: This article was delayed because of technical difficulties. I finally found a work around.)

Although hand-wringing about Quantitative Easing and the “transitory-ness” of inflation is catching most people’s attentions, there is an interesting theoretical concern that is about to get quite pressing. That is: what is up with r* (which is the modernised version of the “natural rate of interest,” although the word “natural” was finally dropped from the jargon). Although post-Keynesians generally argue that r* does not exist — so this is a non-issue — neoclassicals cannot easily embrace that position.

From what I have seen, various estimation techniques for the not-directly-measurable variables loved by neoclassical theory blew sky high during the pandemic, and I have not paid any attention to whether the techniques have since been patched. My assumption is that this is a major topic of interest for researchers, but I doubt that there will be a consensus fix this quickly.

I wrote about the problems with the Holsten-Laubach-Williams (HLW) estimation technique in this earlier article. The New York Fed website — which previously published the estimate — suspended updates when the pandemic data hit. The chart below what happened to the r* estimate based on the initial data in 2020. I have not updated the chart to include more recent data. As noted in my earlier text, one of the problems with the pandemic data is that it was so extreme that the previous estimates of r* were also mangled, since the fit was much worse than was the case for data ending in 2019. 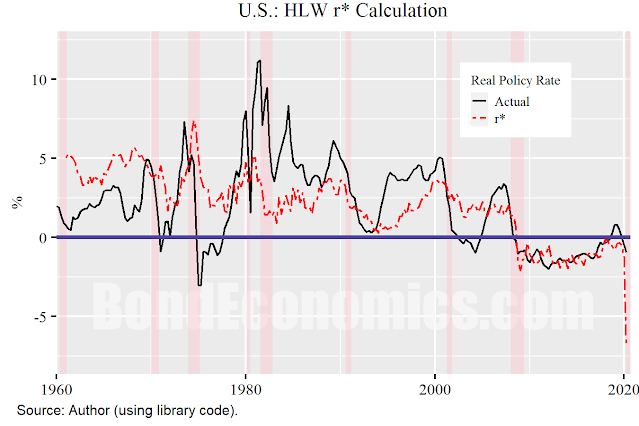 Even if we do not know what neoclassicals think r* is supposed to be, we can what the real policy rate. Or at least we sort-of can, given that it is unclear what rate of inflation we are supposed to use to get the real rate.

The figure at the top of this article shows what I label as the “historic” real rate: the spot Fed Funds (I use the midpoint of the band) less core CPI. It started off with the same sort of mildly negative values we saw in the past cycle, then went deeply negative in 2021. Since it is hard to see the dates associated with the last plunge, the real policy rate started 2021 at around -1%, then first went below -4% in June (ending at -5.4% in December).

The problem with using the “historic” real rate (although it is common in analysis) is that we are comparing a forward-looking interest rate versus the past year’s percentage change in the CPI. In neoclassical models, the variables of interest are the policy rate, and the next period expected inflation rate. 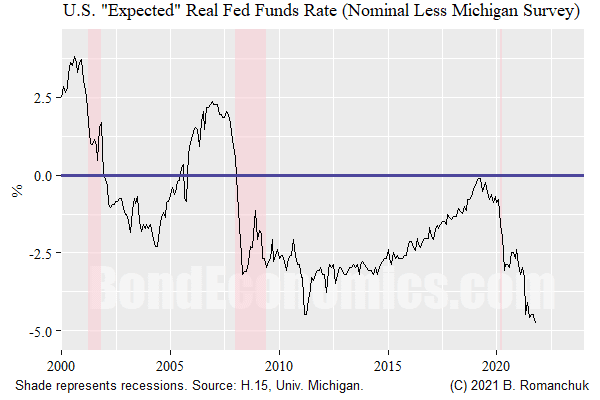 The problem with “expectations” is deciding whose expectations matter. In neoclassical models, we just have a small number of representative households (often one) who are the only entities that matter, so you just need to survey them, since the uncountable infinity of other agents will just agree with whatever representative agent represents them. The problem in the real world is that we never seem to be able to pin down who exactly is the representative agent, and so we have an inconsistent mish-mash of inflation survey results.

The figure above shows the Fed Funds rate deflated by the inflation expectations component of the University of Michigan Survey. On that measure, the real rate started 2021 at -2.9% in January, and dropped below -4% in May, ending the year around -4.8%.

What is the problem that I see? If we look back at the (admittedly mangled by the outlier) HLW r* estimate, it was getting close to 0% at the end of 2019. The real rate based on the Michigan Survey started 2021 about 300 basis points below that, and ended up about 500 basis points lower at year end.

(The HLW algorithm uses a smoothed version of inflation — adaptive expectations! — so the inflation rates would presumably be lower in 2021, at the cost of being higher if and when inflation rates moderate.)

If we are to believe neoclassical theory, deviations of the real policy rate from r* ought to have a somewhat symmetrical effect on the economy. Unless r* magically moved a lot lower in 2021, there should have been a stimulative effect equivalent to hiking rates hundreds of points above r*.

And that is not all. We had a large fiscal stimulus — which is of course ignored in the HLW algorithm, because everyone knows fiscal policy does not matter — and there is whatever stimulative effect provided by the Fed’s balance sheet expansion.

If one believes neoclassical macro theory, then one should expect inflation to rip even higher in 2022. (Which does put the Fed’s stance into a curious light.) I cannot guarantee that will not happen, so we will need to wait and see. But if it does not, it does raise the question: does r* even exist?

The whole theoretical core of DSGE models are based on the assumption that households trade off future consumption versus the present, and if they do not consume now, they invest in Treasury bills. The ratio of present to future consumption is given by the real interest rate: the Treasury bills have a nominal return, but the future prices of goods should rise by the expected inflation rate.

If the real interest rate does not matter, then that core mechanism of the model is meaningless. Although it was possible to add epicycles to handle things like the financial system, it is harder to replace core dynamics.

Alternatively, we can ask: what is the value of the mathematisation of economic theory, if we cannot answer a basic question like what level of the policy rate is where it starts to slow inflation and/or growth?