Slicing And Dicing The CPI 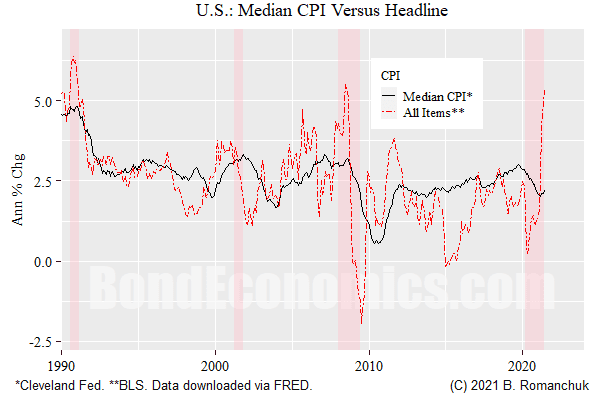 The latest CPI report showed a spike in the core measure (excluding food and energy). The core inflation rate has hit a modern record, which has prompted mutterings about monetary debasement in certain quarters of the internet.
The reason why economists look at core inflation is that they want to see the underlying trend. However, stripping out food and energy is not the only way to do it. An alternative technique is to take the median change each month (or strip out the extreme changes). The Cleveland Fed calculates a median CPI series, which was also updated today. Although the monthly change did rise in the latest month, if one creates an index based on the monthly changes, the median CPI is just recovering from a plunge in 2020 (black line in the figure above).
It is entirely reasonable to be unhappy with economists who strip out all the rising prices from price indices to argue that inflation is contained. That said, the median CPI did a decent job of capturing the underlying trend in the modern era, unlike the erratic All Items (headline) CPI measure (red dotted line).
I am biased towards the recent rise in prices being largely transitory, but I am not attempting to forecast inflation. I think the direction of wages will matter than the prices of goods and services. Wage costs have risen, but I am unconvinced that there has been a major structural change in the balance of power between workers and employers.
(Note: I may expand these comments about the median CPI as a book section, but that will take time to appear.)
Email subscription: Go to https://bondeconomics.substack.com/
(c) Brian Romanchuk 2021
Posted by Brian Romanchuk at 12:27 PM