In my upcoming book on inflation, the focus is on consumer price indices, but there are other aggregate prices indices that are of interest. In this article, I discuss the GDP deflator.

Note: This article is an unedited draft of a section in my planned book “What is Inflation?” As the title suggests, the book is meant to be introductory — what inflation is, and not theories about inflation. I hope that it will be fairly easy to finish off, and would be a shorter primer sold at a cheaper price. I was hoping to publish this last week, but events meant that I switched to a summer publishing schedule earlier than planned. (A family of skunks moved in under my shed, and so I had to do some landscaping work to critter proof it. I was forced to concentrate the work last week due to working around weather forecasts.) I hope to stick to at least one article per week, although if it heats up, I might hide inside with the air conditioning and write.

Gross Domestic Product (GDP) is the measure of all final goods and services (measured at market prices) produce in an accounting period, such as a quarter of a year in country. (Definition adapted from Macroeconomics, by Mitchell, Wray, and Watts.) It is the broadest measure of activity of an economy, and GDP growth is often taken to be a synonym for economic growth.

There are two ways of defining GDP: in nominal or real terms.

If we want an equation for GDP, we have:

In this case, “investment” refers to investment into fixed assets and inventory, and not the purchase of financial assets (a common usage of the term). Also, net exports are exports minus imports.

One simple definition of a recession is that real GDP declines for two quarters. It is possible that nominal GDP could rise even when this is happening.

The GDP deflator is a time series that relates real GDP to nominal GDP. Its growth rate can be viewed as the economy-wide inflation rate.

There are complications behind the definition of GDP that are perhaps not obvious. Not every transaction counts – it has to be the purchase of final goods and services. This means that intermediate transactions get netted out. For example, having goods flow through wholesalers will generally not add to GDP – what matters is the final sale to a consumer (or a firm that uses the item). Also, buying and selling financial assets – or even an existing house – do not add to GDP. This means that changing stock prices do not affect the GDP deflator.

From the perspective of the price deflator, the GDP definition also includes one unusual factor: imports subtract from GDP (since the equation uses net imports). This means that imports are mysterious negative goods, which means that their prices work backwards with respect to GDP.

GDP Deflator Compared to the CPI 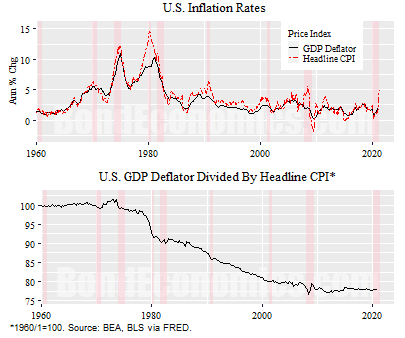 The above figure compares the annual inflation rates for the GDP deflator and the All Items (headline) CPI for the United States. (The qualitative situation in other countries will generally be similar to the above.) At the beginning and end of the period shown, the two inflation rates were similar. This is demonstrated in the bottom panel, where the (rebased) ratio of the two measures is steady. However, CPI inflation tended to be higher for the middle of the time period (late 1970s to the early 2000s).

If we have a long forecast horizon, we normally expect the CPI to rise in line with the GDP deflator, on the basis that there is some notion of a “general price level” of the economy that both measures are supposed to reflect in the long term. However, they do have different methodologies and different weightings, and so we can have periods where the two inflation rates diverge.

(As will be discussed in the next chapter, there is a mythology that the CPI understates the price level. The above chart shows that the increases in the CPI outstripped other measures of the price level.)

The GDP deflator is less inherently interesting than the cost of living, but it is significant for macroeconomics.

Nominal GDP growth is (approximately) equal to GDP deflator inflation rate plus the growth rate of real GDP. (There is a small compounding effect which is why this is an approximation.) If the rate of inflation increases, either nominal GDP growth must rise, or real GDP falls.

This reality is not obvious if we look at the cost of living as an isolated property of the economy. From the perspective of an individual, one can fear that prices will spiral out of control while one’s income is unchanged. Although this certainly can happen, from the perspective of society, the more typical outcome sees incomes for at least some groups rising.

(The main highly negative scenario is a rapid rise in imported goods that pass through to the overall price level. In this case, the domestic standard of living falls.)

As I discussed in Modern Monetary Theory and the Recovery, the post-1990s policies that clamped down on labour power dampened the ability to generate inflation in the developed economies. This meant that various price spikes did not convert into generalised high inflation, confounding the ongoing calls for inflation outbreaks by a certain segment of financial market commentators.

Another place where the trajectory of the deflator matters is in the discussion of fiscal policy. A standard working assumption of mainstream economists is that real GDP growth will stick near some “trend limit” in the long term. (Post-Keynesian economists debate that assumption, but that debate is beyond the scope of this text.) For example, let us assume that they believe this real growth rate average is 2%. In that case, nominal GDP growth will average 2% plus the GDP deflator inflation rate. Meanwhile, this long-term growth rate matters for the growth of the debt-to-GDP ratio. If nominal GDP growth increases, the debt-to-GDP ratio will tend to fall. This then explains the emphasis of “inflating away the debt” in economic and financial commentary. (I believe that this type of analysis is questionable. I discuss fiscal sustainability in Chapter 7 of Understanding Government Finance.)

The GDP deflator obviously overlaps with the consumer price index. This means that they should have similar inflation rates over the longer term. The key thing to realise is that the economy wide inflation rate cannot take off like a rocket without there being side effects in other economic activity variables.