Who Sets The Yield Curve?

There was a debate on my Twitter timeline whether or not the Fed sets the entire yield curve. Since I am in the midst of writing a MMT primer, the party line is bubbling up in my mind: the yield curve is a policy variable. However, the exact mechanism is not entirely obvious, and the situation is arguably ambiguous.


Everyone’s realizing that the entire yield curve is set by the Fed, which is no more true today than it was 20 or 30 years ago. https://t.co/T5Iysd8gwo
— Joe Weisenthal (@TheStalwart) August 8, 2020

This got a response from David Beckworth:


I normally enjoy Joe's hot takes, but this one... yikes. It is a good example, in my view, of why relying too heavily on the "money view" (i.e.liquidity preference view) of interest rates can cause one to miss the forest for the trees. Let me explain...1/n https://t.co/EjUltLb4dF
— David Beckworth (@DavidBeckworth) August 9, 2020

I am closer to Weisenthal's view than Beckworth's, although I have reservations about the wording (as I will discuss). I do not want to go through a detailed response to Beckworth's comments here.


What We Can Say for Sure

One of the problems generated by Economics 101 textbooks is that readers have a tendency to refer to "the" interest rate. There is a multitude of fixed income instruments, and each has its own rate of interest/yield. At the minimum, we need to refer to a "risk-free curve." But even that is a simplification - there are a number of cash instruments that qualify as "risk-free" in the United States.

(There are also derivatives based on these instruments that should be priced in a coherent fashion as well.)

Only the first instrument listed -- rate of interest on settlement balances -- is explicitly set by the Fed. The others are influenced by open market operations, with the objective of keeping the Fed Funds rate in its band. (The targeting procedure has changed over time.)

Specialists whine whenever spreads appear between these various interest rates at short maturities, and write breathless editorials about the Fed "losing control of interest rates!" However, anyone who understands the concept of duration realises that the returns implications are exceedingly uninteresting to anyone who is not a money market trader.

However, the sloppiness of Fed operations means that when we write "the Fed sets the short-term risk-free rate" implies that it might need to undertake various gymnastics to keep these various risk-free curve in line with each other. Nevertheless, the basic principle remains that short-term rates will stick near the Fed target, barring the U.S. Congress threatening to default (e.g., debt ceiling woes).

The question remains: what about longer-term yields?

The issue with Joe Weisenthal's tweet is that he wrote that the yield curve is set by "the Fed," when in fact it is the Fed's reaction function, as measured by market rate expectations.

Given that the initial maturities on the risk-free curve are set by Fed officials, forwards reflect the market pricing for future settings. This market pricing may not align with what Fed officials think they will do in the future, which was the alleged "Conundrum" of Al Greenspan. 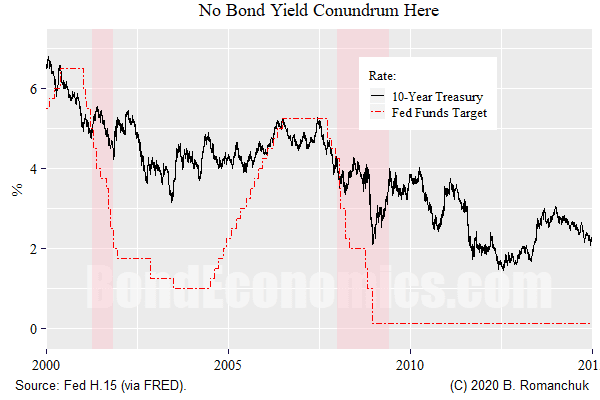 The figure above demonstrates why the worry that bond yields were "too low" in 2005 makes no sense: realised rates over the subsequent decade were much lower than those "low" yields. The market is supposed to be a forecasting mechanism, are we to be shocked that its forecast was at least roughly correct, while a bunch of central planners who were completely blind-sided by the Financial Crisis were wrong?

Government officials shy away from predicting recessions (or that they have completely failed in their duty to regulate the financial system). As such, there is no reason to believe their forecasts of the future. The only thing that can be trusted is where they are setting the short-term rate now; where the short-term rate will be in the future depends upon future economic conditions -- which may be nowhere near where policymakers are publicly predicting.

The Twitter discussion bled into "yield curve control" -- the central bank setting the entire curve directly by putting price limits on Treasury securities, and intervening to defend those price limits. Doing so is certainly possible, but doing so would obliterate any information in the yield curve. Bond pricing would shift to guessing where the target range would move, coupled with carry analysis to see whether the target curve shape is coherent with projected short rates.

In such a case, Fed officials are arguably setting the entire yield curve, and there is no distinction between them and the reaction function.