Never Reason From A Change In Monetary Agggregates

I have been looking at questions on the Economics Stack Exchange, and many of them followed a depressing pattern: where is the inflation that results from the change in monetary aggregates? This is a common concern that has been popping up since the end of the Financial Crisis (even earlier in the context of Japan). The prescription is straightforward: one should never reason from a change in a monetary aggregate. The reason behind this is that monetary instruments are financial assets, and the size of the stock held depends upon the portfolio preferences of the private sector, which should be expected to be unstable.

This helps confirm that the message from Abolish Money (From Economics)! has not caught hold yet in the public imagination. 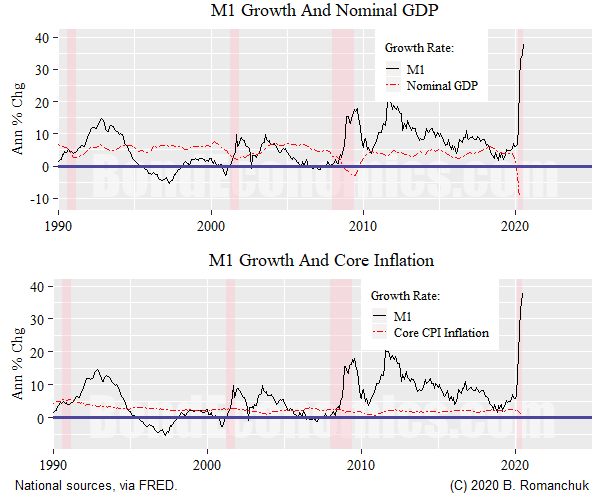 The chart above summarises the pitiful nature of money growth as an indicator in recent decades. We see massive accelerations and the occasional deceleration, while nominal GDP and (core) inflation chugged along at sedate paces (with a bit of excitement in 2020, but nothing like the jump in the money supply).

From a post-Keynesian perspective, this is exactly what one should expect.

The first thing to note is the belief that one needs a stock of money to transact is obviously not in touch with modern reality. I spent most of my career as a financial analyst with a maximum of about $400 in narrow money holdings at the end of the day: all my inflows were immediately swept into a money market fund or trading account, and I used my credit card for any expenses that went beyond my $400 bi-weekly "fun money" budget. Meanwhile, I was a home and car owner, etc. My cash aversion may have been extreme, but it demonstrates that end-of-day narrow money balances are not required to function in a modern capitalist system.

Instead, monetary instruments are components of portfolios, and the stock of those balances depends upon sentiment about portfolio construction. The Keynesian argument is that money balances are held to hedge against fundamental uncertainty: they can always be liquidated near par in order to meet cash outflows.

In the developed countries, the private sector has a large stock of financial assets, and there is considerable financial innovation. This allows for extreme rapidity in the restructuring of portfolios, hence monetary aggregate growth should be jumpy. Having central bankers mucking around with their balance sheets adds to this instability. As such, the portfolio weighting is moving much faster than nominal incomes -- explaining the figure above.