Breakeven inflation rates in the United States have recovered from their crisis swoon, but remained at depressed levels. This is in contrast to the rather feverish inflation predictions that are coming from the usual sources, like gold enthusiasts.

This article is brief, just commenting on what I see as the implications of current pricing. I am largely reiterating my views that appeared in Breakeven Inflation Analysis. I am seeing commentators discuss the implications of low "real" yields, which I think is the wrong premise. As I discussed in Section 4.2 of my book, the breakeven inflation rate is what matters. The quoted yield on inflation-linked bonds (in my view, "real yield" is a term to be avoided, due to the ambiguity in the definition created by economists) is just the residual of the two metrics that matter: the benchmark nominal yield, and the breakeven inflation rate. All the quoted yields are telling us is that the markets are predicting inflation to be somewhat lower than desired, and that New Keynesian central bankers at the Fed will be New Keynesians. 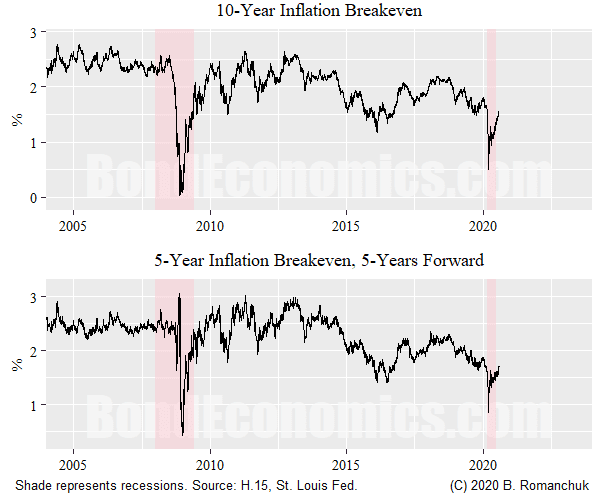 The term breakeven inflation rate was not chosen at random: it is the forward average rate of inflation for which the inflation-linked bond has the same total return as the nominal Treasury. In other words, if inflation is above the breakeven rate, the 10-year inflation-linked bond has a greater total return than the 10-year conventional (nominal) bond (and underperforms if below). (Note that the figure uses the approximate breakeven generated by taking the spread between bonds; unless the bonds are not trading near par or of very short maturity, this is a very good approximation of the exact breakeven inflation rate.) One of the stranger comments I repeatedly see is that breakevens have nothing to do with forecast inflation - which assumes that fixed income market participants pay no attention to relative value when trading.

The bottom panel shows the 5-year breakeven inflation rate, 5-years forward. (One can trade this instrument by taking offsetting positions in 5-year and 10-year breakeven inflation trades, which are themselves spread trades - or by calling up a friendly dealer and asking for a quote on a forward inflation swap.) Theoretically, the forward rate is immunised against near-term oil price movements; what matters is the average change over a future 5-year period. As the chart suggests, that theory may not align well with practice.

In any event, the forward rate has recovered to levels that are near the cyclical lows of the previous cycle. That is, there is no expectation of a vibrant recovery, with a tight labour market. This is definitely not aligned with the wailing about "MMT is coming!" on my Twitter timeline.

This segues into my latest manuscript, which is on the topic of the upcoming recovery. My argument is that the base case would be a repeat of the glacial recoveries seen in the post-1990 era. The theory behind MMT helps explain why economies have been so slow-moving -- and what could be done to return to the economy closer to a high pressure labour market. I have a few small sections to write, and then my revision process starts. Since the manuscript ended up longer than expected, my timeline for publication has been pushed back...