Is MMT Only Applicable To The U.S.?

One common line of criticism relates to what is termed open economy considerations – can the foreign sector create constraints on fiscal policy that are not apparent in closed economy models? One simplistic variation of this is the argument that “MMT only applies to the United States,” that is, only a global hegemon that issues the reserve currency can afford to ignore the external sector.

(Note: this is an unedited excerpt from my MMT primer manuscript.)

This area of criticism is the most substantive area where other post-Keynesians split with MMT proponents. I would guess that this is where one would draw a dividing line between the two camps (if we put aside pure academic turf war disputes).

The particular argument that it is only applicable to a “reserve currency” is arguably silly when one invokes Japan, at which point epicycles are added to the argument (“the Japanese owe the money to themselves!”). Furthermore, one of the founders of MMT (Bill Mitchell) is Australian and I am Canadian, so if a reserve currency were seen as required, we presumably would have noticed. As such, I will deal with what I see as the good faith version of the critique – that the external sector can impose constraints on fiscal policy. That is, instead of “bond vigilantes” curtailing government spending, “foreign sector vigilantes” will ride into town.

Finally, this section will address a related point – that “MMT is not applicable to developing countries.”


Basic Mechanics – Foreigners Have No Privileges

The first thing to note is that foreign bond holders have zero special privileges in the developed countries. Unlike developing countries that issue bonds adjudicated in foreign courts, developed country bonds are mainly issued under local law. (There is a small residual of foreign currency debt, e.g., the Canadian Federal Government issues some U.S. dollar bonds to finance its relatively small foreign exchange reserve.)

Whether a U.S. Treasury is owned by a local or a foreigner makes no operational difference to how payments are made by the Treasury. As such, the residence of owners makes no difference for default risks.

All that can happen is that foreigners who own the government bond can sell, netting them local currency cash. Next, they can trade that cash away in the foreign exchange market.

The true potential concern is that the domestic currency will lose value in the foreign exchange markets.

In fixed currency regimes, such devaluations were associated with inflation. At the extreme, hyperinflations result from when domestic prices are effectively set in a hard currency terms, and local prices are those foreign prices multiplied by the exchange rate. As the local currency value plunges towards zero (in foreign currency terms), the multiplier goes to infinity. (Academic research on hyperinflations use foreign exchange quotations to estimate inflation rates, since there is no way of reliably recording the domestic price level when the monthly inflation rate is over 50%.) 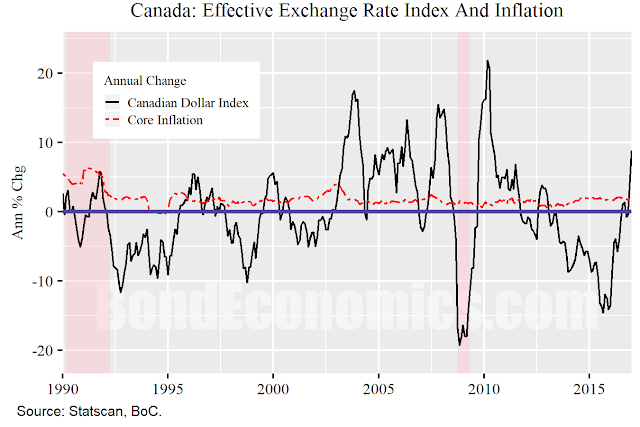 However, in an environment where the currency is floating and the economy achieved inflation stability, currency movements have almost no measurable effect on inflation. The figure above shows the gyrations in the Canadian effective exchange rate index (from the Bank of Canada) for the period 1990-2017. (The available data ends in 2017.) Canada is a small economy that is extremely open to trade, but one with a long experience a floating currency (the Canadian dollar floated long before the demise of Bretton Woods). As is often pointed out by developed economy central bankers, inflation has been stable since the early 1990s – but currency markets continue to move.

There are major differences in opinion among economists as to the importance of the exchange rate on domestic inflation. I would argue that the empirical evidence is that the estimated effects are quite low, whereas the other side typically invokes potential regime shifts that by definition will not be predictable by using historical data.

To what extent this criticism is legitimate, it revolves around the phrasing of how “inflation” constrains fiscal policy: what weight does one put on the external value of the currency? The reality is that MMT proponents do not ignore the external sector (as some critics suggest), rather there is a major disagreement about the relative importance of the currency value in determining the domestic price level.

That said, the premise of a floating currency is that the price floats. If policymakers react to every wiggle in the foreign exchange markets, then the government is backing into a de facto peg framework. Countries like Canada have moved towards a policy of benign neglect of the exchange rate, and there has been no reasons so far to question that decision.

Another angle of attack is the question of the management of trade relationships. Many post-Keynesians seem to believe that countries are about to re-launch the Bretton Woods agreement, and this time, policymakers will follow Keynes’ vision. A new system of managed exchange rates and trade will come into existence, but this time, with more symmetric obligations between surplus and deficit countries.

The desirability of such a system is a political economy question. From the Canadian perspective, such a scheme would effectively be throwing away our national sovereignty. Meanwhile, it is hard to see how Europeans, the Americans, the Japanese, and the Chinese Communist Party will submit to some supranational body that will effectively overrule all domestic policy setting. The political unreality of such a scheme makes it completely unsurprising that MMT proponents spend little time discussing it.

An alternative phrasing of the previous arguments is that the insights of MMT cannot be applied to developing countries. These countries allegedly lack the capacity to act as if they have currency sovereignty.

This is a subject on which I have no strong opinions. My experience is with interest rate dynamins in developed countries. Meanwhile, my experience is that whenever someone announces that they are an expert on emerging markets and then offers an opinion on developed country rates markets, they are almost always miserably incorrect. My charitable assumption is that the policy environment for developed economies and developing economies is quite different, and so knowledge may not be transferrable.

Stephanie Kelton discusses this topic in Chapter 5 of The Deficit Myth, and my thinking matches hers. The rest of this section will outline how I interpret what she wrote. If one wants more information, one would need to dig into the MMT academic literature, which features policy proposals for particular countries. I am certainly not the person to debate the merits of a job programme in India (or similar).

The international trade system did not arrive by accident or solely the result of market forces; it followed arrangements set up after World War II. Although the economists who set them up may have expected different outcomes, the reality is that these arrangements have not been optimal for the masses of the population. Developing countries were pushed into exporting raw materials, while importing critical manufactured goods (like medicines). It should be noted that the countries that did in fact develop – such as on the Asian periphery – did not follow the “free market” solutions peddled by international organisations. Japan (whose economy was flattened in World War II) also pursued an export-driven strategy, but manufacturing was under the close watch of bureaucrats, while financing was the keiretsu (convoy) system, with industrial groups financed by a bank. (The South Korean chaebol system followed this model.)

For the poorer countries, they are trapped by the need to import manufactured goods, which are paid for with “hard” (floating!) currencies. This configuration is a real economic constraint on policy, and no amount of monetary or fiscal wizardry can fix this.

A century ago, Western Canada consisted of colonies that were mismanaged by venal, stupid, and sociopathic elites in London and Ottawa. Prairie populists arose and pushed economic arrangements in a saner direction. The objective is to stop borrowing in foreign currencies; how to get there will depend upon political conditions on the ground.