Moving Into The New "Normal" 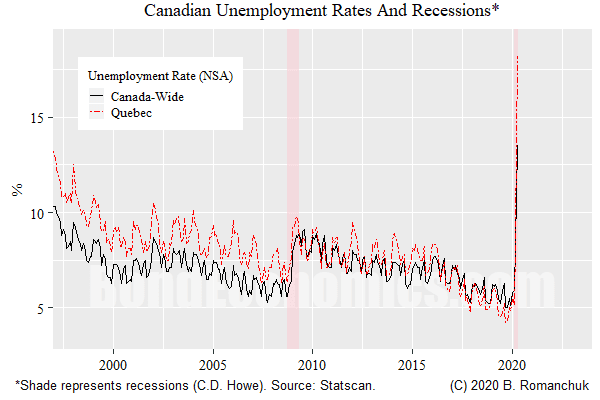 My local economy appears to be moving towards what is best called the New "Normal:" a state of muddling through in such a fashion so as to keep the spread of the coronavirus under control. From an economy-watching perspective, the closest to clean data for Canada and Quebec will appear in June. Since the latest official unemployment rate data (above) is for April, the implication is that it will be considerable time for the data to catch up.

Although the Quebec economy is not going to be a major driver for the global economy, I will largely focus on the situation here on the principle that it is best to stick with what you know. The situation here appears to have similarities to many other developed economies. However, the details and timing will vary.

The economy has been moving through a variety of stages.
There are worries about a "second wave." Although this might make some sense to people who want to project literary narratives upon the world, we are stuck in a period of viral spread. All that can happen is that the speeds of spread will speed up or slow down. If we look at the data, what we see is that most people are more sensible than online ideologues, and are avoiding taking infection risk as much as possible. This means that the effect of official policies is not particularly large, other than policies that force people into risky activities.

The economics of the New "Normal" feature a few offsetting forces.

The advantage that Canada appears to have versus the United States is that provincial finances are more flexible (discussed earlier), and there should not be a wave of sub-sovereign austerity policies.

Under the assumption that central banks keep the financial system away from cascading bankruptcies, these forces are slower-moving than the shocks of the last few months. Eventually, traditional economic data will roughly reflect the current situation (even with publication lags). Currently, the only way to get a handle on the economy is using more novel real-time data (which I only have limited access to).

The remainder of this article will be zeroing in Quebec and Canada.

Given the difficulty of measuring many economic time series recently, the most useful conventional data are probably unemployment rates. However, the data are being horribly distorted by seasonal adjustment factors, and so we need to switch to the unadjusted data (which are what are shown in the figure above).

Given the rapidity of the spike, I will give the monthly figures for Canada. In February (not yet affected), the unemployment rate was 5.9%. March and April then jumped to 8.4% and 13.5% respectively. In Quebec, the April figure was 18.2%.

The May data will presumably be similarly dire as April's. However, if there is going to be a mechanical snap back in the unemployment rate, it should show up in June or July. At which point, it will be much easier to orient economic discussions, as the scale of the unemployment problem will be clear.

My instinct is that re-opening will not need to be reversed, although it may be that health regulations will come down hard on certain types of activity in response to new outbreaks. The main question mark revolves around the role of children as carriers. Quebec closed schools in the Greater Montreal area until next autumn, so this will be less of a concern.

Under the assumption that my readers are not familiar with Quebec geography, I would note that Montreal is the largest city in the province (and the main concentration of the English-speaking minority). Montreal is an island, with suburbs on both the North and South sides of the island. It is the main centre of the COVID-19 outbreak in Quebec, and even Canada.

The Montreal Gazette has a free-to-read live update page each day, and today's update has a map of the distribution of the outbreak at the provincial level, and the neighbourhoods within the island of Montreal (but missing the off-island suburbs: link).

The data provided to the public is slightly opaque, but I have seen arguments that the cases follow certain themes (which are consistent with the neighbourhood data).

The challenges faced by the hospital and senior care systems are worrisome. However, the spread rates in those milieus are quite higher than in other activities. Under the assumption that offices remain vacated due to working from home, community spread does not appear to be greatly affected by most industries, with the exceptions well known (bars, sports events, air travel, etc.). Since those high-risk activities are still curtailed, I do not see any reason for there to be a linkage between the economic re-opening and spread rates.

I will just finish off with some themes I would look at once more economic data roll in. For case numbers, CTV has a good summary page: link.
(c) Brian Romanchuk 2020
Posted by Brian Romanchuk at 2:37 PM