Comments On Tyler Cowen's Review Of "The Deficit Myth"

Tyler Cowen did a review of "The Deficit Myth" by Stephanie Kelton, which is to be released June 9 (Amazon affiliate link). Since I have not read the book yet myself, I cannot comment on his views about the book. However, Cowen makes some criticisms of Modern Monetary Theory (MMT) that are worthwhile responding to.

I am turning to writing a short primer on MMT, and will probably have a chapter on critiques that I feel are useful. (My estimate is that over 90% of "MMT critiques" consist of people making stuff up, based on the contents of other "critiques.") I expect that I could use some of the discussion here as examples. The review consists of a dozen numbered short points, and I will only respond to the ones that I see as being useful, and not solely related to the book.

1. Much of it is quite unobjectionable and well-known, dating back to the Bullionist debates or earlier yet.  Yet regularly it flies off the handle and makes unsupported macroeconomic assertions.

This is a new phrasing of the standard "MMT has nothing new, and what is new, is wrong" line that critics have been using in an attempt to dismiss MMT without taking it seriously.

In the case of the book review, it is curious. Although I have not read it, it is aimed at a wide audience. Material that might be novel for academics is not going to interest most readers, and the book would bomb. This critique is only of interest for academics squabbling about priority of research. As an ex-academic, I have a cynical view of such squabbling.


2. Like many of the Austrians, Kelton likes to insist on special terms, such as the government spending “coming first.”  You don’t have to say this is wrong, just keep your eye on the ball and don’t let it distract you.

I cannot comment on Kelton's writing in this book, but I've seen similar arguments.

The next point is longer.

3. “MMT has emphasized that rising interest income can serve as a potential form of fiscal stimulus.”  You don’t have to believe in a naive form of Say’s Law, but discussions of demand should start with the notion of production.  Then…never reason from an interest rate change!  [emphasis in original] Overall, I sense Kelton has one core model of the macroeconomy, with a whole host of variables held fixed (“well…higher interest rates means printing up more money to pay for them and thus greater stimulus…”), and then applies that model to a whole series of quite general problems and questions.


I will deal with the bolded admonition: "never reason from an interest rate change!" As far as I can tell, this injection is a tribal marker used by fans of Milton Friedman to signal their allegiance, and offers no useful content.

The first thing to note is that it is obviously wrong -- we can calculate the interest expense of the government to the penny given accurate paths of the yield curve and government debt issuance. Given the importance of central bank policy to determining the level of the yield curve, we can judge interest burdens reasonably well given the path of the policy rate and decent fiscal projections. As such, only the functionally innumerate would not take into account interest rate changes when discussing interest expenditures ("reasoning from interest rate changes!").

I will then turn to "discussions of demand should start with the notion of production." Note that this is another moral injunction -- Thou shall start with production! However, there is no good reason why reverting to a pre-Keynesian notion of economics offers insights of use. Every attempt to do so I have seen has failed miserably.

Finally, I cannot comment on whether Stephanie Kelton has only "one core model," but arguing that interest spending has zero effect on demand requires believing that the multiplier on such expenses is zero. This seems implausible. Furthermore, one may note that in the current institutional environment, sustained lower interest rates forces pensions to raise required contributions, and so lower interest rates will raise required saving for retirement (all else equal).

The next point is intriguing.


5. We are told that the U.S. “…can’t lose control of its interest rate”, but real and nominal interest rates are not distinguished with care in these discussions.  The Fed’s ability to control real rates is fairly limited, though not zero, and those are empirical truths never countered or even confronted in this book.

These statements are probably a zinger of an observation for an Economics 101 final exam, but it displays an amazing obtuseness. Let us assume that the nominal rate is locked at 0%. How can the private sector raise the real interest rate in response to loose fiscal policy? It needs to cut prices -- that will show the gummint, they can more stuff for the same number of dollars! The lack of thinking through this obvious point is breathtaking.

The MMT line is that real resource constraints are the ones that matter, with the constraint showing up in the form of inflation (which ties together real and nominal variables). I have familiar enough with Stephanie Kelton's other writings to find it hard to believe that she got this principle incorrect.


7. It still would be very useful if the MMT people would take a mainstream macro model and spell out which assumptions they wish to make different, and then solve for the properties of the new model.  There is a reason why they won’t do that.

The first thing to note is that if we are referring to Kelton's book, discussing mathematical models is near-guaranteed suicide for book sales (outside of textbooks, and only a few Economics 101 textbooks sell). One would need to go to the academic literature to see such critiques, and that is a step that extremely few critiques of MMT are willing to do (other than the original post-Keynesian critics).

If we look at the academic literature, most of the critiques of neoclassical models predates MMT, but MMTers would point to that literature. Let us take a grab bag of critiques, which Tyler Cowen seems ignorant of.

If we take simpler DSGE models, that is almost the entire model. The only point of agreement from MMT would the role of expectations and the central bank for determining the yield curve (although other post-Keynesians might disagree).

8. I don’t care what the author says or how canonical she is as a source, a federal jobs guarantee is not part of MMT.

This point is hilarious. Tyler Cowen is not the arbiter of the boundaries of MMT. Meanwhile, the founders of MMT insist that the Job Guarantee is foundational.

11. For all the criticisms of the quantity theory, I would like to know how the MMT people explain the Fed coming pretty close to its inflation rate target for many years in a row, under highly varying conditions, fiscal conditions too.

This is another head-scratcher. 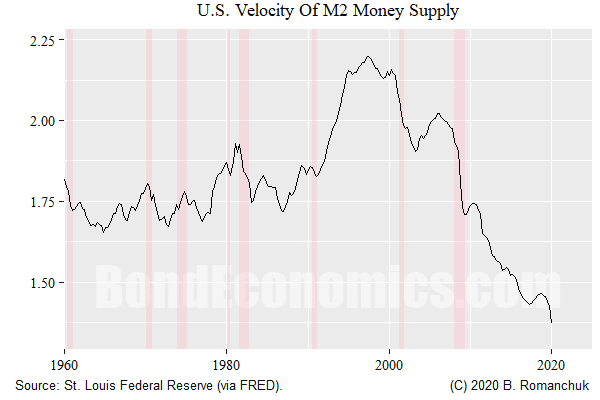 The reason why Monetarism had become the butt of jokes when I started in finance in late 1990s is the inability of quantity theory to explain inflation. As can be seen above, velocity of M2 was unstable throughout the low-inflation period that started in 1990. The only time that velocity appeared to work was before the mid-1980s, which allowed Milton Friedman to do his data-mining exercise. In other words, Cowen managed to prove the opposite of what he wanted.

The MMT explanation for inflation stability is rooted in post-Keynesian theory, as well as the analysis of the labour market. Bill Mitchell (one of the founders of MMT) wrote Full Employment Abandoned: Shifting Sands and Policy Failures with Joan Muysken (Amazon affiliate link) which discusses this. Developed countries launched a coordinated attack on labour power, following the template of the OECD Jobs Study. The inability of workers to force through wage increases kept the cost pressures under control. Of course, this was assisted by the off-shoring of production to low-wage countries, as well as the export-led growth model followed by Asian countries.

Once again, we are faced by another weak attempt to criticise MMT. The reality is that the strongest criticisms have come from the fratricidal academic infighting within the broader post-Keynesian community. Critics outside the post-Keynesian bubble are unwilling to read the academic literature, and all we are left with shallow jabs based on responding to online commenters.