The Incoherence Of Yield Curve Control 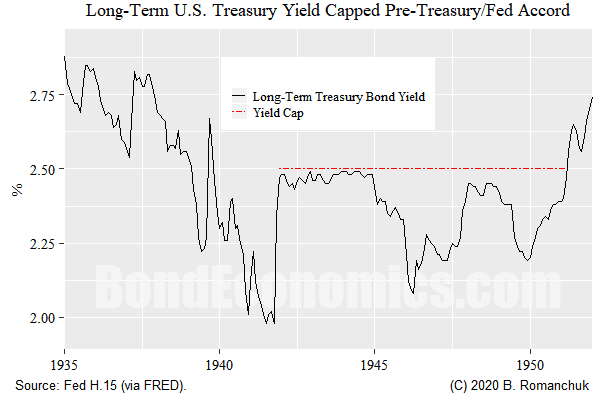 Yield curve control -- setting bond yields by the central bank -- has returned to discussion. Mainstream economics over-emphasises the role of interest rates in guiding the economy, and based on previous experience, it seems entirely likely that some form of new policy will be attempted to counter-act economic weakness. The main options appear to be negative interest rates and yield curve control, and it seems clear that Fed officials prefer yield curve control to negative rates, Yield curve control will either accomplish very little, or be viewed as a mistake in retrospect. That said, it is still a more sensible policy that large scale purchases of Treasurys by the Fed (Quantitative Easing).

From the perspective of Modern Monetary Theory (MMT), this topic is interesting, since fixing term interest rates has a strong resemblance to a proposed policy of locking interest rates at zero. However, the implementation that would be used by the Federal Reserve would be the wrong way to do it, and missing the point of the policy.

Setting a trading range for Treasury yields is not unprecedented policy for the Fed. Even if we put aside recent experiments elsewhere, Treasury yields were capped at 2.5% during World War II and the immediate post-war era. I discussed this very quickly in one of my very early posts, which also linked references on the topic. Keynes also referred to such a policy in the General Theory.

Setting an upper bound for Treasury yields is a straightforward operation for the Federal Reserve: it just announces the cap level, and purchases Treasurys without quantity limitations whenever yields push near that level.

So long as the long-term yield is higher than the overnight rate (in particular, the repo rate) and nobody expected the cap to be lifted, investors will do most of the heavy lifting. They will buy the bonds at yields below the cap level, and they can finance the positions with positive carry. There is very little risk for the investors, so long as they can sell the bonds to the Fed at the capped rate. This is like any other peg set by a central bank -- as long as the peg is credible, it will not need to intervene too aggressively for the peg to hold.

However, if investors expect the peg to disappear and yields to rise significantly above the cap, they will not be willing to hold the bonds. In that case, the Federal Reserve could be forced to buy up the entire stock of issued Treasury bonds.

By providing a price signal, this policy is more effective than purchasing volumes of Treasurys (Quantitive Easing), since market participants had zero guidance on what level of Treasury yields the Fed wanted to achieve. 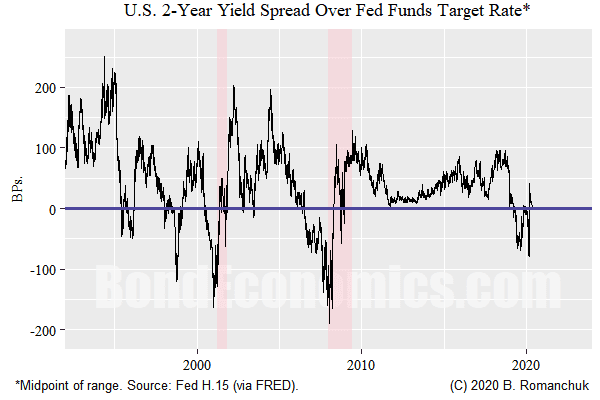 One potential implementation of yield curve control is to only cap yields up to a certain point of the curve, for example, the 2-year. Such a policy would be easily rolled off. For example, imagine that the policy is put into place until 2023. At which point, the cap would apply to bonds maturing in 2025. All that needs to be done is then not roll that maturity date forward, and so the policy would have been exited by 2025.

However, such a policy accomplishes very little in practice. The figure above shows the slope between the Fed Funds target rate (midpoint of a band when the Fed switched to using a band) and the 2-year Treasury. If we look at the mid-2010s, we see that the slope was negligible. This is what one would expect in an economy that is stagnant. The only thing such a policy would prevent was the knee-jerk selloffs that resulted from bond investors over-reacting to Fed rate cuts (as in 2010). Given the magnitude of the economic contraction, I doubt that a similar sell-off could be engineered any time soon.

But even if such a sell-off materialised, pushing rising forward rates more than two years into the future will not accomplish much. Term borrowing rates would rise, which is what the Fed presumably wants to avoid.

To be more interesting, Treasurys of all maturities would need to have a yield cap. The problem is straightforward: if you cap a 10-year note yield, it will not be possible for the policy to naturally roll off for about a decade (since a cap on a one-year is not too significant).

Realistically, the Fed would have to abandon the policy in a way that has bonds jumping from capped status to floating yields. Unless the Fed is willing to buy every bond holder out, widows and orphans will show up and burn the effigies of Fed officials on the steps of the Federal Reserve headquarters.


How Will it Affect the Economy?

I am in the camp that lowering rates by small amounts will do very little to stimulate growth, and we can look at recent cycles for evidence for that assertion. Furthermore, capping Treasury yields may matter little if the Fed is forced to buy a large portion of the float, pushing everyone else into riskier securities. Credit spreads would just peel off from the Treasury curve, and thus there would be no benefit to private sector borrowing costs.

The effect may be more psychological, as was the case for Quantitative Easing. Hard money advocates will scream about "price discovery," and insist that hyper-inflation is around the corner. This might generate some frantic investment activity, which may or may not add to aggregate demand. However, that is what happened in response to "money printing" worries in the last cycle, and the recovery was still notoriously slow.

One might argue that capping Treasury yields would open policy space for fiscal policy. This is not really the case. "Fiscal space" is a psychological construct of policymakers, and the elites in charge of fiscal policy would much prefer that monetary policy do the heavy lifting. People would very reasonably argue that bond yields would spike when the yield curve cap is lifted, and so the Treasury cannot extrapolate the current low level of yields forever.

By contrast, the MMT proposal is based upon the premise that monetary policy is weak, and is to be taken out of the picture permanently. With rates locked at 0% by statute, there is no "yields will spike, leading to a fiscal death spiral" story to sell.

Yield curve control is in an unhappy middle ground. It is an admission that lowering the policy rate does very little, but by leaving the alleged threat of an "independent" central bank driving the Treasury into bankruptcy in place, fiscal policy remains knee-capped. (I don't believe the stories that the Fed has the right to drive the Treasury into bankruptcy, but many fiscal conservatives do not let facts get in the way of their campfire scare stories. What matters is what the fiscal policymakers believe.)

Barring a miracle cure for COVID-19, the United States is drifting into a multi-year period of extremely depressed activity. There does not appear to be capacity to eradicate the virus, nor are older consumers or office workers willing to take meaningful health risks to benefit capitalism. Unless there is a magical transformation in the attitudes of the ruling elites, the fiscal policy response will remain reactive, and ineffectual. The Fed is the only entity in the United States that takes any responsibility for the effectiveness of policy, and so we should expect to see greater leaps in its policy framework.