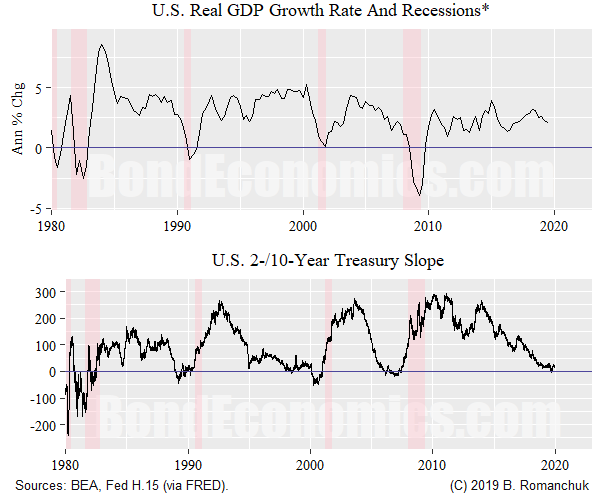 Although there are various attempts to downplay rate expectations as an explanation for bond yields. the reality is that they dominate any other attempt to generate a fair value estimate by using "fundamental data". (Since we cannot hope to explain every last wiggle of bond yields without having a largely content-free model, we need to look at fair value estimates.) The reasoning is rather straightforward: so long as the risk free curve slope is related to the state of the economy, bond yields are pinned down by the front of the curve, and the slope.

So long as we are looking at countries where the default risk is effectively nil (e.g., most modern developed countries outside the euro area), the 2-year is pretty much the average expected rate for the policy rate, modulo a relatively small term premium. Although various economists or strategists attempt to pretend rate expectations is a faulty theory, nobody actually trading the front of the curve would wildly disagree with the assessment that it is largely pinned down by the central bank, and what the central bank is expected to do in the near term.

So even if one wants to pretend that yield movements are largely driven by changes to term premia, what we actually observe -- the slope -- moves with prospects for growth. So that means we need to look at what bond market strategists already do -- what is happening to growth/inflation (and inflation is presumably linked to growth)?

Where this matters is when we want to look at other pet theories to explain bond yields, most notably fiscal variables.

Pretty well every attempt to find a dependence of yields on some explanatory variable runs into the issue that we lack a highly precise model for the yield curve slope (as otherwise, relative value trading would be trivial). Absent that model, isolating the effect of a change in the variables versus the changes in other variables that drive the slope -- and are likely correlated with the target variable -- is extremely difficult.

(The trigger for writing this note was running across a new article which has an estimate on the effect of fiscal deficits on growth. I might discuss it in a later article, but the previous logic explains why I have reservations about the topic.)