I just read the recent paper “An Inquiry Concerning Long-term U.S. Interest Rates Using Monthly Data” by Tanweer Akram and Huiquing Li.* The authors look at a wide spectrum of relatively simple models to pin down the explanatory factors for Treasury yields. They find that their techniques find an effect from fiscal variables, but short rates are a dominant factor. Although I am skeptical of the effect of fiscal variables on bond yields, the results in the paper largely matches what the data say to me.

The abstract of the Akram and Li paper states:

The first block of analysis looks at the relationships between five variables for the United States:

The various statistical tests rejected the possibility of no cointegration of variables, using a few models that allowed for possibilities such as regime shifts.

Of the most interest is the later work that attempts to estimate the sensitivity to the fiscal variable. The authors find:

The effect of a 1 percentage point increase in the ratio of fiscal balance to nominal GDP leads to a decline in the long-term interest rate that ranges from 11bps to 16bps.

These sensitivity estimates are lower than those produced in some other studies. The dominant driver for the level of yields is the level of short rates.

From a practical perspective, the estimated sensitivity is at the threshold of mattering from an economic perspective -- no matter what statistical tests one wants to invoke. Imagine that the government launches a decent-sized tax cut package that amounts to 3% of GDP. Even at the high end of the range, that raises long-term yields by 48 basis points. Unless the tax cuts were particularly designed to not have an impact on growth -- much like the Administration's were -- one would expect that the expected effect on growth would raise Treasury yields more than that. The thing is that one would normally think that higher expected growth rates would raise the expected path of interest rates -- which is moving in the same direction as the alleged fiscal effect. (This effect is what I was thinking about when writing an earlier article.)

Another issue to keep in mind that the study uses spot short rates, whereas what matters is rate expectations. If we believe that central bankers believe in something like a "neutral interest rate," rate expectations ought to have a mean-reverting tendency which will tend to be correlated with the fiscal deficit. That could easily explain the results without even using fiscal variables. 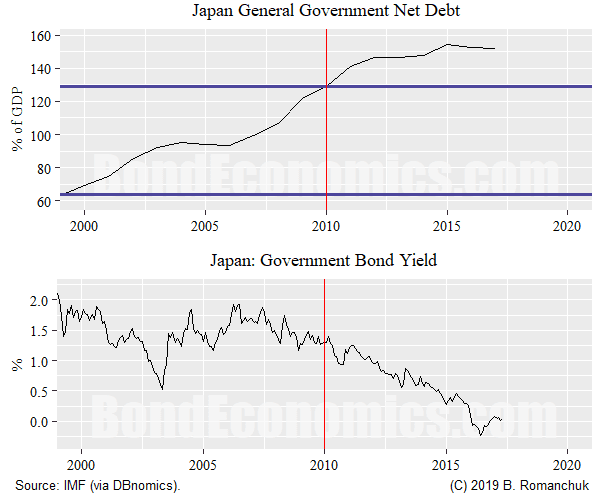 The chart above shows IMF data for Japan, starting in 1999. I picked the interval 1999-2010 to reduce the effects of BoJ shenanigans. We see that the bond yield series (which appears to match that of the 10-year JGB yield) mainly stuck to a 100 basis point range in 1999-2010. Meanwhile, the (general government) net debt-to-GDP marched from 64% to 129% (rounded), or a rise of 65%. Even a sensitivity of 1% of debt-to-GDP = 1 basis point seems implausible when we look at that chart. Other countries had central banks that moved interest rates more often, but the big jump in debt-to-GDP ratios was not matched by higher yields.

Researchers who insist that fiscal variables matter for bond yields need to come up with stories about magical "tipping points" where fiscal variables suddenly matter -- and those darned tipping points just never seem to have been hit by developed countries with floating currencies. If one wants to believe in such tipping points, or "bond vigilantes," feel free to do so, even though I find Santa Claus has a lot more empirical support.

If I were to attempt such a study, I would focus on trying to explain the 5-year rate, 5 years forward. This should help reduce the effect of spot short rates, and should be where any alleged fiscal effects would show up.

The Akram and Li paper offers a good starting point of the battery of statistical tests one might try applying to bond yields. The low sensitivity to fiscal variables is what one would expect purely based on eyeballing data, so one is probably stuck with using more complex models that cannot be fit to observed data,