Fed Nudge Not Telling Us Much (Yet) 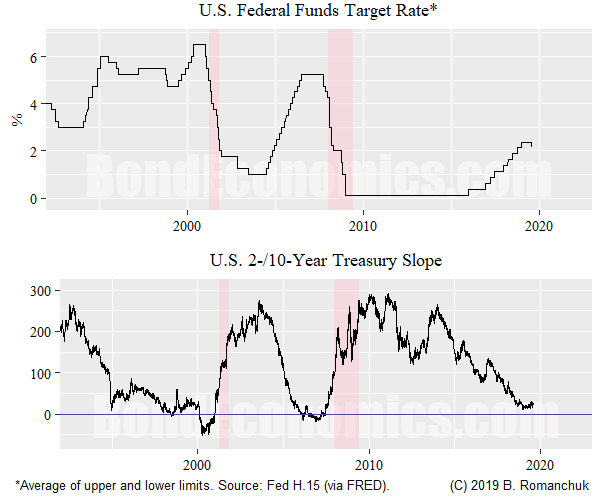 I am unconvinced that the rate cut yesterday offers us much information. It just cements the reality that the "neutral" nominal Fed Funds rate is pretty close to 2% (to what extent we believe in that concept). There is no tendency for the U.S. economy to accelerate: the various "automatic stabilisers" (both due to government policy as well as some tendencies in the private sector to push towards steady state) are so far able to deal with the various shocks that have hit the U.S. economy.

As the Fed statement notes, "global" factors are probably the main potential source for excitement in the U.S. economy. This includes trade war uncertainty, but probably more importantly, the difficulties faced by the European economies. The United Kingdom's self-inflicted wounds are well known and the euro area is trapped in a framework that is locking in sclerotic outcomes. (I recommend this recent article by Marshall Auerback that outlines the euro area situation. One of his interesting arguments is that the new ECB head -- Christine Lagarde -- may toe the establishment line too tightly if and when the euro area succumbs to recession.)

I am not following the data flow closely enough to offer any strong opinions, but it seems to me that the external linkages are the most worrisome aspect for the U.S. economic outlook. There are a number of unsustainable trends within the U.S. economy that might reverse in an ugly fashion when the recession hits, but it is unclear to me whether they are enough to precipitate problems on their own.

There is an association with the onset of rate cuts and recessions. However, the rationale for the latest rate cut is that it is a mid-cycle tweak that would allow the expansion to continue. The precedent for this is the mid-1990s cuts (as seen in the bottom panel of the above chart). The logic is that the small reduction of the drag from interest rates (to what extent it exists) will reduce the odds of recession.

(This is different from the 1998 rate cuts, which coincided with a small financial crisis -- LTCM -- and the Asian Crisis. Those were emergency cuts designed to reduce tensions in the financial markets.)

I am in the camp that such small moves have no measurable economic impact. Financial market commentators might be excited about this, but the reality is that they are desperate for material to fill column inches. It's a lot more fun to blame stock market movements on Fed mismanagement than nudges in various risk premia.

Possible rate cuts in the absence of a recession means that there is considerable two-way risk in rates, even in middle-of-the-road economic scenarios. I would argue that a flat curve is the natural outcome, with expected movements on a longer horizon (one year, say) to be mainly in the form of parallel shifts.

The evolution of the size of the Fed's balance sheet is largely a bit of market folklore. To what extent it matters, it is the psychological effect on believers in the Quantity Theory of Money. This is a subject in the domain of anthropology, not economics. 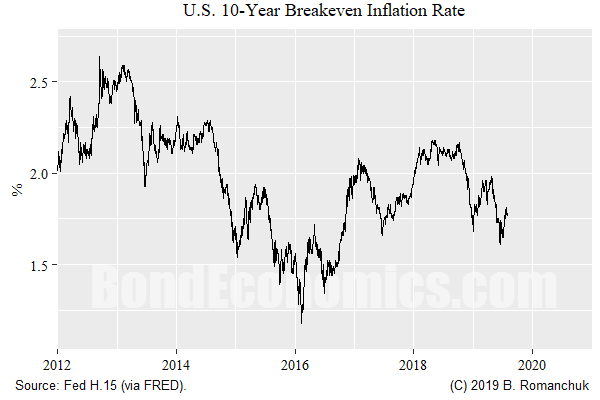 The usual campfire story used to scare bond bulls is a potential rise in inflation. As the 10-year breakeven inflation rate (link to primer) suggests, not too many market participants are buying that story. The cycle is long in the tooth, yet the breakeven rate is still stuck below 2%.

The market could be wrong, but my suspicion is that the main catalyst for a rise in CPI inflation would be tightness in oil markets. Although one can come up with a variety of stories to justify such an outcome, the effects on the U.S. economy would be mixed. It is very much unclear whether wages will rise to match the rise in CPI, and so the effect would be self-limiting (as seen in 2008).

A single rate cut is going to look like a bizarre decision in retrospect. For this reason, I suspect that there will be a bit of inertia behind at least one more cut, to make it look like there was some logic behind this week's move. After that, we are back to the waiting game, with most of the interesting developments probably happening outside of the United States.