Comments On The Inventory Cycle 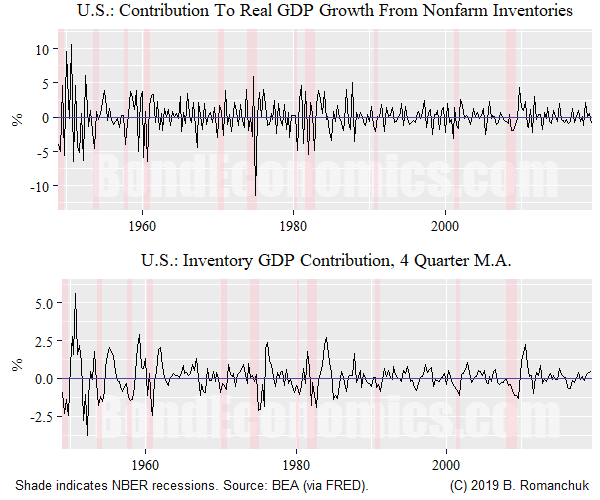 (Note: this article is based on some charts and thinking on inventories that is a section in my manuscript on recessions. I am not posting the full text, as I think it has too much background information, and probably needs some serious editing.)

The chart above shows the contribution to real GDP growth (on an annualised basis) for the United States. The top chart shows the raw quarterly series, while the bottom smooths out the noise by taking the four quarter moving average.

The top panel is probably too noisy to draw much useful information from, although it underlines the extent of the short-term swings in inventory. The bottom panel offers more information, as we see the extended inventory drawdowns that are associated with recessions.

By eyeballing the bottom panel, we can see that inventories swing around less in the post-1990 era (the so-called "Great Moderation"), but one may note that the swings in 2008 were comparable to that seen in earlier recessions. That is, modern management techniques have not eliminated the inventory cycle.

The standard way of analysing inventories with stock-flow consistent modelling is to assume that firms have a target inventory-sales ratio. Such a behavioral rule generates an accelerator effect for growth.

For example, let us assume that a firm has a target inventory-sales ratio of 1, with sales being monthly. That is, the target is to have one month's of expected sales in inventory.* We also assume that there are no seasonal effects, and the firm extrapolates the previous month's growth going forward. As noted below, these assumptions are too simplistic and probably generate too large an inventory cycle, but I want to keep the numbers simple.

At the initial time period, the firm had sales of 100 units in the previous month, and 100 units in inventory. The month before, sales were 99 units, so the extrapolated sales figure for the current month is 101 units.

In order to remain on the target for the inventory-sales ratio, the firm has to grow inventories to 101 units. This means that total production is 102 units: 101 units to meet expected sales, plus 1 unit to grow inventories. As can be seen, if firms expect real growth, production has to grow by more than sales, as inventories will grow in line with sales. This generates profits via the Kalecki Profit Equation (link to primer).

What happens if reality does not meet expectations?


The behavioral rule of always returning the expected inventory-sales ratio to target in the next period is probably too strong: it generates quite unstable behavior (as seen with my example numbers). Real world economies do not see such wildly unstable inventory management behavior, and so the models need to have a more relaxed rule where the inventory-sales ratio will only tend towards its target level gradually. 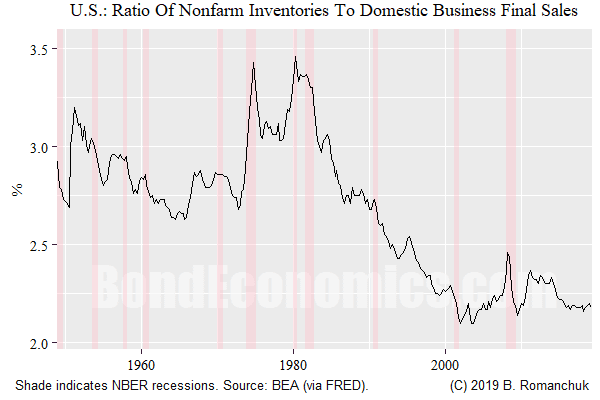 The chart above shows one measure of aggregate inventory-sales data. It certainly fits a story of a decrease in the size of inventories in the post-1980 period -- which is when just-in-time inventory management got entrenched.

If one looked at the 1980-2000 period, we see no tendency for the inventory-sales ratio to revert to any level, which raises questions about the assumptions in post-Keynesian stock-flow consistent models.

However, I am extremely uncomfortable with this data series; it could be misleading for any number of reasons. For example, the market value of inventories can bear no resemblance to their balance sheet carrying value, courtesy of last-in, first-out (LIFO) accounting. (The textbook The Analysis and Use of Financial Statements by White, Sondhi, and Fried cites the example of firms liquidating inventories with valuations from World War II in the 1980-1 recession. Although that sounds crazy, one must remember that things like different deliveries of oil get mixed in the same tanks.) 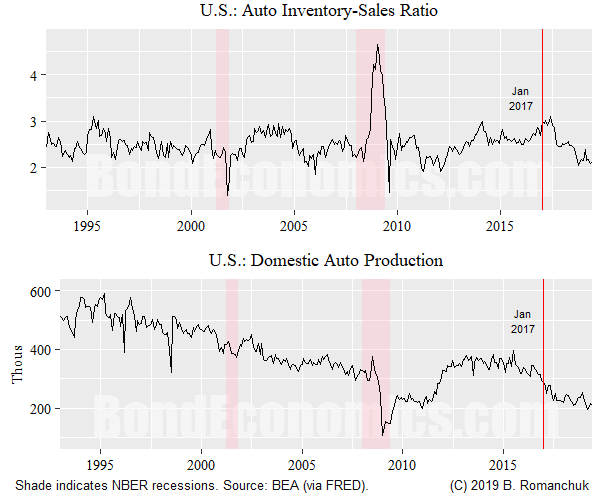 I am more comfortable with some data series that have shorter time histories, like the auto inventory data above. If we exclude the periods around recessions, we do see a tendency for auto inventories to stick between 2 and 3 months worth of sales in the post-1993 period.

If we focus on recent data, I highlighted the somewhat arbitrary month of January 2017. (The inventory-sales ratio hit 3 on that month, if we round off.) We see that auto production was falling (bottom panel) as inventories rose towards the magic "3 months" level. However, the production reductions have finally lightened up inventories, and so recent data is closer to 2 months of sales. As a result, one cannot point to the auto inventory cycle as a major source of recession risk at present.

Since different industries behave differently, we need to dis-aggregate data. However, even if there is a slowdown in one industry -- such as auto production since 2016 -- that may not be enough to induce a recession. The shrinking share of manufacturing employment implies that trends in manufacturing has less ripple effects on demand.

If one is concerned about current conditions, I have not looked at enough of the data to offer strong recommendations either way. All I can point out is that one of the main cyclical sectors -- autos -- has already gone through a mini-correction.

For those of us who are fans of neoclassical/post-Keynesian mud-slinging, the possibility of a target inventory-sales ratio is a wonderful topic. Although there are arguments that post-Keynesian models ignore expectations, this is not true: model firms need to have a notion of expected sales in order to set target production levels.

The first thing to note that an inventory-sales ratio target is an example of a firm following convention, and not blindly optimising something or other. This is not supposed to happen, argue neoclassical models.

The next thing is that the possibility of an inventory cycle does not appear in standard neoclassical macro models. Firms magically produce exactly the right amount of goods in every period, and/or they sell it forward. (Please note that there are some neoclassical inventory models, but they appear to only be microeconomic models, and not integrated macro models.)

Finally, the argument that inventories are used to absorb forecast mistakes means that the exact process for producing forecasts is much less important than neoclassical propaganda would suggest. If a firm makes systematically incorrect forecasts about sales, its inventories will be moving away from target. Just restoring inventories to their target levels will result in behavior that is indistinguishable from more accurate forecasting methods.

* One may note that the inventory-sales ratio is a ratio of a stock variable (inventory) and a flow (sales). It technically has a unit of the inverse of time. Although there are admonitions to not mix up stocks and flows, the stock-flow consistent modelling tradition argues that actors have targets for these ratios in their behavioral functions. These are referred to as "stock-flow norms."