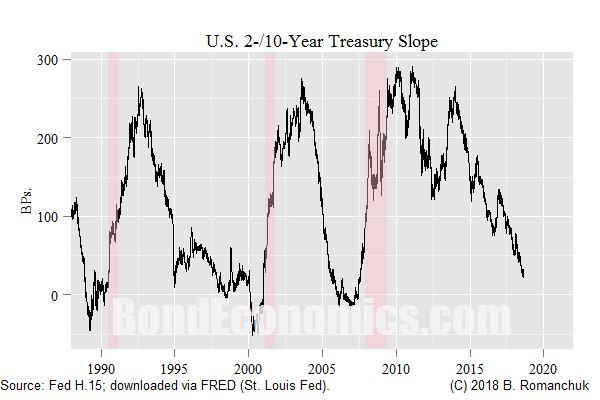 This article briefly runs through some indicator charts for the current situation in the United States. They seem consistent with a fairly bland outlook. Although the yield curve flattening (above) attracts some attention, I am unsure it is telling us very much, as I discussed earlier. In order to generate more excitement, we need to either talk up an inflation story, or find some reason to believe a recession is immanent. 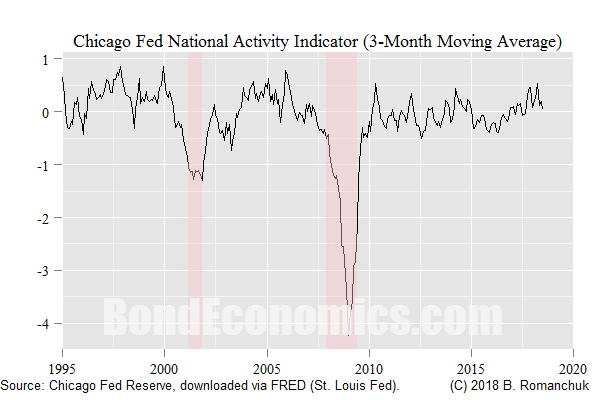 I will start with the Chicago Fed National Activity Index (the 3-month moving average is shown above). (This primer discussed this index.) One can always debate the construction of aggregate indicators like the National Activity Index, but they at least avoid the risk of cherry-picked data to fit a pre-determined analytical agenda. With the indicator near zero (where it has been oscillating around since the end of the recession), there is no obvious bias to released economic data. 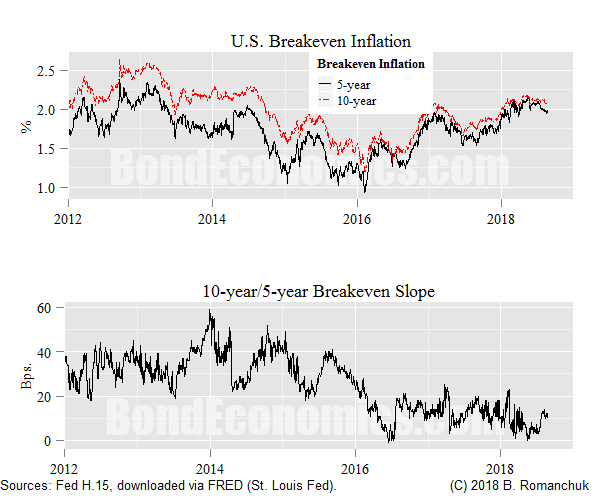 I have not been delving into inflation data, and so I do not have any particular axe to grind with respect to inflation scare stories. Breakeven inflation rates in the United States (link to primer) has risen relative to 2017, but is stuck around 2% (chart above, top panel). Given that CPI inflation normally runs higher than rate of change of the the Personal Consumption Expenditure (PCE) deflator, one can argue that the markets are discounting the Fed continuing to miss its target to the downside for the foreseeable future (matching its track record of the past decade). One could argue that this the result of some mysterious inflation term premium, or just raw complacency. Admittedly, the slope from the 5- to 10-year breakeven inflation rate is fairly flat (bottom panel), so saying that there appears to be no risk premium is plausible.

From a central bank watching perspective, one could argue that this is not an argument against Fed rate hikes. The story is about expectations: inflation expectations are stable, because the Fed's commitment to inflation stability is credible. There are good theoretical reasons for such a belief, but it is very hard to turn this into a testable theory. Until there are some serious shocks to the inflation process, this is largely a question of personal belief. 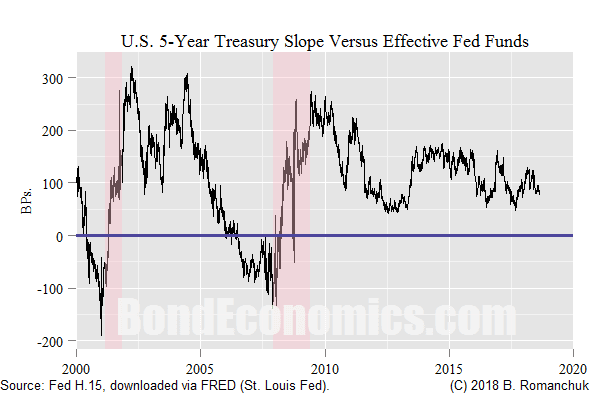 The chart above is an alternative way of looking at the dynamics of the flat curve. It depicts the slope from the Fed Funds rate (I use the effective rate, since the way the target is defined changed) to the 5-year Treasury. With a slope of less than 100 basis points, the 5-year is just not giving the hawks respect. If the Fed wanted a steeper curve, it cannot do too much about this. The years of bloviation about inflation risks and unsustainably low interest rates from heads of certain Fed Reserve banks in the southern United States has made the bond market somewhat jawboning-proof. If the Fed wants the 5-year higher, they need to hike rates more rapidly -- which actually might flatten the long end of the yield curve. Otherwise, there will need to be signs of an acceleration in growth. 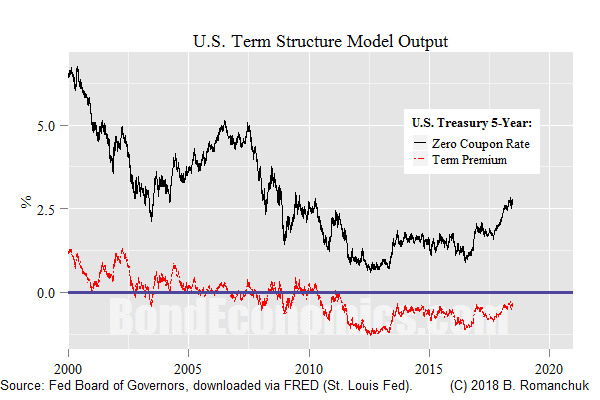 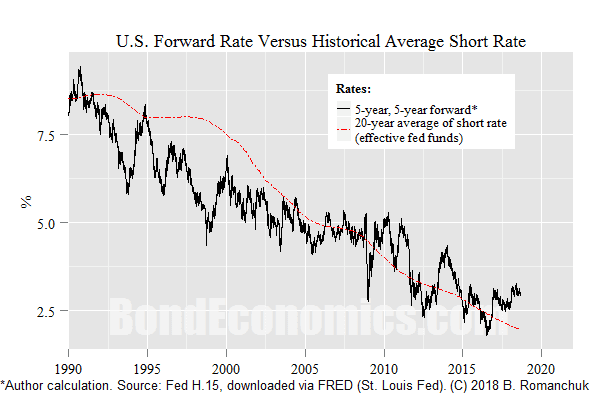 The chart above shows the valuation story the Fed is fighting against. The solid line depicts the 5-year rate, 5-years forward -- which presumably should track against some estimate of fair value (or "neutral rate," whatever that means), since we assume that we cannot predict the state of the cycle five years ahead with that much accuracy. The dashed line is the average of the realised short rate, over a long interval (20 years). Under some heroic assumptions that we have been cycling around some steady state level of rates and growth, that average should converge to a "neutral rate." As can be seen, the forward is well above that estimate of "neutral."

In summary, bond markets are consistent with a continued status quo: a pussy-footing Fed, and non-inflationary steady growth. Sooner or later, extrapolating past trends will fail, but I am not in a position to guess when that will be.