The Limited Role Of Currency In Government Finance 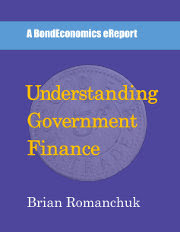 There is a tendency to associate currency (in North America, dollar bills and coins) with the concept of "money." This is somewhat unfortunate, as currency is of limited importance for most developed countries, at least outside of the underground economy.

Since the underground economy consists of activity that is precisely aimed to avoid interference by government (laws, taxes), it has limited effect on government finance under most circumstances. This article contains an excerpt from my eReport Understanding Government Finance. It explains how currency interacts with the rest of the financial system, based on what I refer to as the Simplified Framework of Government Finance (discussed in an earlier article). The Simplified Framework is based on the Canadian system of government finance, with a few simplifications.

To briefly recapitulate the Simplified Framework, it is a system in which bank reserves do not exist. Since bank reserves have not yet been abolished in the United States, and most economic textbook writers are American, too much emphasis is placed upon the role of bank reserves in most descriptions of the financial system. Moreover, the "monetary base" consists of the sum of currency outstanding and bank reserves, which leads some analysts to treat bank reserves as somehow being interchangeable with currency. The beauty of eliminating bank reserves from the analytical framework is that such confusion is essentially impossible.

The key assumption of the Simplified Framework is that in the absence of bank reserves, all net transactions at the end of the day between the government and the banking sector have to be settled with a transfer of government bills and bonds (since those are the only instruments that appear on the central bank's balance sheet at the end of the day). This assumption colours our analysis of the role of currency within the system.

During the day, banks could have non-zero settlement balances, but those balances have to be netted out to zero by the close. Yes, the situation is slightly more complicated in the actual Canadian banking system, and those complications are addressed later in Understanding Government Finance. However, it is best to understand a simpler framework before attempting to deal with every possible complication that has been embedded within financial systems. 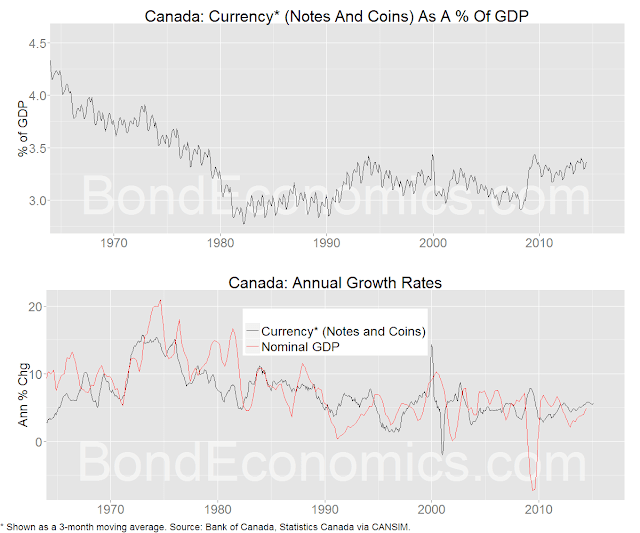 The chart above illustrates the evolution of currency outstanding over time. Currency holdings decreased from over 4% of GDP in the 1960s to a value that has oscillated between 3% and 3.5% of GDP in recent decades. I have smoothed the currency series by averaging it over 3 months , as there are periodic spikes around December (reflecting higher holiday retail activity). Despite being smoothed in this fashion, the series still has a seasonal ripple.

The bottom panel shows the growth rates for nominal GDP (Gross Domestic Product including the effect of inflation) and currency growth. There is obviously a slight relationship (as the ratio of the two series is stable), but there is little direct correspondence in the growth rates on a year-to-year basis. This type of behaviour is termed a stock-flow norm, as it appears that households want to keep their stock of currency holdings stable relative to the flow of their nominal incomes, but it may drift around this target ratio in response to events.

The operations involving currency are straightforward. Although it is possible for citizens to pay taxes with currency directly, this appears to be an unusual occurrence. Modern Monetary Theory authors enjoy pointing out that when this is done in the United States, the government gives the taxpayer a receipt and then destroys the bills received.[*]  This also provides an example of Chartalist principles: money has value to the citizen in that it they can use it to remove a tax liability, but it has no real value to the issuing government.

Otherwise, transactions between the government and the banking sector involving cash revolve around the management of vault cash. Banks hold a certain amount of cash “in their vaults” and their automated teller machine network. Households typically withdraw currency from banks, which is then largely returned via retailers. Each private bank will have a circular flow of currency every day.

Eventually, banks need to restock their vaults. To do so, they will need to buy currency from the central bank (as Canadian and most other private banks cannot issue their own banknotes). Within my simplified system of governmental finance, the bank would first incur a drawdown in its settlement balance with the central bank, which would need to be settled by selling some government securities to the central bank by the end of the day (assuming that the private bank did not have an inflow into its settlement balance from other transactions).

This means that we can visualise the transaction as a trade of government bonds/bills for currency.
Where does the central bank get the currency? It prints it (although it presumably has some stockpiles waiting its vaults.) The newly printed money is a new liability for the Bank of Canada, matched by new assets–the bonds and bills it bought. (The balance sheet amounts have to match, as the market value of the bonds will equal the value of the currency purchased. These market values may bear limited resemblance to the face value of the bonds.)

Although I often see worries about governments “printing money,” it is an extremely innocuous operation within this framework. It is an exchange of interest-bearing government bonds for currency–which pays no interest–at the behest of the private sector. The government’s role is purely passive; it only “prints on demand.”

The other side of this operation–private banks exchanging currency for bonds–is rarer as the stock of money follows an upward trend line, but it does happen when the demand for currency subsides in the new year.

These operations are generally of interest only for logistical purposes within the banking and retailing system. There is normally only a limited effect on government finances; the only effect is the amount of “seigneurage revenue,” and that tends to be stable over time. (Seigneurage is the profit earned by the central bank by the fact that currency notes do not pay interest, while the central bank earns interest on its assets. More generally, the government earns a notional “profit” by replacing inter-paying debt with money. Seigneurage is also spelled “seigniorage” or even “seignorage.”)

This used to be a topic of only academic interest until various European central banks set their policy rates to slightly negative levels. The open question is how much further they can lower interest rates until the private sector starts making large currency withdrawals, and stockpiling the cash.

My view is that these policies are crazy, and I hope that they will be abandoned soon. If negative rates are sustained, the technical details of how currency is handled could become quite important. Will it be possible for investors to withdraw large amounts of currency and store them safely? If this turns out to be infeasible, currency is not really an alternative for the entities that determine the pricing of government bonds. (There is an additional consideration that there are other mechanisms to achieve a 0% rate of return on investment, such as exercising your right to prepay taxes. These alternative means of insuring a 0% return on investment may prove to be a viable mechanism for the private sector to avoid negative interest rates.)

In summary, although negative interest rates are achievable, currency and other institutional factors will probably prevent interest rates from getting much more negative than -1% or so.

Note: In a later article, I will turn to the more significant question of transactions between the private sector and the government which does not involve currency.

* For example, Warren Mosler observes in Seven Deadly Innocent Frauds of Economic Policy: “And what happens if you were to go to your local IRS office to pay your taxes with actual cash? First, you would hand over your pile of currency to the person on duty as payment. Next, he’d count it, give you a receipt, and hopefully, a thank you for helping to pay for social security, interest on the national debt, and the Iraq war. Then, after you, the tax payer, left the room, he’d take that hard-earned cash you just forked over and throw it in a shredder.”