Nathan Tankus recently published an article entitled "No, Inflation Doesn’t Erode the Burden of Debts" (h/t Tom Hickey at Mike Norman Economics). Nathan correctly diagnoses that mainstream economists (he cites Paul Krugman) routinely jump between the concepts of "inflation" and "CPI inflation" (Consumer Price Index), and that a rise in the level of the CPI does not help out borrowers. What matters is wage inflation. I have made the same complaint myself. However, the mainstream logic is not exactly incorrect, it is just based on an embedded assumption about the long term. This seems to be done for reasons of politics, or more accurately, attempting to hide politics from economics.


The source of the confusion here is that it is popular do divide key economic variables by abstract measures of the prices across the economy (such as the Consumer Price Index). This makes sense sometimes but in other situations become nonsensical. Debt is one such example. In the United States most people have debts denominated in U.S. Dollars. A useful proxy for the burden of debt is the ratio between an individual’s or sector’s nominal debt to its nominal income.
The burden of this debt falls when they can refinance at a lower nominal interest rate, their nominal income rises or they default.

In other words, a household is not helped in paying its mortgage if the price it pays for groceries rises. But it will be easier to make mortgage payments if the household's wage increases. (For governments, taxes are levied on nominal activity, and so government revenue will typically rise even if just consumer prices rise. For government finance, what usually matters is nominal GDP growth, which is enhanced by a rising GDP deflator.)

He also predicts the response that I give.


Some will object that Krugman and many others are simply using increases in the price level as a proxy for increasing nominal income. The problem with this is that they never connect their arguments about inflation to income levels.

Yes, economists who argue that "inflation" reduces the burden of debt are using consumer price inflation as a proxy for "generalised inflation" (which I describe below). This is technically incorrect. But as the chart below shows, there's a fairly strong correlation between CPI inflation and wage inflation, for very good reasons. A divergence between the two has implications for the wage and profit shares of national income. 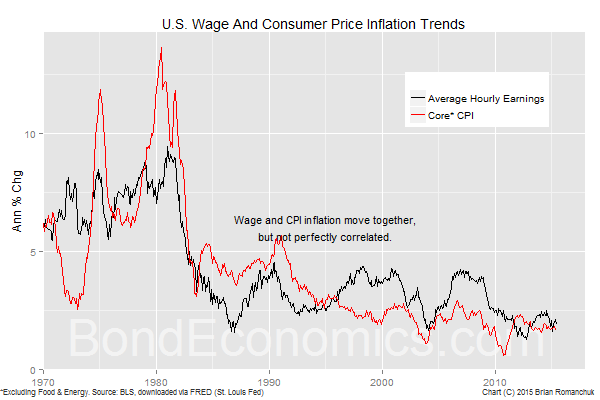 Why do many economists interchange "generalised inflation" and consumer price inflation? My guess is that they have inherited this quirk from central banks. Central bankers do not wish to say that they do not want wages to rise, rather they focus on the politically popular fight against rising consumer prices. Since central banks drive the research agenda in macroeconomics, their political obsessions are picked up by academic economists. (Additionally, many mainstream economists would argue that the two measures cannot diverge, since prices and wages are linked by marginal productivity. This gives a theoretical basis for treating the two concepts as being interchangeable. As some form of post-Keynesian, I question such marginal analysis.)


Any statement in economics that X causes Y carries an implicit ceteris paribus assumption. The question then is what exactly are we assuming is constant. In this case, are we assuming nominal wages or real wages are unchanged? I think most economists would take it as read, when talking about inflation (even CPI inflation) that it is real wages that we are assuming are constant. Tankus obviously reads it the other way.

This is probably the best explanation of why this shorthand is used. I did not think of it when I wrote this article, since I (like Tankus) would not assume that real wages are constant when the level of consumer prices changes. Wages are generally not indexed any more, and so nominal wages no longer follow movements in the CPI.

In summary, Nathan Tankus is correct that mainstream economists are sloppy when they interchange "consumer price inflation" and "generalised inflation." That said, this shorthand is broadly correct in the medium term. Although I am critical of mainstream economics, I see little value in quibbling over a point in which I basically agree with. The rest of the article gives an explanation of why the two notions of inflation are linked.

In order to explain the concept of "generalised inflation," I will revert to discussing a highly simplified two sector economy -- one with just a business sector and the household sector -- which is further subdivided into workers and firm owners. (If you wish to avoid class conflict overtones, feel free to pretend that the workers and firm owners are the same households.)

Firstly, we assume the economy is in a steady state. There are 90 workers, and they produce 100 units of goods every day. The daily wage is $1, and the units of goods are sold for $1. The total wage bill is $90, and we assume that workers spend all of their income. This means that they purchase 90 units of goods. The remaining 10 units are purchased by firm owners. The total revenue for the business sector is $100, which means that profits are $10. This $10 dollar profit is paid out to capitalists, which allows them to finance their purchases.

What happens if prices changes (if we assume the economy enters a new steady state)? I look at three generic cases.

In other words, the differential between consumer price and wage inflation just tells us about the distribution of incomes within the economy. Since mainstream macro is highly allergic to the concept of income distributions for political reasons, this is obscured in conventional textbook descriptions of the inflation process.

If we start looking at real-world data instead of simplified models, we need to start adjusting the logic for worker productivity. If the amount of output per worker rises over time, wages would need to rise by that amount in order to keep the profit share of income stable. For example, this would allow the consumer price level to be constant while wages rise.

The rise in the profit share of national income over recent decades demonstrates that wage and consumer prices can diverge. But there are limits to the process.
In summary, it is technically incorrect that consumer price inflation translates exactly into generalised inflation. But at the same time, the two measures are going to be relatively close to each other in the medium term, so people can get away with blurring the two concepts.