The Simplified Framework Of Government Finance

In order to understand how government finances work, we need to strip out cosmetic details to find the underlying principles. Within this this article, I outline the "Simplified Framework" of government finance, which (roughly) corresponds to modern Canadian practice. Once the implications of this framework are understood, complications (such as bank reserves) can later be added. This is an excerpt from the eReport Understanding Government Finance.


The accounting and financial transactions of real world governments is a complex topic. However, in order to analyse a complex system, we have to make simplifications. I will now outline what I view is the simplest, yet realistic framework for government finance, which I will refer to as the Simplified Framework. Once we understand monetary operations within this framework, we can add new features to capture dynamics that were previously not modelled.

The model I am proposing is a cut down version of the framework that is currently being followed by the Federal Government of Canada. The United States model is quite different as the result of the use of bank reserves, discussed in Section 5.2. Other countries have removed mandatory reserves like Canada, but there can be small differences in procedures relative to the Simplified Framework.

The key simplification is that the notion of “reserves” has been abolished from the banking system. The only “money” used in Canadian government finance is currency–notes and coins–which have very limited impact upon the economy (other than the role that they play with regard to the zero lower bound for interest rates, as discussed in Section 4.2). This allows us to dispense with the discussions of the nature of money that tend to dominate other approaches to monetary economics. Nevertheless, once we understand this simplified “no reserves” model, we can bolt on reserves to see what they accomplish (in summary: very little). This is discussed in Chapter 5.

Within the Simplified Framework, the central bank balance sheet is described as follows.

In order for the central bank to keep this liability structure, private banks would have to ensure that their settlement balance at the central bank is always exactly zero at the end of the day. 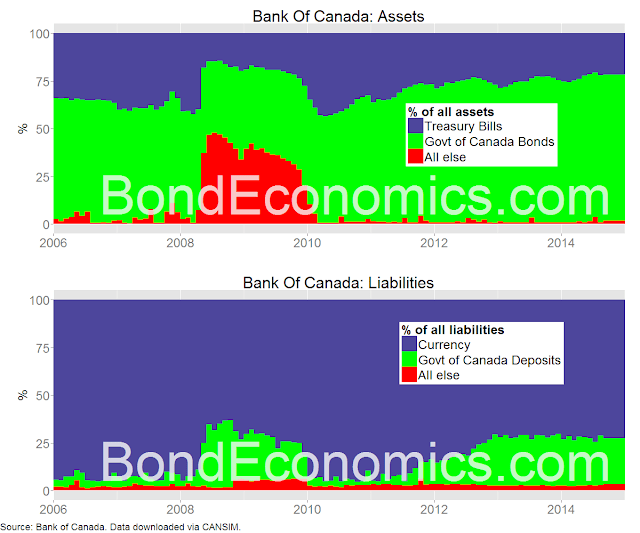 The chart above shows the evolution of the assets and liabilities on the balance sheet for the Bank of Canada since 2006. The structure is close to the Simplified Framework (outside of the period around the Financial Crisis). There are some small deviations from the assumed structure; they are the small components we see at the bottom of the two panels. The Simplified Framework forces those deviations to be zero.

The Federal Government of Canada also follows one practice that I am ignoring for now–the Ministry of Finance lends money from its balance at the central bank to private banks in auctions. I discuss this in Section 5.3.

(This report is available at the retailers listed here.)