The First Fed Rate Hike Is Not The Issue, The Followup Is

The July Employment Situation report for the United States followed the mediocre trend of previous releases. This gives the Fed cover for a rate hike at some point in 2015. Although I believe that there is no need to restrain the U.S. economy (particularly when the rest of the world looks like it is rolling over into recession), I see the logic behind hiking rates this year. For the bond market, the real question is whether there any hike will be followed up by further hikes. People who believe that long-term bond yields will rise one-for-one with the policy rate may be surprised by bond market's lack of reaction. We could end up with a silly "conundrum" debate, just like the last cycle. 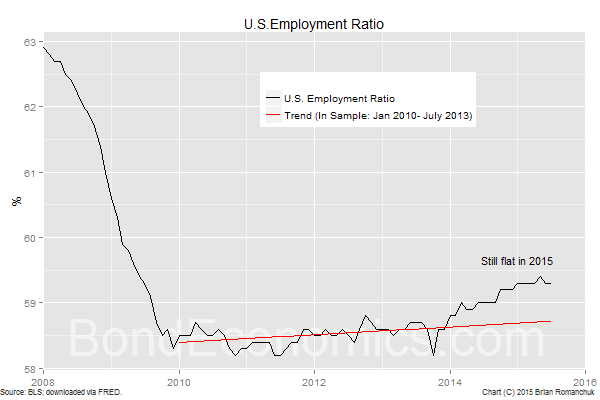 The employment-to-working age population ratio was unchanged at 59.3% again in July, leaving the ratio unchanged since January 2015. This measure covers the whole population, which obscures a change in the mix at different age cohorts. The lack of wage growth is not particularly puzzling, as the U.S. economy is just creating jobs in line with population growth. Despite negative real policy rates, which are supposed to be stimulative, there is no sign whatsoever of accelerating economic growth.

A rate hike in this environment is entirely discretionary. My feeling is that the Fed would be happy to get the nominal policy rate away from 0%, which would slow down some of the loony commentary about monetary policy. Additionally, it creates room to cut rates when the next recession hits. (The rest of the globe may be in recession or close to it, but the U.S. economy still seems to be on a shallow growth path.)

The issue for the bond market is when the policy rate will be higher than 2% (if the Fed even gets there before the economy succumbs to recession). Since the first rate hike has been so easily postponed, it is unclear why the Fed will not take a lengthy pause at round levels like 1%. The U.S. dollar has been soaring versus its developed market counterparts, and so the external sector is providing restraint for growth. 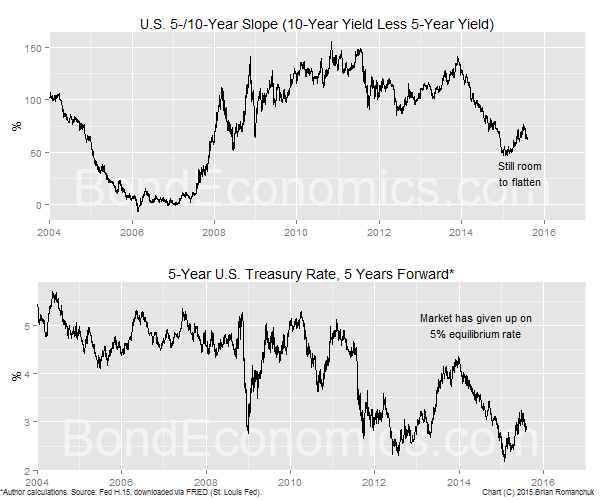 The usual assumption is that the bond market would be crushed by rate hikes. This was the historical pattern during earlier cycles, and the tendency is to extrapolate those experiences. Although the short end of the yield curve is vulnerable, the long end is priced for a mild tightening cycle. The top panel of chart above shows the 5-/10-year slope; it has flattened already, but it still can flatten by another 60 basis points while the rate hike cycle unfolds. Since there is no particular reason for the 10-year point on the curve to have much of a term premium versus the 5-year point, that slope should be near zero at the top of the cycle. This tendency to flatten will act to cushion the long end from the effect of rate hikes. (The higher carry of longer-term bonds allows yields to rise by a very slight amount without losing money. This carry effect was very significant back when the 10-year yield was near 4%, it is much less the case now.)

The reality that the policy rate has been essentially zero for about half a decade has finally worked its way into market pricing. My approximation of the 5-year rate, 5 years forward (bottom panel) has dropped to near 3% from the 5% level it had been at up until 2010. Unless the Fed starts hiking by 50 basis points a meeting, it will take considerable time for the 3% level to be threatened by short rates. Therefore, there is no particular reason for those longer term forwards to be significantly revised higher just because the Fed hikes by 25 basis points in September (or December, or ...).

In summary, it should not be surprising that the 10-year yield will shoot up to at least 2.5% if and when the Fed hikes rates. This will provoke considerable excitement in the business press, and "I told you so!" comments by bond perma-bears. But once that initial surge has passed, the market would revert to rather boring range-trading around a slowly rising trend. In particular, analysts who use fair value models based on a regression of 10-year yields versus the Fed Funds rate (with a regression beta around 1), may be shocked by the lack of movement in the long end relative to the policy rate.

Bonds might underperform cash (or equivalently, short duration strategies outperform), but it will be a game of inches, not a fixed income apocalypse.