Has The Bond Market Been All Wrong on Inflation?

Daniel Kruger had a recent article at Bloomberg "Bond Markets Got It All Wrong When It Comes to Biggest Foe." Although it is entertaining to point out market inefficiencies, this particular analysis is not particularly fair. And in particular, the short life of the TIPS market (U.S. inflation-linked bonds) means that we cannot say too much about the market's track record.

No, Inflation Is Not The Biggest Foe Of Bond Investors

The belief that inflation is the biggest enemy of bond investors is a cliché that is beloved by newspaper editors and economics professors. It is also wrong --  losing money is the biggest enemy of bond investors. It may have been true when widows and orphans have been the price setter in the bond market, but we have not had such a market environment for a very long time (if it ever was the case).

A popular way of explaining the incorrect belief is to say that bond investors "lose money" if the rate of inflation is greater than the bond yield. Funnily enough, it is only bond investors that "lose money" due to inflation, and not equity investors. But this does not take into account how bond pricing is set. If I (a Canadian) buy U.S. Treasurys, I could care less whether American citizens have to pay more for ground beef than last year. Furthermore, if I am levered 10:1, the running yield on a bond tells us almost nothing about the nominal rate of return I will achieve.


Has The TIPS Market Been Steadily Wrong?

On short-term horizons (one year, say), headline inflation is largely by the gyrations of oil prices. Short-term inflation breakevens (primer here) just tell us what TIPS traders think oil is going to do in the near run. They are probably just as successful as any other commodity forecaster. We need to look at longer maturities in order to isolate what is happening in domestic inflation. 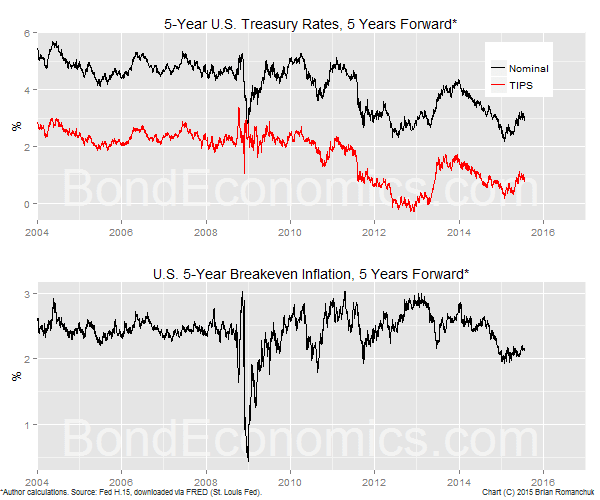 The best way of removing the effect of oil prices is to look at forward breakeven inflation rates, for example, the 5-year breakeven starting 5 years forward which is pictured above. Since there is no good reason to predict an oil price spike starting exactly 5 years from now, the forward breakeven represents a long-term average value.

By way of background, you get a 5-year rate, 5-years forward rate if you create a security package which consists of:

Selling the 5-year bond short eliminates the effect of interest rates over the first 5 years of the package. You then end up with a unhedged long exposure after 5 years (which is what you wanted). You are exposed to market value changes for the first five years as the implicit forward rate changes. (I do not have a primer on forwards yet, but I introduce the calculations in Appendix A.1 of my eReport.)

In order to see whether a 5-year forward rate is too high or low relative to realised inflation requires waiting 10 years (when the long leg of the package matures). Unfortunately, the TIPS market has not been around for too long (first issuance in 1997). Compounding the problem is the fact that Fed H.15 series that I use are only available starting in 2004, and so I have almost no history of the breakeven market's forecasting prowess. 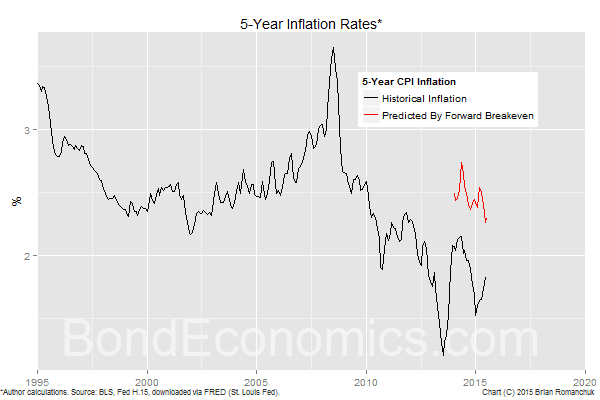 The black line shows the 5-year annualised inflation rate (all items, or headline) for the United States. For example, the latest figure is for June 2015, where the annualised inflation rate is about 1.8%. That is, for the period June 2010 - June 2015. Since this covers the post-crisis period, it is not surprisingly below the averages seen earlier.

Meanwhile, the predicted value -- which equals the 5-year, 5-year breakeven from June 2005 -- was above 2%. It is hardly surprising that the bond market did not predict the weakness of the post-2010 period in 2005.

If we had a longer run of history, we could see how well the breakeven market's predictions are on average. (I did this style of analysis for nominal Treasurys in this earlier article on the term premium.) But since the earliest possible start date for analysis would be for inflation averages ending in 2007, and so we are still stuck at mainly looking at post-crisis behaviour.

As for the Bloomberg analysis, it is unclear what the author was doing. It does not look like he we comparing the forward rate to the subsequent 5-year realised inflation rates, which is the only way to analyse the accuracy of the forecasts. (You could look at shorter analysis horizons, but you are then measuring whether the market is accurately forecasting market rates, and not inflation. For example, if you used a one-year analysis horizon, you would be measuring whether the 5-year forward is correctly predicting the 4-year forward. This is bread and butter relative value analysis, but it is not driven by inflation fundamentals.)

In order to get an idea about market forecasting accuracy, you would need to look at inflation-linked markets with a longer history. The best candidate would be the United Kingdom, or possibly Australia. (Canada has had inflation-linked bonds since the early 1990s, but none of the them have yet matured. Therefore, we cannot gauge their forecasting accuracy over the lifetime of the bond.)

Although I adhere to a very weak version of market efficiency with respect to bond markets ("rates expectations theory"), I do not think breakeven traders are going to forecast headline inflation over the short term with any degree of accuracy. If they could, they could make more money trading oil futures. Over the longer term, it seems reasonable to expect that there will be the equivalent to term premia in breakeven inflation. This means that long-term breakeven inflation has a small upward bias relative to what would be the best unbiased forecast available. (I will discuss why I believe this in followup articles.)

Nevertheless, the current levels of forward inflation breakevens do not appear particularly attractive. to be over-predicting future inflation. [UPDATE: Since I was not thinking about a trade recommendation, my initial wording was backwards from what I meant to write.] Buying and holding bonds works out on average due to the term premium (which bond perma-bears keep rediscovering the hard way). But at the same time, bond bear markets do occur, so you cannot rely on a term premium to bail you out.