In the chart below, I show the behaviour of the realised (historical) excess returns for the 5-year Treasury. 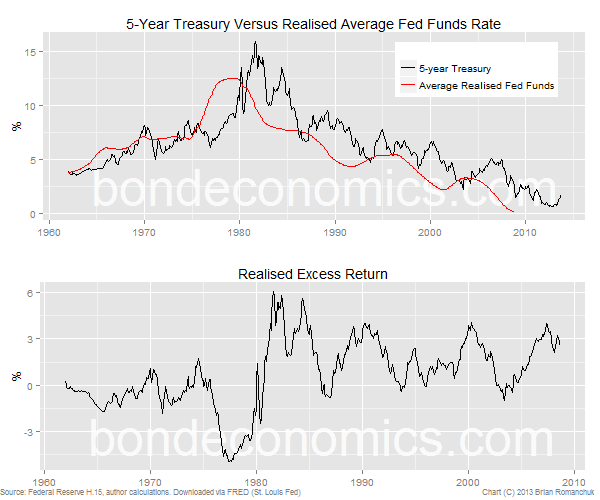 To explain the chart, in the top panel we see the 5-year Treasury yield versus the 5-year average of the effective Fed Funds rate for the following 5 years. Since FRED does not yet have a time machine option, the data for the average ends in 2008 (i.e., 5 years ago).

In the bottom panel, the “Realised Excess Return” is the 5-year bond yield minus the average fed funds rate depicted above. This is a fairly good approximation of the excess return of a buy-and-hold position in a 5-year bond entered into a particular date versus a cash investment.

The table below shows the average realised excess returns for various periods, for the 2-, 5-, and 10-year points on the Treasury Curve. (Charts for the 2-year and 10-year are at the bottom of this post.)

The experience for the 5-year maturity is particularly interesting. The negative premia pre-1980 could be explained by the various regulations that led to “financial repression”: yields held below what market forces would suggest. Once the deregulation of interest rates was completed, the premium has not been significantly been negative. Although the disinflation post-1980 was a surprise, the disinflation was largely finished by 1990. The market did not catch on to this, and the 5-year yield was on average 1.74% above the realised fed funds rate since 1990. In my opinion, the historical premium appears outsized for the amount of price risk associated with a 5-year bond; for example it is about double 5-year investment grade spreads right now (using the CDX index). Such a persistent miss by the market is hard to explain if it is in fact efficient.

This makes it hard to calibrate a model for calculating the “true” expected path of interest rates after adjusting for a term premium. If we blindly applied the post-1990 premium to the current curve, the implied expected average fed funds rate over the next 5 years is around -0.25%. This does not appear very plausible.

This also messes up any models for the fair value of bond yields which are based on historical data. In the post-1990s sample, the whole bond curve exhibited a very large term premium (or else market forecasts were consistently terrible). Therefore you end up basing your model target upon a too-high yield. I believe that this was a common analysis error made for the past 30 years, which explains the persistence of the bull market (whereas excess returns should theoretically be a random walk).

In an upcoming post, I will turn to model-based approaches to calculating the term premium – affine curve models. 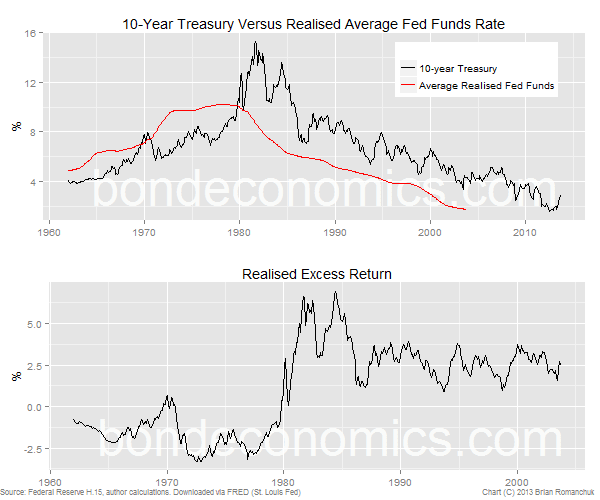 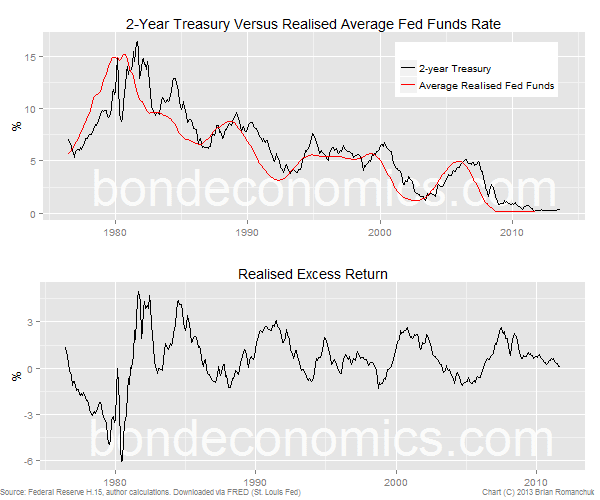