Will The U.S. Treasury Market Get A Summer Vacation? 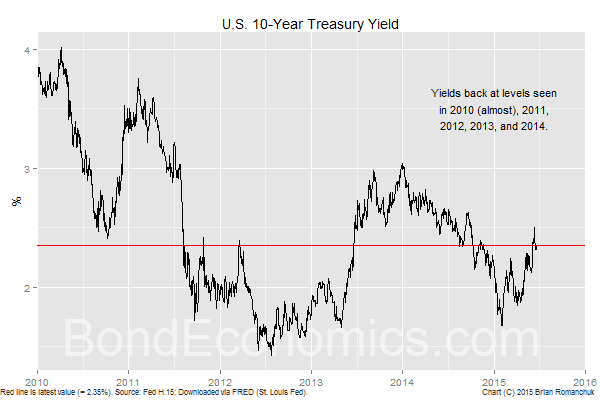 Despite rather panic-stricken headlines about bond market volatility, the 10-year Treasury Note yield is at a level which we saw in 2011, 2012, 2013, 2014, and almost in 2010. I was trained to call this a "trading range", but it is clear that I am not suited to write exciting headlines. The latest FOMC meeting verified that Fed policymakers are slowly coming around to see the world in the same way as the bond markets, in that there is absolutely no sign that U.S. economic growth is going to accelerate any time soon. Normally, one expects there to be some bond market fireworks a few months ahead of the start of a Fed rate hike cycle; the question is whether we have seen them already.

At the time of writing, there have been no announcements regarding Greece. Unless something particularly drastic happens, my feeling is that the U.S. Treasury market will shrug off the news. Until somebody else blows up, there is no reason to believe that there will be immediate contagion elsewhere. Within the euro area, almost all of the plausible outcomes will have negative longer-term consequences, but these will probably be bottled up until the next general recession hits. Absent financial accelerators, recessions take time to develop. 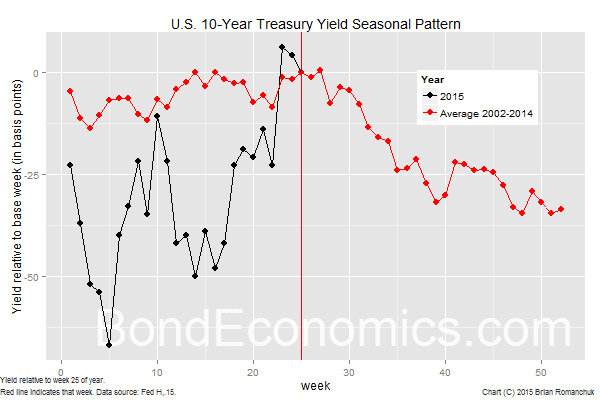 The above chart could be "the chart that keeps Treasury Bond bears awake at night!" It shows the seasonal pattern (from 2002-) of 10-year Treasury yields. On average, Treasury yields sell off during the first half of the year, and then march lower in the second half. (The fact that the Financial crisis gains happened in the second half of the year partially accounts for this bias.) This seasonal pattern is running into the pattern of bond yields rising ahead of Fed rate hikes (although the contradiction could be resolved by the Fed delaying rate hikes again.)

I discussed this seasonality pattern in an earlier article. As I noted there, we should not blindly rely on "data mining" exercises. In particular, 2013 blew the seasonal pattern out of the water.That said, the bond market may have gotten too exuberant about future growth over the past few months, particularly when the euro area is determined to shoot itself in the foot. 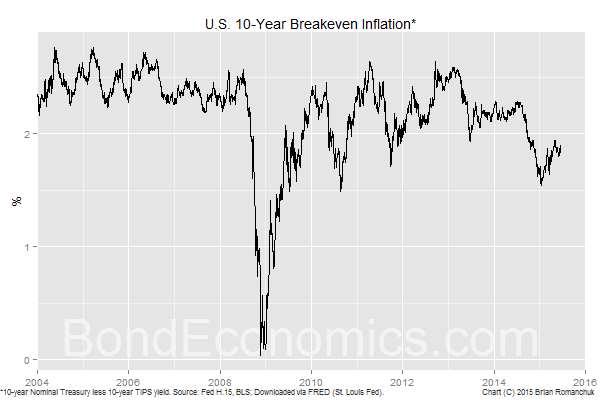 The 10-year breakeven inflation rate has creeped up this year, but it is still below 2%. (Based on Fed H.15 fitted curve data, which may or may not match breakeven rates on particular bond issues.) (My primer on breakeven inflation is found here.) This puts TIPS (U.S. inflation-linked bonds) in a relatively attractive versus nominal bonds. Inflation-linked bonds have typically been a good place to hide during bond bear markets, and valuation appears to be on TIPS side.

In the short term, the real yield on TIPS (some prefer to call it the "indexed yield", as a bond real yield often is defined differently) has a loose relationship with nominal yields. They can move in the same direction or in the opposite direction, depending upon the whims of market technicals. But if we isolate rapid movements in one direction, the yield on index-linked debt typically moves less. (In bond market parlance, the yield beta is less than 1.) This means that TIPS underperform in a rally, and outperform in a sell off.

The 2008 period saw catastrophic underperformance of TIPS, as seen in the drop in 10-year breakeven inflation near 0%.) A lot of people had the bright idea then of buying lots of index-linked bonds using leverage, since oil prices were (allegedly) on a one-way trip to $250/barrel. Being long risky assets using leverage was not particularly beneficial for your investment performance in late 2008, and so the inflation-linked market got cleaned out. This episode's behaviour was relatively unusual, and so it needs to be treated as a special case.

Fundamental valuation concerns limit the relative performance of index-linked bonds. The breakeven inflation rate cannot get too far from long-term inflation expectations, which have been stable since the early 1990s. Although I am not excited about growth prospects in the developed economies, inflation rates have been steady despite the massive output gaps. Since there are no new sources of cheap oil being found, it seems reasonable to expect that headline CPI can average more than 2%/year for the next 10 years.

Email ThisBlogThis!Share to TwitterShare to FacebookShare to Pinterest
Labels: Bond Market, Linkers, US