The rally this year has blind-sided investors and strategists. Explaining why the rally occurred is a current topic of debate. I see a number of different explanations for the rally. But one explanation that we can rule out is market seasonality.

The most interesting possible explanation is that it reflects an incipient global recession. I cannot rule this out, as I do not have a good handle on what is happening in the Chinese economy. But based on the few developed countries I am currently following (not counting the euro periphery), I do not see strong evidence (yet) of a recession on the horizon. In this group, Canada is an exception, as growth is currently very weak, and residential construction is vulnerable.

If we discount a potential recession, it seems "positioning" and negative carry are the most likely explanations. Investors were all on the same side of the trade (short duration). And these are hard positions to sustain, as they carry and roll negatively, even if you start looking at more complex trade structures that lower the carry cost. With rate hikes about a year off, these short duration positions were easily squeezed.

There has been some talk of the "terminal rate" for the policy rate (Fed Funds) being lower - closer to 2-3%, rather than 4%. This is possible, but I have some doubts that the Fed would voluntarily stop hiking rates at those levels if the economy is continuing to expand. (The terminal rate cycle could be lower if the rate hike cycle is cut off by the next recession.)

In recent years, some analysts noted a seasonal pattern to 10-year Treasury yields. Yields typically rose a bit during the first half of the year, but then fell after mid-year. It was possible to do some data mining and find dates where if you entered long duration positions over some interval you historically made money most of the time. This does not make sense if markets are efficient. If we assume market efficiency, entering into long positions on arbitrary dates during a year should only have a 50-50 chance of making money. 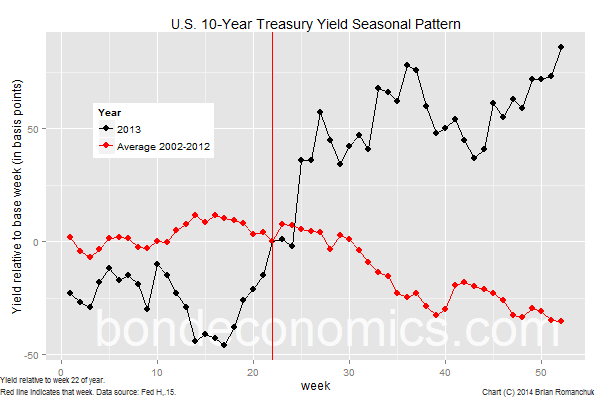 Unfortunately for anyone who invested based on that seasonal pattern, the events of 2013 blew it out of the water. In the chart above, the black line shows how the 10-year yield moved relative to the 22nd week of the year (the week of the year at the time of writing). Yields shot higher around mid-year, which would have generated crushing losses for long positions. The red line shows the average change for the the previous 10 years relative to week 22. We see that there was a tendency to rally from about now. 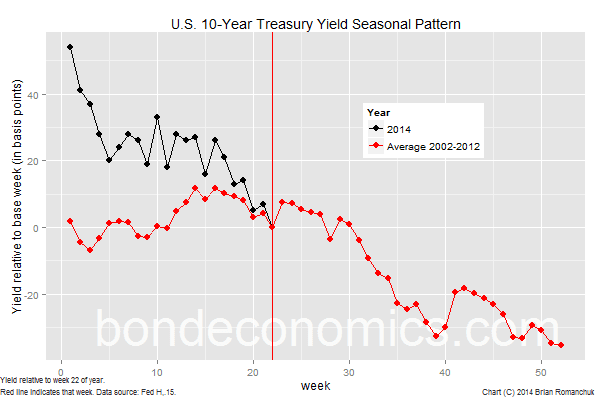 This is a good example of the importance of looking at valuations rather than getting cute with mining price data.