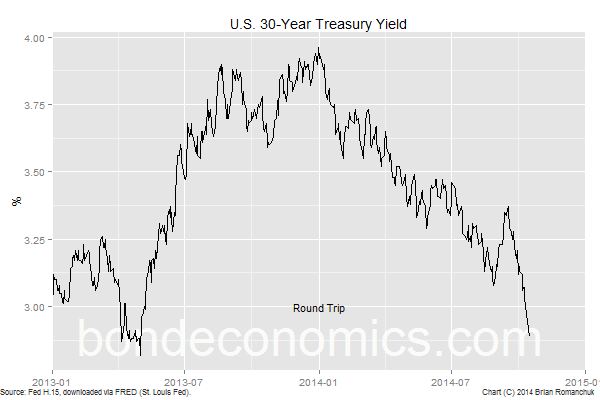 The panic in risk asset markets - and rally in good quality government bonds - may be the result of investors being poorly positioned going into year end. That said, economic developments outside the United States are poor, and so there are fundamental reasons for weakness in those markets. The drop in oil prices, normally a boon for the United States economy, will now have a mixed impact, courtesy of the boom in drilling.

Outside The United States - Not So Rosy


The United States economy was able to shrug off overseas problems, such as during the Asian Crisis of 1997. Weaker global growth normally brings lower oil prices, which acts as a reprieve for the American consumer. What is different this time is that "Saudi America" has been partially propping up its economy with manic drilling activity (as discussed here), so it is unclear how positive lower oil prices are at this point.

Even if this latest upset is just another example of the financial instability that the United States has lived with since the mid-1960s, a retrenchment the shale oil sector will hurt one of the few regional economies that has been booming in recent years. This impact will be cushioned by the boost to spending on non-energy products as a result of lower gasoline bills for consumers nationwide. This will rebalance the United States economy, which will probably eliminate inflation risks. (Whatever inflation is being seen has been the result of a few overheated sectors and regions.) This would allow the Fed to remain on hold even longer, which is not what bond bears want to hear.

The Fed will wait for hard data before doing anything. But it will be difficult for them to make hawkish noises right now, even though forward rates are even lower than when they were arguing that the markets were too dovish about the path of the Fed Funds rate a few weeks ago. This episode is a good example of why real world central banks should stop listening to academics about their theories regarding forward guidance.