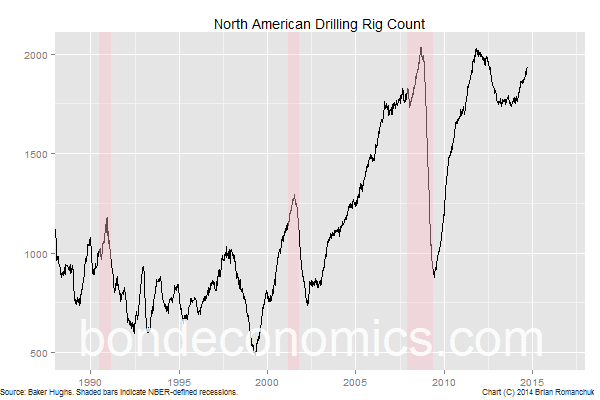 One of the developments in the North American real economy which is of extreme importance for forecasting is the surge in oil and gas drilling activity. Although the number of people directly employed in drilling is minuscule, there are multiplier effects along the supply chain. What is ominous about this activity is the track record of fixed investment in North America since at least the early 1980s - every large surge in fixed investment turned out to be a bubble that precipitated a recession when it deflated.


I have just written about Peak Oil (in the form of a book review), As I noted, Peak Oil has been declared dead, partially as the result of the rise in North American fossil fuel production. The chart above shows the number of rotary drill rigs operating in North America, which is produced by Baker Hughs. Very simply, if you drill a lot more, you can increase output. This may have surprised some mechanistic projections of production peaks, but this possibility was always understood to be possible.

The question is whether this activity is profitable. Despite the hype about technological advancements, the rise in production appears mainly to be the use of brute force on sources that previously were viewed as economically marginal. A rapid rise in production, aided by the front-loaded nature of "fracked" wells (they have large initial flows, but deplete relatively rapidly), may have lead to too-optimistic projections by investors who are desperate to hit long-term growth targets. 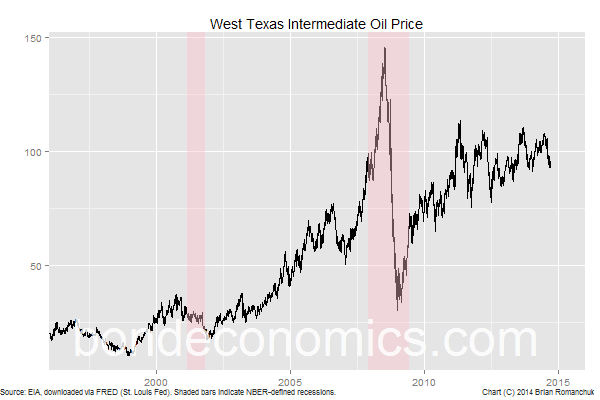 I lack the expertise to judge the profitability of this activity, although the recent dip in oil prices is not helpful for these high cost producers. But from the point of view of macro analysis, it would not be too surprising that this surge in drilling was a finance-driven bubble. All of the major fixed investment surges in the United States since the 1980s - the Savings and Loan bubble, the late 1990s technology boom, and then the housing bubble - proved to be unsustainable, despite considerable cheerleading from within the financial sector.

The telecommunications boom during the Tech bubble is instructive.  The communications infrastructure that was built out during the boom was eventually used by bandwidth-hungry social media and smart phones. (The bulk of the internet dot-coms turned out to be dogs, but those were not real companies with actual fixed investment. Their market capitalisations just represented shuffling of worthless equity claims amongst "investors".)  But it should be noted that in many cases, the infrastructure is now being operated by other companies, as the original builders went bust. (In some places, incumbent operators managed to stay alive despite the lousy economics of the infrastructure boom.) Similarly, energy investments should eventually pay off, as conventional fields deplete away. But I fail to see the point of digging a well that will deplete in five years based on the theory that oil prices will be a lot higher in thirty years time.


At the time of writing, it is the first day of a two-day Fed meeting. The possibility exists that the bond market could back up courtesy of a change in language describing the timing of the first rate hike. Since I think that a Fed rate hike in 2014 is totally improbable, the only debate around rate hikes is during the meetings of early 2015. Why would the Fed care about what it said in a statement in September 2014 in 2015? Does the Fed in September 2014 have better information about the state of the economy in 2015 than it will have in 2015?

The level of the Fed Funds rate now does contain forward-looking information. By sticking it close to 0% now, the Fed is telling us that it thinks that activity will not expand enough in the near future to pose inflationary risks. However, this is based on information that is now available; the projection of the future is essentially built upon extrapolating current trends.

Academic monetary policy purists would object strongly to that characterisation; the theory of monetary policy is based upon the interactions with rational agents that project economic behaviour until the end of time. However, that thinking is largely based upon models with a single good (or composite good); in such a framework, it is effectively impossible for agents to make investment errors, as higher production always increases utility. In the real world, it is entirely possible for investors to figuratively pour money into the ground with nothing to show for it.

It is unclear to me that a reversal in drilling activity would be enough to throw the United States into recession. But even if it was possible, the Fed would not base monetary policy on such an outcome, Rather, it will extrapolate growth trends, and try to guess what is happening to the output gap. This backward-looking behaviour is enough to deal with inflation, which is a lagging economic variable. But if you want to forecast economic activity, it is necessary to wrestle with the more difficult questions about the sustainability of investment activity.

Email ThisBlogThis!Share to TwitterShare to FacebookShare to Pinterest
Labels: Commodities, Peak Everything